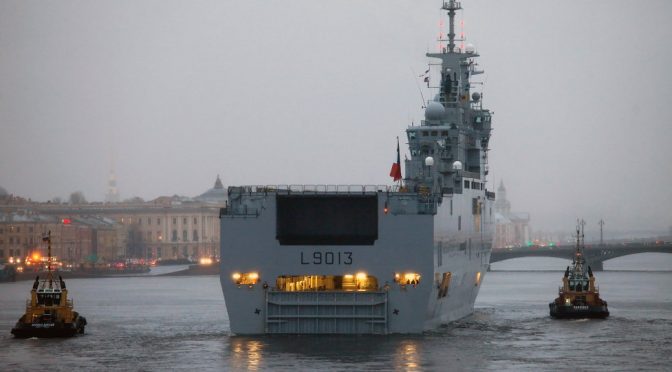 It is very interesting to see Russia giving some leeway to France by giving the latter some more time to think about fulfilling its obligation on the Mistral Deal.
This could be the reason… more pressure to the Cabal.

First Germany, then the Netherlands, perhaps Switzerland this weekend, and now the French right-wing Front National, which shockingly came first in May’s European parliament elections, and whose leader Marine Le Pen is currently polling in first place in a hypothetical presidential election (in both a first and run off round), ahead of president Hollande, has sent a letter to the governor of the French Central Bank, the Banque de France, demanding that France join the list of nations which have repatriated, or at least tried to, their gold.
From her letter, here is the full list of French demands (google translated):

Her full letter below (link)
Mr. Christian Noyer
Governor of the Banque de France
31 rue Croix des Petits-Champs
75049 PARIS Cedex 01
Nanterre, November 24, 2014
Open letter to Mr Christian Noyer on the gold reserves of France
Dear Governor
On behalf of the French and in my capacity as the main opposition leader, I am writing to you because it is my duty to present a petition on the gold reserves of France, under the best interests of our nation.
Even before the outbreak of the 2008 crisis, the National Front had anticipated and informed the political institutions of the future worsening of the macro-economic and geopolitical context. As part of the business model increasingly libertarian adopted by France under pressure from Brussels, no economic fundamentals may not sustained improvement. All French can see that the austerity policies demanded by the EU and the ECB and implemented by the government are a proven failure and serious for our country.
The monetary institution you lead a historic mission to be the custodian of national central bank monetary reserves including gold reserves. According to our strategic vision and sovereign, they are neither the state nor the Bank of France but the French people and in addition serve as the ultimate guarantee of public debt and our currency.
In monetary Cold War played between the Western countries and the BRICS countries, gold gradually takes an important role. According to the World Gold Council, China’s official gold reserves, India and Russia have increased significantly between 2007 and 2013.
For these reasons and because of the rapid growth of global systemic risk, it is of utmost importance to the future solvency of our nation to engage, by mid-2015, a detailed audit procedure, the results will be the subject of a report. This report must obtain validation of French macro-prudential authorities, ACPR, and will be made public in the year.
This comprehensive audit should contain:

Furthermore:
Whereas, on 30 November, will take place in Switzerland a vote on a request from popular initiative referendum “Save gold for Switzerland” of the UDC party (Democratic Union of the Centre) which provides for the repatriation of their reserves of gold on their soil.
Whereas at the request of some national central banks informed, this country phenomenon for the “return of national gold reserves” and democratic control exists since 2013 in Germany (Bundesbank), Poland etc.
Whereas the Dutch Central Bank recently said it had repatriated 122.5 tons of gold.
Whereas, on 19 May 2014 the Bank of France along with other banks of the Eurosystem, announced it has signed the Washington Agreement gold sales CBGA 4 (Dirty Gold Under the Central Bank Gold Agreements) which provides no transfer of quotas on this five-year period (2014-2019), in contrast to the three previous agreements.
Whereas in fact, the Bank of France already independent, conducted as part of the agreement CBGA 2 on gold sales agreed in 2004 by Nicolas Sarkozy, then Minister of Economy and Finance of the Raffarin government .
The declared official target of more actively manage the foreign exchange reserves of the state to generate € 100 million in additional tax revenue in 2005. N. Sarkozy also said that gold sales would be used “either to finance investments that prepare the future, either to reduce the debt, but in no case to fund operating expenses. ”
Over the period 2004-2012, about 614.6 tonnes of gold were sold by France, while at the same time the other central banks of the Eurosystem with the ECB have agreed to limit their gold sales. According to a report of the Court of Auditors in 2012, this operation is extremely costly for public authorities and constitutes a serious violation of the national heritage, made without any democratic consultation.
Mr Governor, according to your statements, “gold remains an important element of global monetary reserves.” For the French, you are considered the ultimate guarantor of the security of this gold reserve and therefore the stability of our currency and national financial stability. As a result, your responsibility is huge.
Also, depending on the situation we discover, I urge you to do it:

The implementation of these measures is crucial for the future of France face socio-economic problems that may occur.
Just like your heroic predecessors of the Bank of France in 1939 and 1940 had organized the evacuation of French gold, you need to undertake this vast national treasure of the security operation, patriotic act which will be recognized in due time by the public opinion.
I sincerely hope that, respectful of your duties as a senior official in the service of the state, you demonstrate lucidity and courage necessary for the defense of the general interest of our country. The stakes are high, it is the future of France in question!
Please accept, Excellency the Governor, the assurances of my highest consideration.
Marine Le Pen
source »

Russia is not planning to file any claims at the moment over the Mistral warship delivery by France, Russian deputy defense minister said.
MOSCOW, November 25 (Sputnik) — Moscow currently has no plans to file claims against France over Hollande’s decision to put the Mistral warship deal on hold, Russian Deputy Defense Minister Yuri Borisov said Tuesday.
“No, we are not planning to file any [claims] at the moment,” he said. “Everything is specified in the contract, and we will act under that contract, just like all civilized people do.”
Earlier on Tuesday, the French government said in a statement that Hollande “believes the current situation in eastern Ukraine does not allow the transfer of the first Mistral to Russia.”

Russia and France signed a $1.6 billion deal for two Mistral-class ships in June 2011. The handover of the first ship, the Vladivostok, was scheduled for November 14, but did not take place.
Earlier in November a senior ranking source told RIA Novosti that Russia will give France until the end of November to deliver the first Mistral-class ship and will make serious legal claims if Paris fails to fulfill its contractual obligations.

Relations between Russia and Europe deteriorated with the escalation of the Ukrainian conflict, as the West accused Russia of meddling in Ukrainian affairs, a claim repeatedly denied by Moscow.
Addressing the issue of Russia’s relations with France at the G20 summit in Australia, Russian President Vladimir Putin noted that the long-term productive relations between the two countries should not be damaged by the “turbulent” times in world political affairs and that both Russia and France must do everything possible to minimize potential risks for bilateral relations.
source »