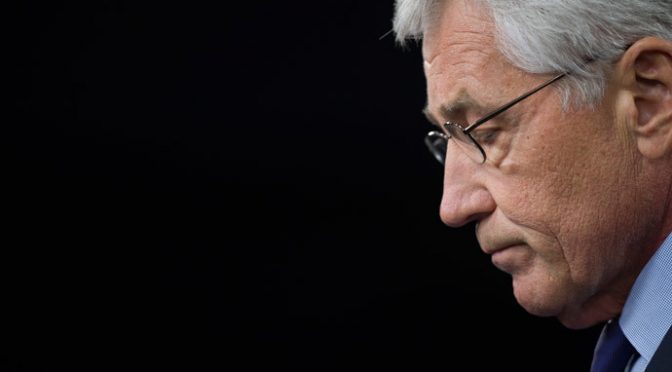 Flanked by US President Barack Obama and the vice president during a Monday morning announcement, Hagel, 68, acknowledged that he submitted his resignation, confirming reports that started to circulate earlier that day in the press.
[youtube https://www.youtube.com/watch?v=uG-Drp0gltE]

Hagel, whose resignation was accepted by the president, called leading the Department of Defense “the greatest privilege of my life.” He took office as defense secretary in February 2013 and previously spent more than a decade in the US Senate. Due to his previous opposition to the 2007 surge policy in Iraq and statements critical of the Israeli lobby in the US, his confirmation was met with significant controversy. Following Monday’s announcement, Hagel will have served just longer than the 20 months his predecessor Leon Panetta held the position.
“For nearly two years, Chuck has been an exemplary defense secretary, providing a steady hand as we modernize our strategy and budget to meet long-term threats while still responding to immediate challenges like ISIL and Ebola,” Pres. Obama said Monday. “Thanks to Chuck, our military is on a firmer footing engaged in these missions and looking ahead to the future.”
Hours before the Monday presser, the New York Times reported that the outgoing Defense chief is stepping down under pressure following the massive mid-term losses suffered by the Democrats this month and the national security team’s inability to keep ahead of a series of global crises, citing senior White House officials. CNN also reported that Hagel has clashed with the White House recently over alleged “micromanagement” issues within the administration.
A senior defense official told the Associated Press that both Hagel and Obama had “determined that it was time for new leadership in the Pentagon” following weeks of discussion. From the White House this week, the president said “it was an appropriate time” for Hagel to step down, having guided the Dept. of Defense through a transition during the last 21 months that shifted focus towards new emerging threats in the wake of the Iraq War.

With a military background and less hawkish view of international affairs, Hagel was viewed as the ideal candidate to bring major US combat operations in Afghanistan to an end while managing a leaner Pentagon amidst deep defense cuts.
Recent events, however, including the rise of so-called Islamic State group, also known as ISIS, or ISIL, and the worldwide Ebola epidemic, “required a different kind of focus,” senior officials told the New York Times.
With the White House ramping up its military operations in Iraq and Syria, one longtime associate of Hagel told ABC news the writing was on the wall.
“He took the job to end the war–not start another one,” this associate of Hagel said.

Hagel’s departure could both signal the White House is ready to carry out a more aggressive foreign policy, while also signaling to critics that the Obama administration is receptive to criticism of its perceived mishandling of recent events.
It remains unclear who is slated to replace the outgoing defense chief. According to the NYT, Michele Flournoy, the former under secretary of defense; Senator Jack Reed, Democrat of Rhode Island and a former officer with the Army’s 82nd Airborne; and Ashton B. Carter, a former deputy secretary of defense, are all likely candidates.
A senior administration told ABC news that a successor “will be named in short order.” Meanwhile, Hagel said he will stay in his current role until a replacement can be confirmed by the Senate.
Hagel’s predecessors, Defense Secs. Robert Gates and Leon Panetta, both published memoirs shorty after exiting the Obama administration in which they criticized the president’s leadership over the military.
continue reading »