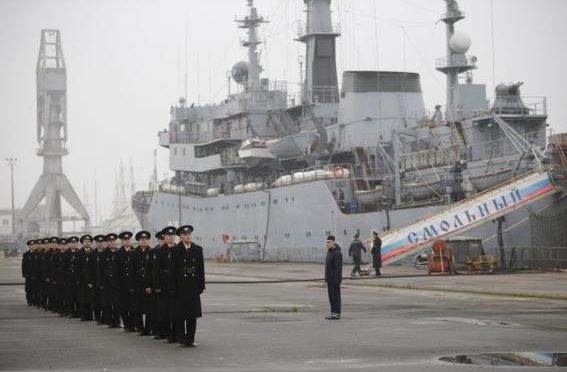 This is another Fulford confirmation re UK joining the BRICS…

The French delivery of two Mistral ships to Russia may be postponed indefinitely (a move which ultimately would cost Hollande over $4 billion in contract breach penalty fees he simply can’t afford to pay), but that doesn’t mean the Russian navy has been hobbled or is hiding in the corner. To the contrary: according to the following tweet from the UK Ministry of Defense, Russia’s navy is getting quite bolder.

What happened?
As Bloomberg reports, at least 4 vessels which departed the Russian Northern Fleet main base on November 20, led by anti-submarine ship Severomorsk, entered English channel for exercises that include anti-sabotage training, damage control in case of fire and water intake, state-run news service RIA Novosti says, citing statement from Navy.
Reuters confirms that a squadron of Russian warships entered the English Channel on Friday to hold exercises, RIA news agency reported, the latest apparent show of military might since ties with the West plunged to Cold War lows over Ukraine.
RIA quoted the Northern Fleet as saying its vessels, led by anti-submarine ship Severomorsk, had passed through the Strait of Dover and were now in international waters in the Seine Bay to wait for a storm to pass.
“While it is anchored the crew are undertaking a series of exercises on how to tackle … infiltrating submarine forces and are training on survival techniques in the case of flooding or fire,” RIA quoted the Northern Fleet as saying in a statement.
The Russian navy could not reached for comment and the Defence Ministry declined to comment on the report.

The Russian navy frigate Smolny is seen at the STX Les Chantiers
de l’Atlantique shipyard site in Saint-Nazaire, western France, November 25, 2014
Naturally, NATO – afraid of looking even weaker than it is – was quick to downplay the incident since a lack of retaliation would make the defensive alliance appear quite prone to “penetrations” by Russian forces:
France’s navy confirmed the location of the ships and said it was not unusual to have Russian warships in the Channel.
“They are not holding exercises. They’re just waiting in a zone where they can be several times a year,” said the French Navy’s information service.
Lieutenant-Colonel Jay Janzen, NATO’s military spokesman, also said the alliance was aware of the Russian ships’ location.
“Our information indicates that the ships are transiting and have been delayed by weather conditions. They are not exercising in the Channel, as some Russian headlines would have us believe,” he said.
And if they were in fact “exercising” it would simply mean that NATO exercises in the Black Sea miles away from the Russian coast, are finally being met in kind by a Russia which with every passing day is making it clear its “concern” of western reprisals and retaliation to Russian actions, which in turn are a consequence of NATO expansion eastward, is increasingly more negligible.
source »