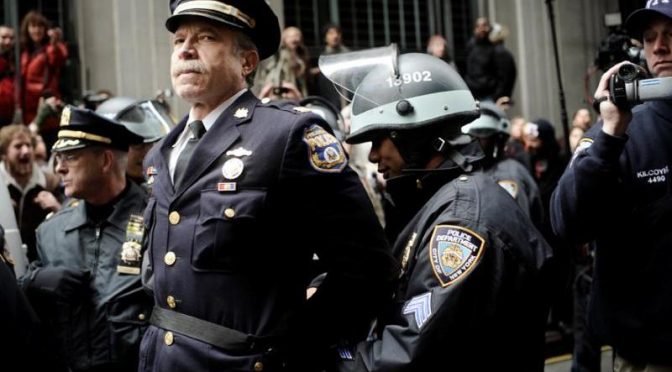 “It’s an oppressive organization now controlled by the one percent of corporate America. Corporate America is using police forces as their mercenaries,” Lewis said during a recent interview.
“In such divisive times it’s important for people to realize this isn’t a black vs. white issue, but a blue vs. everyone issue,” writes investigative journalist Jay Syrmopoulos. “When a former cop is willing to cross the ‘thin blue line’ in an attempt to help wake people up to the reality of the American police state, the least we can do is help him spread this important message by sharing his words of wisdom in hopes of awakening others.”
Mr. Lewis underscores the fact police have never served the public and are acting at the behest of fascist corporations and banks, the very institutions that have controlled the nation and ruled over its political system for decades.
“The American legal system is rooted in English common law, and the modern American policeman harkens back to English sheriffs, who were paid by and accountable to the government, not to the community,” writes Wendy McElroy. “The main purpose of the sheriff was to enforce what were called ‘government decisions.’ Maintaining public order was also a concern, but ‘order’ was defined by the government.”
[youtube https://www.youtube.com/watch?v=BgweRroogKg]
Government decisions are now made by transnational corporations and banks. This was admitted in 2009 by an exasperated Dick Durbin, the Senior Democrat senator from Illinois, when he said banks “frankly own the place” and are “the most powerful lobby on Capitol Hill.”
Banks used mercenary cops to wipe out a misguided and muddled Occupy movement when it went after Wall Street. Homeland Security, supposedly designed to combat an illusive terrorist threat, coordinated the government response that ultimately destroyed the movement. JP Morgan Chase, one of the largest bankster operations in the world, showed its gratitude when it donated $4.6 million to the New York police.
Ferguson Playing Into the Hands of the State
If the Ferguson movement sincerely wished to end mercenary cop violence and brutality it would expose this connection between the corporate state and the police.
As McElroy notes, the concept of an organized and tax payer funded police force was first introduced by the British in 1786 in Dublin for the explicit purpose of quashing what the state considered disorder. “In this as in other social measures, Ireland acted as a testing ground for what would later become policy in England,” McElroy writes.
“The modern policeman is, in fact, the antithesis of Marshal Dillon and an expression of the stereotypical British sheriff — a civil servant responsible only to government and governmental policy,” she adds.
The United States Constitution initially prevented the federal government from controlling state and local law enforcement, but this has changed over the last few decades as a centralized federal government has incrementally exercised its monetary influence over police, especially after 9/11.
Unwittingly or not, the activists and protesters in Ferguson are creating a situation that will ultimately result in a strengthening of mercenary police control over the citizenry. By engaging in criminal activity – much of it, such as looting, praised by white intellectuals – and promoting discord and violence along racial lines, the activists are forcing average Americans (who are denigrated as racists) into a position where they will ultimately demand police protection, although, as McElroy and others have noted, that protection is at best illusory.
Short of comprehending the true nature and role of mercenary cops – the protection of a corporate-fascist state and, most importantly, as a weapon against organized opposition – the Ferguson activists and their followers are playing right into the hands of the state.
source »