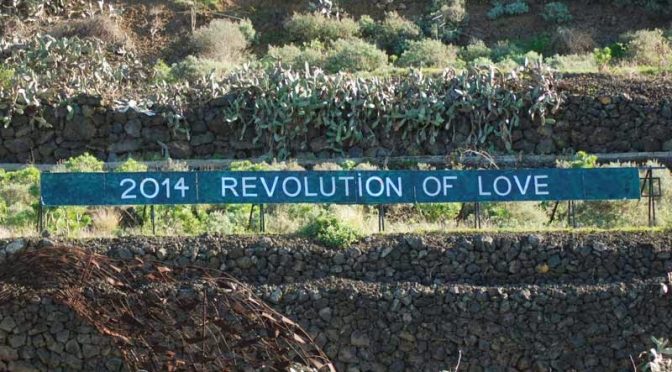 Although there are persistent attempts to steer the ongoing awakening to suit a corrupt, selfish agenda, there exist a third force which is so determine, unrelenting in its purpose for unified evolution, a far greater force that encompasses all of us.

“Greetings. We are from the future.
Everything is going to be alright.
You are about to undergo a staggering revolution…
Many have called for this revolution, but few understand what it truly means.
This coming revolution is part of a great progression towards an awakening of staggering proportions.
Life force is the creative self-organizing intelligence orchestrating all of this behind the scenes.
Life force is experienced by you as the feeling of Love – for Life and Love are the same.
What humanity is about to become is quite inconceivable to you right now,
But we are here to help make this transition a little easier.
[ YOU ARE NOT ALONE. ]

Like gyroscopic force stabilizes a motorcycle – Life force [Love] stabilizes all living systems.
Populations full of love, cultivate honesty, courage and generosity, self-organizing and self -regulating without the need for coercive control.
Populations with deficits in love succumb to fear, violence and corruption, inviting coercive governments to combat the chaos and entropy that arises in the absence of love’s organizing intelligence.
Just as Life force is experienced as love, entropy is experienced as ego, hatred and fear.
The corrupt and power hungry feed on this fear.
Without enough gyroscopic force to keep it upright a motorcycle falls, likewise without enough love to keep them upright free and idealistic governments fall.
Populations too fearful, selfish and chaotic to stand on their own, invite despotic governments to forcefully rule and stabilize them like a kickstand for those who’ve lost their minds.
As long as a population has more fear than love, what appears to be democracy is often little more than a spectacle to mesmerize the masses.
Autocratic power still operates behind the scenes. Its media directs people’s unconscious fears and aggressions towards invented enemies, insane competitiveness, rabid consumerism and addiction.
THIS SYSTEM WILL SELF DESTRUCT.
This system glorifies the ego, the embodiment of entropy, which convinces you that you are alone against the world, causing alienation, fear and aggression.
The core values of your culture have been hijacked, forging a pathologically antisocial anti-ecological system obsessed with profit, power and control.
THIS SYSTEM WILL SELF DESTRUCT.
Real change must now come from outside this system.
Real change must now come from you.
Just as free and idealistic governments can’t survive the entropy of populations filled with fear Egoic coercive governments can’t survive the creative self-organizing power of people filled with love.
Gandhi called this power soul force, life force, love force. It is the fundamental force behind all nonviolent revolution and the unassailable creative intelligence of Life.
True freedom and equality requires a population alive with this self-organizing intelligence.
The coming awakening happens in stages.
And the next stage… is THE REVOLUTION OF LOVE.
Love is the organizing force behind all that is beautiful, joyful and creative in this world.
Power structures are merely the reflection of a population’s levels of love or fear.
But true love casts out all fear making graceful revolution not only possible but inevitable.
so the next stage… is THE REVOLUTION OF LOVE.
When you unleash the sentient energies of love, then, for the second time in history the world, humanity will have discovered fire.
The fires of love will spread through all people, thus all systems shaping the world in its own image.
Love is a force of nature. And so are you.
The coming singularity happens in stages.
and the next stage… is THE REVOLUTION OF LOVE.
The love that fuels this revolution starts with you.
You can become an agent of love, allowing it to guide you and govern your actions.
Love is increased through communion, song, mindfulness, prayer, humor, forgiveness and connection.
(We will reveal more in future transmissions.)
For now, communicate to every sentient being you encounter:
I see you.
You are not alone.
We are in this together.
You are loved.
The revolution of love is here – and all is well.
So… Let there be Light!”

Science: “Quantum mechanics explains efficiency of photosynthesis”
“Energy transfer in light-harvesting macromolecules is assisted by specific vibrational motions of the chromophores,” said Alexandra Olaya-Castro (UCL Physics & Astronomy), supervisor and co-author of the research.
“We found that the properties of some of the chromophore vibrations that assist energy transfer during photosynthesis can never be described with classical laws, and moreover, this non-classical behaviour enhances the efficiency of the energy transfer.”
“The negative values in these probability distributions are a manifestation of a truly quantum feature, that is, the coherent exchange of a single quantum of energy,” explained Edward O’Reilly (UCL Physics & Astronomy), first author of the study.
“When this happens electronic and vibrational degrees of freedom are jointly and transiently in a superposition of quantum states, a feature that can never be predicted with classical physics.”
http://www.ucl.ac.uk/news/news-articl…
Text from video:
“Greetings… We are from the future. Everything is going to be alright. The future is a beautiful place … But you will need some training in order to inhabit it.
In the future – technology evolves faster than any human mind can think. When the singularity occurred. We became like gods – able to create entire worlds in the blink of an eye.
Every thought had drastic immediate impact. All of our dreams became a reality – but so did our nightmares. The future became a battle of ideas. We had to learn to direct our minds – to prevent dark psychological forces – from destroying all of us. Now with every new world we create, we summon the sacred imperative of mind… “Let there be Light.”
“How can we be from the future?” you might ask. Let us explain. Plants harvest light with near perfect efficiency. You may not realize it, but this is impossible under classical physics. Along the way to the photosynthesizing core – photons of light should collide with other particles, but they don’t. A photon succeeding in reaching the core is as likely – as you sprinting blindfolded through a dense forest – reaching the center without striking a single tree.
Plants are engaged in a kind of miracle. The plant puts the photon into a state of quantum superposition, multiplying it by every route that photon could possibly take. Imagine – blindly sprinting through a forest – being multiplied into every one of the billions of possible paths. If any one of your possibilities were observed hitting a tree, the superposition would collapse – and that would be your final outcome, but the plant patiently refuses to observe any of these casualties – while at it’s heart it sings…”Let there be light.”
When any of the possibilities finally reaches the core without fail, only that winner is observed. All the other possibilities disappear. The winner is transmitted back through time – from the future – and becomes the only possibility that ever existed. This is how photons reach the plant’s core with impossible precision. This is how you – and every organism in existence – overcame the massive improbabilities of life. — This is how we are from the future. This is how you will become the light of the world … as we invoke the sacred imperative together … “Let there be light.”
“Greetings. We are from the future. Everything is going to be alright. The future is a beautiful place. But you will need some training in order to get there…”

One thought on “The Next Stage is the Revolution of Love”