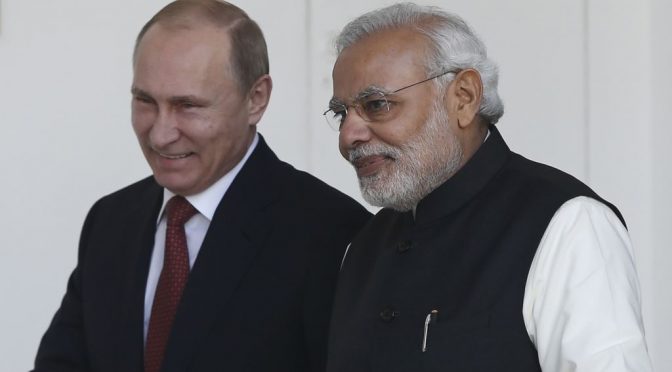 Science is like a two-bladed sword; it can be used to build and destroy things. It is the intention and purpose that really matters.
In the case of the BRICS, they are moving away from the destructive use of scientific knowledge. It is now up to the West to reciprocate.

The new draft of the Russian military doctrine doesn’t provide for the possibility of a preemptive nuclear strike, news agencies report quoting unnamed sources in the Defense Ministry.
“The renewed draft of the military doctrine would not have a reservation for preventive nuclear strikes on potential enemy. Article 198 of the document is very precise on the conditions under which Russia can use the nuclear weapons,” a person involved in the preparation of the new doctrine told the Interfax on Wednesday.
“It would become possible if the sovereignty and territorial integrity of the Russian Federation are under threat.”
RIA Novosti confirmed the report on the same day, quoting a high-placed source in Russia’s Security Council. The source said that the military had repeatedly suggested including the possibility of a pre-emptive nuclear strike on potential aggressor nations or blocs, but the current draft features no such option.
The Russian military doctrine, approved in 2010, also lacks the provision for a preemptive nuclear strike. It states: “The Russian Federation reserves the right to use nuclear weapons in reply to strikes with nuclear weapons or other weapons of mass destruction on its territory or on the territory of its allies. A strike is also possible in case of an aggression with use of conventional weapons that put the very existence of the Russian Federation into question.”
The doctrine gives the right of final decision on nuclear strike to the president.
This September, President Vladimir Putin charged senior military and state officials with the task of developing an updated military doctrine that would match the changing global politics and modern military challenges. The deadline is the end of the year. Officials involved in the project earlier told the press that the new doctrine would take into consideration the new dangers and threats, in particular those manifested in the so-called Arab Spring, the civil war in Syria and the ongoing crisis in Ukraine.
Last year, Russia’s official in charge of defense industry, Deputy PM Dmitry Rogozin, told reporters that Russia will use nuclear weapons if it comes under an attack, adding that this possibility serves as the main deterrent to potential provocateurs and aggressors.
“We have never diminished the importance of nuclear weapons – the weapon of reprisal – as the great balancer of chances,” Rogozin said.
The comment came in reply to reports about the United States’ Conventional Prompt Global Strike (PGS) strategy. Back then, Rogozin promised Russian lawmakers that the Fund of Perspective Researches (FPI) will develop a plan of military response to the PGS strategy, but refused to disclose any details or deadlines.
source »

http://rt.com/business/213411-going-nuclear-russia-india/
Russia and India are ramping up energy ties and will construct at least 12 new nuclear reactors by 2035. Two will be completed by 2016 at the Kudankulam Nuclear Power Plant, Russian state-owned power company Rosatom confirmed Thursday.
“This morning a general framework agreement was signed on the construction and equipment delivery for the third and fourth blocks of the Kudankulam Nuclear Power Plant at the present site. Cement foundations [for the new blocks] will be poured in the beginning of 2016,” Rosatom head Sergei Kiriyenko said Thursday, as quoted by Sputnik news agency.
In April, Russia and India agreed to begin phase two of the Kudankulam plant, which includes adding Block 3 and Block 4. It is the only nuclear power plant which meets all the ‘post-Fukushima’ safety requirements.
“Today we will sign a strategic document that foresees the construction of no less than 12 nuclear reactors over the next 20 years, or in other words this would be no less than two nuclear power plants,” Kiriyenko said.
Talking at a press briefing in India President Putin said the two countries had signed ‘a very important’ agreement to construct the total of more than 20 nuclear reactors.
“We have reached a new level of cooperation. This isn’t just about trade and services, but this is the creation of the new industrial branch,” he went on to say.

Nuclear cooperation between Russia and India has been on the rise, and has been a main topic of discussion during Russian President Vladimir Putin’s official visit to New Delhi December 10 -11. Putin and Indian Prime Minister Narendra Modi will also discuss at $3 billion helicopter deal, oil exploration and supply, infrastructure projects, and diamond sales by Alrosa, the Russian state-owned diamond company, to India.
[soundcloud url=”https://api.soundcloud.com/tracks/181016530″]
READ MORE: Putin: Nuclear projects core of cooperation between Russia and India
Russia and India first agreed to build the Kudankulam nuclear plant in November 1988, and the first 1,000-megawatt reactor ‘Block 1’ was completed on October 22, 2013. The second power block has also been completed, but needs to be tweaked before it can be connected to the grid. The plant is located in the southern Indian province of Tamil Nadu.
Other deals included a 10-year contract between Rosneft and Essar, India’s big international conglomerate, for the delivery 10 million tons of oil annually. The oil will be transported via ship from the Far East as well as the Baltic and Black Seas.
GLONASS, Russia’s satellite navigation system, will create a $100 million joint venture in India to help produce navigation systems and quick response receivers.
Russia will also assist in the creation of an Indian mobile phone operator.
Relations with India have become a priority for the Kremlin, as US-led sanctions have hindered diplomatic and economic ties between Russia and the West.
Bilateral trade between the two BRICS nations in 2013 was $10 billion, a small amount compared to the $90 billion Russia exchanges with China or the €326 billion it turns over with the European Union every year.
source »