Last week Gordon Duff, Senior Editor of Veterans Today delivered an Historic Keynote Speech at the International Conference on Combating Terrorism and Religious Extremism held in Damascus, Syria. This speech is sending shock-waves around the World.

Gordon Duff was part of a Veterans Today Senior Staff Delegation that traveled to Damascus and was in consultation with the Veterans Today Board and other like minded individuals within the Military and Intelligence community.
This Delegation included Veterans Today Senior Editor *Gordon Duff, Veterans Today Managing Editor **Jim Dean, Veterans Today Director Colonel ***James Hanke, and Veterans Today Financial Editor ****Mike Harris.
Gordon Duff’s speech quickly changed the focus of the whole conference and is now sending shock-waves around the World in the various Diplomatic, Military and Intelligence corps around the World.
Why is his speech Historic? For a number of reasons. This speech is the first time in history an American Intelligence Team of “non-activists” gave a military briefing to an audience of this type, including key Military Leaders of diverse Tribal Forces throughout Lebanon, Syria and Iraq, along with a Russian delegation and many others from around the world.

But even more important, Duff, a noted international Intel and Security Consultant, identified the root cause of United States of America’s dysfunctional involvement in Iraq and Syria and the true cause of ISIS/Daish.
Duff’s speech immediately changed the whole tone of the Conference and turn it to a very practical focus on the true causes of ISIS/Daish. His speech immediately shifted the focus of the Conference from theoretical discussions of Terrorism and Extremism, to what is actually going on at the ground level at a practical level, who is responsible and why.
Gordon Duff laid out the true cause of ISIS/Daish in simple terms for the very first time anyone has ever done so publicly and this disclosure from such a highly credentialed and credible Intel Professional is now sending shock-waves around the World.
Duff declared that there are far too many that have died to continue speaking in unclear terms and that it was time to share a key hypothesis based on signals intelligence.
What is going on in Iraq and Syria with ISIS is not Terrorism, it is simply CRIME. That is, it is the works of an international Crime Cabal which has gotten control of the American Congress.
Duff identified this Crime Cabal as Israeli and pointed out that this is Worldwide Crime on a scale never experienced before.
Duff explained how the Supreme Court Decision of Citizens United made it possible for an Israeli-American Organized crime magnate now operating out of Macao, Sheldon Adelson to essentially buy control of both Houses of Congress in the last election and being able to bring Congress under control of this International Crime Syndicate which specializes in human trafficking and narcotics.
Duff also identified American Generals McInerney and Vallely as being involved in organizing Daisch along with Senator John McCain.
He also pointed out that Secretary of Defense Chuck Hagel [who has just resigned] was the one that prevented the American bombing of Syria in response to the False-Flag gas attack at Aleppo, Syria.
This keynote address delivered by Gordon Duff was historic because for the very first time ever a Top Intel and Security Consultant publicly explained how the problem with ISIS/Daish was not terrorism but was Crime. He clarified that ISIS/Daish was a result of Criminal Behavior of an Israeli based International Crime Syndicate which essentially bought control over the US Congress during the last election.
Here is Gordon Duff’s keynote speech which was historical and is now sending shock-waves around the World.
YouTube – Veterans Today –
It should now be clear to everyone that the creation of ISIS/Daish occurred not because of Terrorism, but because of the undue influence exercised on the American Political system by this Israeli based Crime Syndicate in which a faction inside the American Congress, Military and Intel has been manipulated into supporting the creation of ISIS/Daish.
It is easy to imagine why Duff’s frank disclosure in his keynote address that the real problem on the ground in Iraq and Syria is Crime and the handy-work of an international Israeli Crime Cabal immediately changed the tone of the conference, and is now sending shock-waves around the World.
This is the first time ever that these issues have been clarified for the Syrian Security Services and Military as well as to Intel, Military and Diplomatic representatives from all over the World.
In days and weeks to follow it is expected that such an Historic disclosure based on hard Intel will change the scope and tone of the discussion about what is really going on in Iraq and Syria on the ground and how a worldwide criminal enterprise is behind it.
There were several sophisticated attempts to sidetrack and derail the VT Delegation and keep Gordon Duff from delivering his Historic Speech. Despite all these attempted interceptions, one of which was directly thwarted by VT Financial Editor Mike Harris, Gordon Duff was able to deliver his keynote address and make history by putting the actual facts behind ISIS/Daish on the public record for the very first time. Colonel Jim Hanke spoke at the Conference also and his talk was very well received.
Jim Dean took numerous films which should prove to be quite important when some are published on VT.
Mike Harris gave numerous interviews to the Syrian Press and met with Syrian Security Officials and the Grand Mulah. These discussions were very productive and did a great deal to further an understanding of what is actually behind the ISIS/Daish crime problem in Iraq and Syria which is nothing more than sophisticated international Organized Crime and must be dealt with as such.
Conclusion:
Obviously Gordon Duff and his team displayed great courage in attending this Conference in Damascus and deserve the highest commendations possible for this fine work representing the true interests of peace for folks with no voice.
When the dust settles time will show this speech will be a major turning point in the Criminal Cabal’s blatant abuse of the American People from their buying and hijacking of the US Congress and some American Generals with deep Intel connections and their abuse of millions around the World in many different nations, especially the Mideast.
No criminal Cabal or conspiracy this large can exist without utmost secrecy, which no longer exists thanks to Duff’s keynote address and complete disclosure. Their crimes are now no longer secret and the “Jig is now up”.

Thanks to Duff the Jig is about up for this International Israeli linked Crime Cabal, some have identified as the International Zionist Crime Cabal (IZCS) which has formed an alliance with the Bush Crime Cabal (BCC) which is now being completely identified all over the Worldwide Internet. It is now realized by many that the BCC was formed when Bush1 ran the Assassination of JFK and rose to power, able to deeply embed his operatives in the CIA, the Military, Congress, the Department of Justice and the Judiciary.
It is now beyond obvious that the only way to deal with a such a large Criminal Cabal is to indict them, arrest them, fully prosecute them, and if convicted with clearly convincing evidence beyond any shadow of a doubt, the sentence them appropriately. If they have committed Treason, Sedition or other Capital offenses well, then upon conviction in a suitable court of law, US or International, they must be executed like the convicted Nazis from the Nuremberg War trials or the convicted Japanese from the International Military Tribunal for the Far East also known as the “Tokyo Trials” and in other courts in many different places in Asia and the Pacific.
And worst of all, the ability of the Crime Cabal to use American Generals and a sitting US Senator to start up and run ISIS/ISIL/Daish for them is truly disgusting but there is actually even more to this story. Because the honest faction of the US Military is now targeting some ISIS positions, what we actually have now is a secret American Civil War being fought in Iraq. Unless John McCain is stopped in his rise to become Chairman of the Armed Service Committee, he may be able to exert serious pressure and be able to push America into another War in Iraq (maybe Syria, Iran and the Ukraine too) and his actions could trigger a nuclear WW3 with the Russian Federation and President Putin who has just about had enough. 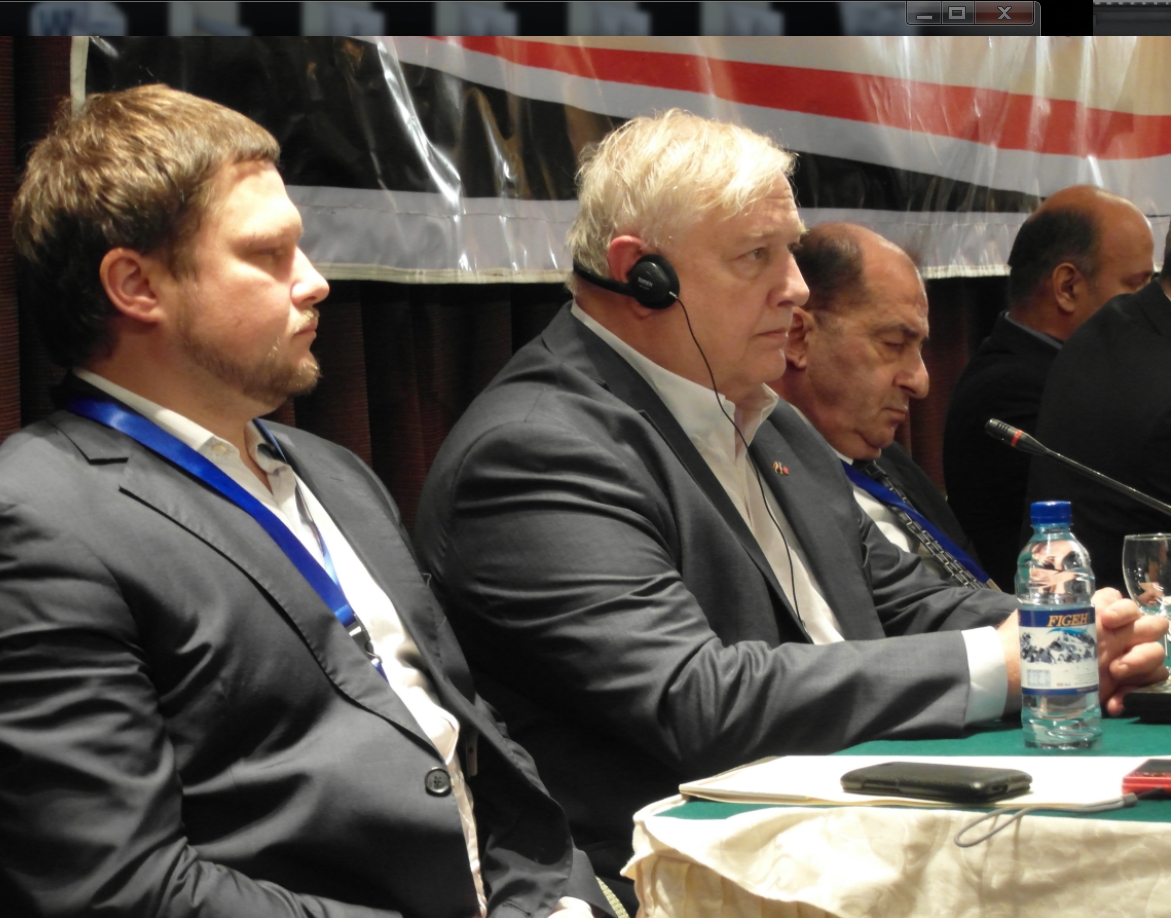 * Gordon Duff is the Managing Director and Senior Editor of veterans Today, a Marine combat veteran of the Vietnam War. He is a disabled veteran and has worked on veterans and POW issues for decades. He is an accredited diplomat and is generally accepted as one of the top global intelligence specialists. He manages the world’s largest private intelligence organization and regularly consults with governments challenged by security issues. Gordon Duff has traveled extensively, is published around the world and is a regular guest on TV and radio in numerous countries. Gordon Duff is a trained chef, wine enthusiast, avid motorcyclist and gunsmith specializing in historical weapons and restoration. His business experience and interests are in energy and defense technology. He is the Managing Director of Adamus Defense Group of Switzerland.
** Jim Dean is the Chairman of Veterans Today and wears many hats, ranging from day to day operations to the development, writing and editing of numerous articles. He also has an active schedule of international TV and radio interviews. He has numerous contacts on the ground in the Mideast and provides detailed reports in his articles and on Veterans Today News Reports Radio. Jim Dean is also a member of the Military Order of World Wars, Association for Intelligence Officers, and the Senior Vice President, Adamus Defense Group, Switzerland.
*** Colonel James Hanke is a Veterans Today Director and US Army Special Forces (Ret.) Colonel Hanke is Former G2 Third Army, NATO Nuclear Weapons Commander, Attache to Israel, A-Team Leader Vietnam, and a Director of Operations, Adamus Defense Group, Switzerland.
**** Mike Harris is the Financial Editor of Veterans Today,  a radio host, a former GOP Campaign Finance Chairman, gubernatorial candidate for Arizona,  and a Senior Vice President of Adamus Defense Group, Switzerland. Mike is an expert in full-contact mixed martial arts. His long term expertise in such has gained him a lot of respect and the nickname “Iron Mike”.
source »
Inside story of how the VT panel successfully entered into war-torn Syria for the conference…
[youtube=https://www.youtube.com/watch?v=PnyqLX5ycfQ]