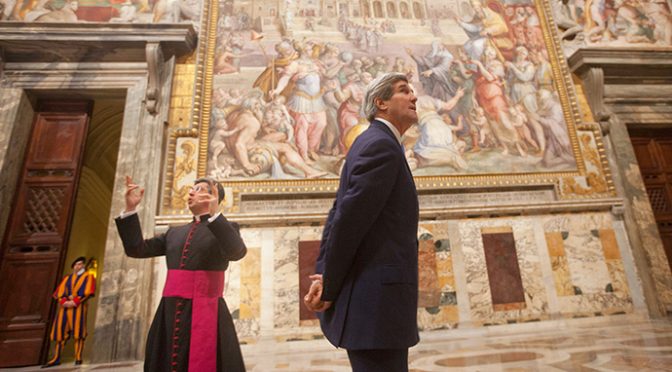 The Nazionists’ crimes, as proven partly in the recently released US Senate Torture report, were sanctioned by the Jesuit controlled Vatican. It is indeed prudent for these puppets to ask permission from their masters on what to do with the iconic prison amidst  mainstream awakening about its devious activities.
It’s too farfetched to say that Kerry’s visit to the Vatican has more to do with their status on the ongoing covert global purge of the Cabalists, rather than the “adequate humanitarian solutions” for inmates currently being held at Guantanamo. Other people’s welfare is too far from the skulls of those in the White House today.

President Barack Obama’s goal of closing the Guantanamo Bay prison complex in Cuba has met heavy resistance from lawmakers in Washington, and now the White House is turning to a higher authority for help: the Vatican.
During an hour-long meeting with Cardinal Pietro Parolin on Monday, Secretary of State John Kerry asked the Vatican to help the United States find “adequate humanitarian solutions” for inmates currently being held at Guantanamo. Pope Francis himself has stressed that all prisoners should be treated humanely and with dignity.
READ MORE: ‘Hidden death penalty:’ Pope Francis calls for end to life sentences
While the meeting covered various issues – including the Israeli-Palestinian peace process and the turmoil in the Middle East – Kerry noted that the US is still committed to closing Guantanamo.
“The US commitment to the closure of the Guantanamo Bay prison was also illustrated and the desire expressed for the Holy See’s assistance in seeking adequate humanitarian solutions for current inmates,” Vatican spokesperson Fr. Federico Lombardi told the Vatican Insider.
With more than 130 detainees still at Guantanamo, the US is perhaps hoping the Vatican’s many international connections could convince countries to change their minds and take detainees into their own facilities, the Vatican Insider reported. There has been no information regarding what the Vatican would do to help.
The US has been trying to transfer detainees from the prison for years, but has been hard-pressed to find countries willing to accept the terror suspects. Opened in 2002, the prison has held hundreds of suspects without trial. Some detainees have been held since the complex opened in the wake of the September 11 attacks in 2001.
However, American lawmakers have balked at White House requests to transfer detainees to prisons in the United States. The home countries of suspects have also resisted proposals to accept their return, leaving America with the option of finding so-called “third countries” that are willing to facilitate a transfer.
READ MORE: US sends 6 Guantanamo Bay detainees to Uruguay as ‘refugees’
Discussion regarding the humane treatment of prisoners has come to the forefront following the release of the Senate torture report, which details the brutal tactics deployed by the CIA against accused terror suspects.
Prison conditions have also been highlighted by Pope Francis, who called on people around the world to respect the dignity of all inmates. He condemned the use of torture and extraordinary rendition, which involves detaining individuals in one country and transferring them to prisons in another.
“These abuses will only stop if the international community firmly commits to recognizing…the principle of placing human dignity above all else,” he said at the time.
The pontiff went on to reiterate the Catholic Church’s opposition to capital punishment, as well as life sentences, which he termed “a hidden death penalty.”
“All Christians and men of good faith are therefore called upon today to fight, not only for the abolition of the death penalty – whether it is legal or illegal and in all its forms – but also to improve the conditions of incarceration to ensure that the human dignity of those deprived of their freedom is respected,” he said.
source »