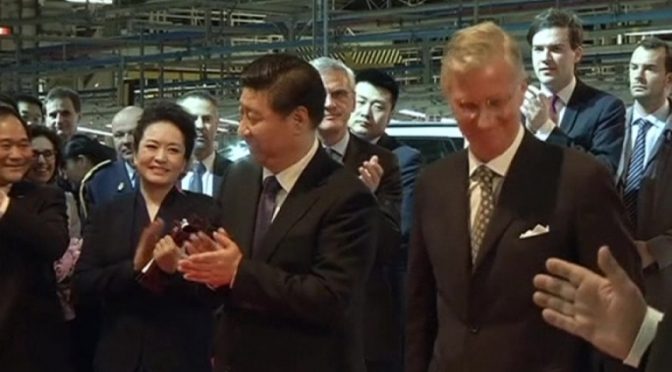 While China has been asserting its ownership of the major portion of the  Collateral Accounts, it’s not leaving everybody behind.
Last December 16th,
“At a meeting with the leaders of 16 Central and Eastern European countries (CEE) in the Serbian capital of Belgrade on Tuesday, Chinese Premier Li Keqiang announced a new investment fund of $3 billion to facilitate financing in the cash-strapped countries.”
However, this is not news for the mainstream media…

At a meeting with the leaders of 16 Central and Eastern European countries (CEE) in the Serbian capital of Belgrade on Tuesday, Chinese Premier Li Keqiang announced a new investment fund of $3 billion to facilitate financing in the cash-strapped countries.
“China will make the loan more preferential and reduce the cost of financing,” Li told the leaders on Tuesday.
Most of these countries are members of the European Union or have bid for membership of the EU.
Tuesday’s announcement came two years after Beijing had set up a $10 billion special credit line to support cooperative projects with CEE countries. Previous summits between China and CEE have been held at Budapest, Warsaw and Bucharest.
Beijing has grown to be an important source of capital for the central and east European countries now that investment and financing from Western Europe is getting harder to attain.
However, annual trade between China and the CEE countries is at a lowly 43 billion euros, unlike the strides Chinese trade has made with other emerging markets.
The Chinese Premier on Tuesday also announced that the second phase of the China-CEE Investment Cooperation Fund worth $1 billion will be launched soon.
The financing package is among the five-pronged proposals made by the Chinese premier to further enhance cooperation between China and CEE countries, which also include constructing a new corridor of inter-connectivity and expanding people-to-people exchanges.
“One year after the Bucharest action guideline was issued, China and CEE countries have witnessed closer exchanges and more active cooperation in various areas,” Li said.
At the second China-CEE leaders’ meeting in the Romanian capital of Bucharest last year, the two sides sketched out 38 cooperation projects.
China and these European nations must cooperate in producing equipment of high-speed railways, nuclear power and telecommunication as well as raw materials including steel, cement and plate glass, said Li.
“We will encourage Chinese enterprises to set up factories in CEE countries and actively participate in the construction of industrial parks there,” said Li.
Li said the two sides should develop interconnected land and sea channels between China and Europe by taking advantage of the railway between Hungary and Serbia and the Greek sea port of Piraeus, among others.
source »

China’s foreign exchange regulator expressed concerns over the recent devaluation of the Russian ruble on Thursday, but confirmed it was tracking the situation.
Chinese enterprises and financial institutions should use forward and swap facilities to avoid risks, said a senior official at the State Administration of Foreign Exchange, Wang Yungui, during a press conference in Beijing.
The ruble plummeted to a historic low two days ago before a moderate recovery that saw it stabilize at 100 rubles to 10.27 yuan (1.65 US dollars) on Thursday.
Wang noted that the situation had not affected transnational capital flow in China but the situation would continue to be assessed.
China and Russia, Wang said, were close trade partners and healthy bilateral trade was expected to continue.
“Under the circumstance, signs of capital outflows in certain months are normal. Overall, we still see net capital inflows,” he said.
China’s exports to Russia increased 10.5 per cent year on year and imports 2.9 per cent in the first three quarters of the year, with total trade volume valued at $70.78 billion.
The Russian Finance Ministry has begun selling its leftover currency reserves on the market, the ministry’s press office said Wednesday.
The amount that can be sold on the market is almost $7 billion, which “involves funds on the federal budget’s single account in Russian Federal Treasury,” according to the ministry.
The move is part of the government’s new measures taken on Tuesday to stabilize domestic foreign currency market and prop up the ruble.
Source: Agencies