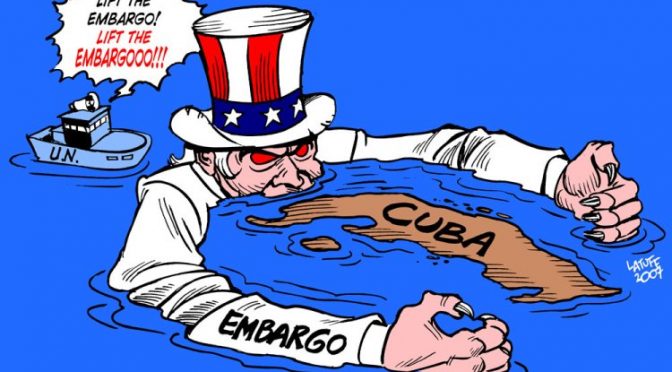 These may confirm Fulford’s hypothesis that Obama is now getting his orders from different handlers, to which the Vatican may have also given its nod to during Kerry’s visit to the Crown a few days ago.

This lifting of economic embargo against Cuba vindicated so many conspiracy theories on the Vatican, specifically the Jesuits’, control over governments around the world.
The elder Fidel Castro is a controlled opposition answerable only to the Jesuits. The current Pope Francis is, of course, a Jesuit.
On the other hand, the White House indecision over additional sanctions against Russia stems from the fact that although the Russian Ruble has spiraled downward it’s really not affecting the local economy due to the proactive measures Russia has done in recent years.
That’s the reason why Russia is not blinking but instead raised its Central Bank’s interest rates to 17%. Its national budget is denominated in depreciating Ruble, but its exports is invoiced in US Dollars, meaning the Russian economy is also gaining while the US dollar appreciates in the interim.
These grandmaster strokes are complemented by Russia’s energy supply contracts with China and the rest of Eurasia and South America.

Obama announces US will establish embassy in Cuba, lift sanctions

United States President Barack Obama said Wednesday that the US is initiating plans to rebuild its relationship with Cuba following decades of disputes between the two nations.
Speaking from the White House in Washington, DC, Pres. Obama said Wednesday that the US is seeking to establish diplomatic relations with Cuba and soon plans to open an embassy in Havana, authorize sales and exports between nations and make changes to current travel laws that for decades have restricted traffic between the two countries.
“Today, the United States of America is changing its relationship with the people of Cuba,” Obama said as he offered to “extend a hand of friendship” while unveiling what he called “the most significant changes in our policy in more than 50 years.”
“We will end an outdated approach that for decades has failed to advance our interest,” Obama said.
[soundcloud url=”https://api.soundcloud.com/tracks/181976177″]
Raúl Castro, the president of Cuba, announced in a statement televised concurrently with Obama’s that his nation will “reestablish diplomatic relations” with the US.

Since the administration of Pres. John F. Kennedy in the 1960s, restrictions and sanctions have kept the American and Cuban ways of life from all but converging policies put in place at the dawn of the Cold War in an attempt to curb the spread of Communism.
Yet Obama said Wednesday that, while rooted in the best of intentions, this “rigid policy” has “had little effect” a half-century later. Indeed, Obama acknowledged, a Castro still sits atop the Cuban government as during the Kennedy administration, and that similar restraints concerning how the US dealt with China and Vietnam, “once controversial,” have long been lifted following decades of disagreements.
“This is fundamentally about freedom and openness, and also expresses my belied in the power of people-to-people engagement,” Obama said of the policy change, adding that he intends such “contact will ultimately do more to empower the Cuban people.” READ MORE: USAID head resigns as US & Cuba plan ‘normalizing’ relations
John Kerry, the US secretary of state, will soon begin discussions with Cuban representatives, the White House said; in April an official from Havana will be welcomed to attend the annual Summit of Americas.
[soundcloud url=”https://api.soundcloud.com/tracks/181954761″]
The announcements on Wednesday occurred only hours after it was revealed that Alan Gross, an American citizen imprisoned in Cuba for the last five years, had been released on humanitarian grounds, along with a US intelligence official who has similarly been detained for 20 years. On its part, the US has released three individuals from the so-called “Cuban Five” who had until now been imprisoned. READ MORE: Obama to announce major Cuba policy change, US may open embassy
Announcements from the Obama and Castro offices came only hours after the head of the US Agency for International Development, or USAID, announced plans to resign following a five-year term marred in recent months by scandals surrounding American efforts to influence Cuban youths.
The Russian Foreign Ministry expressed hope that Washington might finally realize the ineffectiveness of sanction pressure on other countries, as it eventually did in the case of Cuba.
“It is indicative that the US president has recognized the futility of years of trying to ‘isolate’ Cuba. We cannot but hope that Washington will be quick to realize the futility of similar sanctions pressure on other countries,” the Russian Foreign Ministry said.
source »

Pope Francis has congratulated both the US and Cuba on restoring relations, as the Vatican together with Canada were confirmed to have played a significant role in the talks which broke 50 years of cold.
The Vatican said that it was a key player in negotiations between the two countries, “resulting in solutions acceptable to both parties.” Pope Francis added that he will continue to be supportive of the process. It emerged on Wednesday that he had sent a personal letter to both US President Barack Obama and President of Cuba Raul Castro during the summer.
Earlier in the day, a US Senator had mentioned both Vatican involvement and the letter, saying that it had provided “greater impetus and momentum for us to move forward.”
“Pope Francis sent letters to President Obama and to Cuban President Raul Castro this past summer urging a resolution of the matter of prisoners and progress in our bilateral relationship,” US Ambassador to the Vatican, Kenneth Hackett, confirmed to Reuters.
Additionally, the Vatican was responsible for playing host to meetings between Cuban and US officials.
Canada was a host to the secret talks, it turned out Wednesday. Canadian Prime Minister Stephen Harper revealed his country’s role in the negotiations and said that he stood behind a Cuba which acknowledged “the values of freedom, democracy, human rights and the rule of law.”
Cuba exchanged American citizen Alan Gross for three Cubans jailed in the United States on Wednesday. The prisoner swap is set to pave the way for a major overhaul of bilateral ties, potentially bringing an end to over five decades of severed diplomatic relations. Alan Gross, leaves following a press conference after being released by Cuba on December 17, 2014 in Washington,DC. (Reuters/Saul Loeb)

US officials said Gross was transported on a government plane in the morning after being released on humanitarian grounds, which followed a request from the White House. He arrived at Andrews Air Force base near Washington DC. Footage broadcast by MSNBC showed him exciting the aircraft, where he was met by well-wishers.
The three Cubans had been part of the so-called ‘Cuban Five.’ The group was allegedly sent by former Cuban President Fidel Castro to carry out espionage in South Florida. The men, who were convicted by a court in Miami in 2001 on charges including conspiracy and failure to register as foreign agents, are widely lauded back home.

‘Mutual interest for both nations’ – Castro

On Wednesday, Castro spoke to his own nation of the change in diplomatic relations welcoming the improvements in the relations with the US. However, he added that some differences exist between the two e.g. over questions of sovereignty human rights. Castro still said that the countries must live with their differences “in a civilized manner”.
READ MORE:Obama announces US will establish embassy in Cuba, lift sanctions
Castro reminded that the “economic, commercial, and financial blockade, which causes enormous human and economic damages to our country, must cease.”
The United States severed diplomatic relations with Cuba over 50 years ago due to the Castro’s socialist reforms and increased cooperation with the Soviet Union. Along with the severed ties, Washington also imposed a commercial, economic and financial embargo against Cuba in 1960. That embargo was soon expanded to include all imports to the small Caribbean island.
“I look forward to engaging Congress in an honest debate on lifting this embargo,” President Barack Obama said.
source »

S President Barack Obama has already signed a bill opening the way for more economic sanctions against Russia, according to a State Department spokesperson. A White House representative however said the bill is not yet signed.
The bill was expected to be signed “by the end of the week” despite some concerns about its contents, according to White House press secretary Josh Earnest’s statement in Tuesday. But the bill was apparently signed without any further delay, as confirmed by US State Department spokesperson Jen Psaki.
“He signed it yesterday,” she stated on Wednesday when asked about the bill dubbed Ukraine Freedom Support Act of 2014.
However, according to representatives of the White House “the President has not yet signed this legislation,”Ria and TASS news agencies report.

The bill will see some $350 million in assistance provided to Ukraine.
Besides the military and non-military assistance to Ukraine, the bill additionally allows further imposition of conditional sanctions on the Russian defense sector, such as penalties on state-owned arms dealer Rosoboronexport as well as connected individuals.
The bill also envisions $20 million in annual funding in order to support “Russian democracy and civil society organizations” including through increasing “US government-supported broadcasting activities.”Another priority is expanded broadcasting in countries of the former Soviet Union, which will cost another $10 million per year.
Although the bill does not make sanctions fully obligatory, it allows Obama to decide which parts of the bill to enforce.

The news comes the very same day President Obama made a historic announcement about a “policy change” towards Havana and US plans to lift the sales and exports embargo and establish diplomatic relations with Cuba.
READ MORE: Obama announces US will establish embassy in Cuba, lift sanctions
The decades of “outdated approach” brought no regime change in Cuba which is “still governed by the Castros and the Communist party,” the US president announced.
“No other nation joins us in these sanctions. And it has had little effect,” Obama said. “We will end an outdated approach that for decades has failed to advance our interest.”
In the case of Russia, US politicians including Obama have also admitted that restrictions imposed so far were not as effective as expected. However, “every country is hugely different,” Psaki said, apparently implying that the push for “isolation” of Russia may still somehow influence policies and processes within the country.
The Russian Foreign Ministry meanwhile expressed hope that Washington might finally realize the ineffectiveness of sanction pressure on other countries, as it eventually did in the case of Cuba.
“It is indicative that the US president has recognized the futility of years of trying to ‘isolate’ Cuba,” the Russian Foreign Ministry said. “We cannot but hope that Washington will be quick to realize the futility of similar sanctions pressure on other countries.”
source »