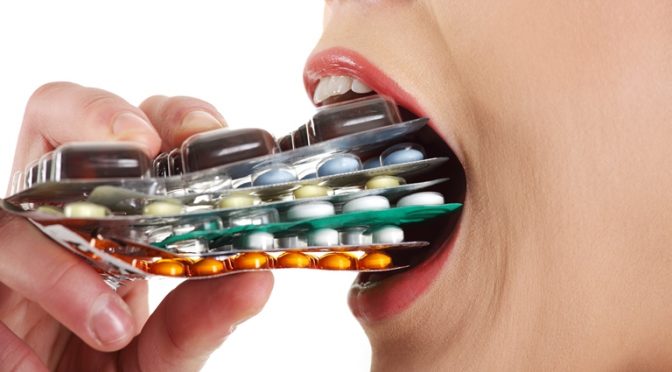 Whether by sheer coincidence or otherwise, we received from Lancet the article below a few hours after we posted this article on our healthcare website. So, we figured at least two things could happen in the near future. Either the mainstream healthcare system will adapt to the non-chemical, non-invasive interventions, or just let fear envelopes the entire population and go on with their Agenda21 — global depopulation scenario.

“If we fail to act, we are looking at an almost unthinkable scenario where antibiotics no longer work and we are cast back into the dark ages of medicine” – Rt Hon David Cameron MP

However, if we base our hypothesis on the peaceful geopolitical transition, e.g. lifting of sanctions against Cuba, then maybe we are now starting to witness a gradual transition to a truly scientific-based healthcare institution as opposed to the current medieval chemical-based treatments, falsely labeled as Modern Medicine. Drug resistance has been there since we started using antibiotics. Doctors perpetually require us to complete the 7-day antimicrobial drug-based protocol, otherwise, the infection could get resistive, and the same drug wouldn’t be as “effective”. So, why suddenly acknowledging this now?

Last week brought renewed interest in the worldwide antimicrobial resistance crisis, which has a potentially devastating effect on human beings, livestock, and the global economy. This interest was stimulated by the publication on Dec 11, 2014, of Antimicrobial Resistance: Tackling a Crisis for the Health and Wealth of Nations, from the Review of Antimicrobial Resistance, led by economist Jim O’Neill and informed by two reports prepared by consultants KPMG and RAND Europe; and by the first annual progress and implementation report on antimicrobial resistance by the UK Government, following their 2013 5-year strategy plan.

“Drug-resistant infections already kill hundreds of thousands a year globally, and by 2050 that figure could be more than 10 million. The economic cost will also be significant, with the world economy being hit by up to $100 trillion by 2050 if we do not take action.”

The O’Neill review estimates that 300 million people will die as a result of drug resistance during the next 35 years. This would have a catastrophic knock on effect on the world’s economy, reducing global GDP by 2–3·5% more than it should otherwise have been in 2050. In addition to antibiotic resistance, the review projects figures for resistance to antimalarial, HIV, and tuberculosis drugs. However, the consultants admit the data are unreliable, and state that: “These were considered as proxies in the absence of better data or forecasting tools; much more details and robust work will no doubt be done by academic researchers and clinicians in the future”. The authors also state that their: “teams experienced significant problems with data collection because of the lack of consistent sources monitoring the number of bacterial infections globally”. As such, reliance on the accuracy of these figures should be treated cautiously. The RAND Europe report has been peer reviewed according to their internal quality assurance procedures, but independent peer review and publication in the scientific literature would be necessary for their conclusions to be taken as anything other than preliminary and provisional. An opportunity has been missed in not publishing these papers in scientific journals concurrently with the final O’Neill report.

The government report centres around recommendations for seven areas, with key achievements and action points of the first year’s progress outlined. Of these, the strengthening of international collaboration will underlie the eventual successful tackling of antimicrobial resistance. Much progress on international collaboration is already being made, in particular through the Transatlantic Task Force on Antimicrobial Resistance. In international circles, the UK is presenting a unified approach from the Chief Medical Officer and the Chief Veterinary Officer, and together with bodies such as WHO, the UN Food and Agriculture Organization, and the World Economic Forum, a steering committee is aiming to put antimicrobial resistance on the international agenda, and to raise interest and support for reducing the use of antimicrobial drugs at all levels of society from local through to global.

Publication of these papers has been followed by a high-level One Health Colloquium (Dec 18–19 in London UK), which will lead to practical recommendations. The One Health group recognises that there is a shared outcome of health for all and fosters cross-disciplinary cooperation at the intersection between human and animal ecosystems. This meeting has the potential to be more influential and effective than the government report in achieving tangible goals, and in creating the necessary mechanisms for international collaboration. The timing is fortuitous in that high-level leaders and scientists from human and animal health sectors, industry representatives, and government and international bodies, including the World Bank and WHO, are in a position to identify the data and evidence needed to recommend actions that will properly address contentious issues, such as industry cost-effectiveness. Two underlying themes to the One Health meeting agenda exist: first, that the antimicrobial resistance crisis must not become a blame game—human beings and animals occupy the same ecosystems; and second, that there needs to be an understanding of the economics and mathematics involved: industry voices will be heard and understanding the potential economic impact is a necessity.

In 2013, The Lancet Infectious Diseases Commission on antibiotic resistance called for coordinated action, politically, nationally, and internationally. The next milestone is a Global Action Plan due to be ratified at the World Health Assembly in May, 2015, and the push for the inclusion of antimicrobial resistance as a post-2015 sustainable development goal. The first phase of work outlined in last week’s reports might not be as scientifically rigorous or informed by evidence as one might hope, and there now needs to be further and better engagement by scientists to sharpen the data and the message. The One Health meeting and the follow-up report with recommended actions should help this to materialise.

Responding to mounting international concern about the rise of drug-resistant infections, the UK Prime Minister, The Rt Hon David Cameron MP, commissioned Jim O’Neill in July 2014 to chair this review on antimicrobial resistance. By the summer of 2016, the Review will recommend a package of actions that we think should be agreed internationally to tackle this growing threat. The Review operates independently of the UK Government and the Wellcome Trust who are co-funding and hosting us at their headquarters in London.

“If we fail to act, we are looking at an almost unthinkable scenario where antibiotics no longer work and we are cast back into the dark ages of medicine” – Rt Hon David Cameron MP

Antimicrobial resistance (AMR) is a global and complex issue which cannot be solved by any one country acting in isolation. We approach our goals with a blank sheet of paper and open minds. We want to hear from innovative minds across all countries and disciplines. In developing our recommendations, we will consider the economic priorities of all parts of the world inclusively and consult with a range of interested organisations and governments. December 11, 2014 The Review on Antimicrobial Resistance publishes its first paper The Review has published its first paper, Antimicrobial Resistance: Tackling a Crisis for the Health and Wealth of Nations on December 11 at a launch event hosted by its Chair, Jim O’Neill, in London. In this report we explain why failing to tackle drug-resistant infections will cause 10 million deaths a year and cost up to US$ 100 trillion by 2050. Jim O’Neill, Chairman of the Review on AMR, said:

“Drug-resistant infections already kill hundreds of thousands a year globally, and by 2050 that figure could be more than 10 million. The economic cost will also be significant, with the world economy being hit by up to $100 trillion by 2050 if we do not take action.”

Reacting to this report, Nick Stern, President of the British Academy, IG Patel Professor of Economics and Government at the LSE and former Chief Economist of the World Bank, said:

“Wise policy looks ahead and tries to manage risks, particularly the big ones. There can be no doubt now that antimicrobial resistance is one of the biggest that we, all of us, face. The work of the group led by Jim O’Neill is of profound importance and this paper shows very convincingly the great scale of the risks, in terms of human lives and the economy, that are posed by this deeply worrying phenomenon.”

Image credit: Derren Ready, Wellcome Images source » Why wait for the institution to change their practices? Non-drug treatments are already here.! And it’s easier, safer and cheaper than you think…