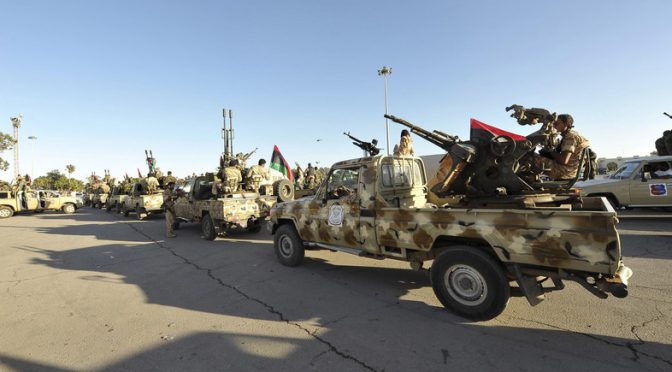 Adam Smith gave the Dreadful Few the economic leverage to manipulate the market and corrupt the economic order of the West and arguably much of the World.

Goldman Sachs in Libya–Another Racket by the Dreadful Few

From tech stocks to high gas prices, Goldman Sachs has engineered every major market manipulation since the Great Depression — and they’re about to do it again.” Matt Taibi[1]

Libyan officials should have read Greg Smith’s or Matt Taibbi’s accounts of Goldman Sachs. Or at least they should have been aware that the Dreadful Few relentlessly and almost universally manipulate the market for their own ends.[2]
Jack Blum, a Jewish attorney and former Senate investigator “who headed a major bribery investigation against Lockheed in the 1970s that led to the passage of the Foreign Corrupt Practice Act,” declared that companies like Goldman Sachs “violated every fucking law in the book.”[3]
Writing in the Huffington Post in 2010, Blum declared,
“Over forty years ago, working for the Senate Antitrust Subcommittee, I investigated mortgage fraud in several large American cities including New York and Boston.
“The fraud involved falsified appraisals, unqualified buyers, ‘flipping’ of properties, and in some cases purchases by non-existent buyers. One of the institutions involved in the New York situation was Citibank–a bank that provided warehouse loans to the mortgage companies involved in the fraud.
“Needless to say, the same bank and some of the same people have been involved in each of the succeeding cycles of fraud. And, each time the bank has had a squad of lobbyists and ‘independent experts’ selling the idea that continued unregulated mortgage lending was a good idea.”[4]
It gets worse: some of those banks, said journalist Matt Taibbi, “moved money for organizations linked to Al Qaeda and Hezbollah, and for Russian gangsters…”[5]

“In these new, even scarier kinds of manipulations, banks that own whole chains of physical business interests have been caught rigging prices in those industries.
“For instance, in just the past two years, fines in excess of $400 million have been levied against both JPMorgan Chase and Barclays for allegedly manipulating the delivery of electricity in several states, including California.

“In the case of Barclays, which is contesting the fine, regulators claim prices were manipulated to help the bank win financial bets it had made on those same energy markets…
“And last summer, The New York Times described how Goldman Sachs was caught systematically delaying the delivery of metals out of a network of warehouses it owned in order to jack up rents and artificially boost prices….
“You might not have been surprised that Goldman got caught scamming the world again, but it was certainly news to a lot of people that an investment bank with no industrial expertise, just five years removed from a federal bailout, stores and controls enough of America’s aluminum supply to affect world prices…
“Today, banks like Morgan Stanley, JPMorgan Chase and Goldman Sachs own oil tankers, run airports and control huge quantities of coal, natural gas, heating oil, electric power and precious metals.
“They likewise can now be found exerting direct control over the supply of a whole galaxy of raw materials crucial to world industry and to society in general, including everything from food products to metals like zinc, copper, tin, nickel and, most infamously thanks to a recent high-profile scandal, aluminum. And they’re doing it not just here but abroad as well:
“In Denmark, thousands took to the streets in protest in recent weeks, vampire-squid banners in hand, when news came out that Goldman Sachs was about to buy a 19 percent stake in Dong Energy, a national electric provider.
“The furor inspired mass resignations of ministers from the government’s ruling coalition, as the Danish public wondered how an American investment bank could possibly hold so much influence over the state energy grid.”[6]

Indeed, Libyan officials could have learned a lot more about this black operation if they just cared enough to study the history of the Federal Reserve, which was forged in 1913.[7]
[youtube https://www.youtube.com/watch?v=mXmNpdYpfnk?feature=oembed]
[youtube https://www.youtube.com/watch?v=6HYq6kdseV8?feature=oembed]
If Libyan officials did even a casual study on the Fed, they would have quickly learned that the Fed has a history of suppressing the vast majority of Americans. Why?
Because the Fed turned out to be a large Vampire Squid that never ceases to suck the economic sweat and blood of the Goyim. In fact, nine trillion dollars were missing from the Fed and no one “knew” where that money went!
[youtube https://www.youtube.com/watch?v=s5zy7YkuMJ8?feature=oembed]

If you think all this is an exaggeration, here is again the assessment of Greg Smith, a Jew who worked for Goldman Sachs as vice president for twelve years but became disillusioned with their covert activities.
Smith declared explicitly that Goldman Sachs wants to persuade you, the client,

“to invest in the stocks or other products that we are trying to get rid of because they are not seen as having a lot of potential profit…
“Get your clients—some of whom are sophisticated, and some of whom aren’t—to trade whatever will bring the biggest profit to Goldman. Call me old-fashioned, but I don’t like selling my clients a product that is wrong for them.
“I attend derivative sales meetings where not one single minute is spent asking questions about how we can help clients. It’s purely about how we can make the most possible money off of them.
“If you were an alien from Mars and sat in on one of these meetings, you would believe that a client’s success or progress was not part of the thought process at all.
“It makes me ill how callously people talk about ripping their clients off. Over the last 12 months I have seen five different managing directors refer to their own clients as ‘muppets,’ sometimes over internal e-mail.”[8]

Milton Friedman implicitly proved that Smith was right. Listen to him very carefully here and see how he indirectly applied an essentially Talmudic principle to a crowd of students:
[youtube https://www.youtube.com/watch?v=-_gU50mfehI?feature=oembed]

But since those who do not know their history are doomed to repeat it, and since Libya was bequeathed into the able hands of the Dreadful Few right after the fall of Gaddafi, the country was doomed to fail.
[youtube https://www.youtube.com/watch?v=6O8vM0-6EEE?feature=oembed]
[youtube https://www.youtube.com/watch?v=Iw5Ij_RFJ1Q?feature=oembed]
Now listen to this:

“The Libyan Investment Authority, a government-managed sovereign wealth fund, is suing Goldman Sachs for $1 billion and claims that the bank ‘took them for a complete ride,’ according to a report by the Financial Times.
“In the lawsuit, LIA claims that Goldman exploited the fund and ‘encouraged’ it to pursue 9 extremely risky and ultimately unsuccessful investments worth over $1 billion in 2008… But by 2011, these trades were ‘worthless.’
“The LIA claims that Goldman took advantage of the LIA’s (allegedly) financially illiterate staff in order to make money, and that Goldman seduced its staff with fancy gifts and — for lack of a more politically correct term — bribes.
“The LIA claims that they ‘completely trusted Goldman’ and believed that its former head of north Africa, Youssef Kabbaj was ‘their very close friend.’”[9]

Libya should have known better. And if the Libyan people need more evidence, they need to look at how the Dreadful Few, through the Fed and perpetual wars in the Middle East, continue to wreck the economic stability of the United States and feast on the sweat of the average American. Again, the historical evidence for this is quite simple.
For example, if the government needs one million dollars, the Fed will print that amount and loan it out with interest, which then puts the government into more debt because there is no mathematical way to pay that one million dollars plus interest, since the economy does not grow that fast:
[youtube https://www.youtube.com/watch?v=1_uLwHFR2aA?feature=oembed]
In order for that usurious contract to take place, excessive taxes have to be placed on the common man; when that happens, the common man suffers and becomes poorer while the rich becomes richer.
And when the rich and powerful literally screwed up the economy—as in the case of Wall Street—the government bailed them out. And get this: the rich and the powerful got a raise for screwing up the economy!

“[T]he men who ran Lehman Brothers, or the unit of AIG that sank that company, each walked away with hundreds of millions, rich forever. Angelo Mozilo pulled $132 million out of Countrywide in 2008 alone, even as all the rotten subprime loans he’d written over the years were collapsing and his company was losing $704 million that year.”[10]

Remember Jamie Damon of JPMorgan Chase got “a whopping 74 percent raise”?[11] Once the economy is wrecked, the company had to lay off 7,500 employees and freeze “salaries for the non-CEO class of line employees.”[12]
It got worse: the government took your precious retirement money and bailed those monsters out.[13]
Adam Smith, who even allowed usurious contracts, knew very well that this would happen. He admitted,

“The trouble with paper money is that it rewards the minority [the oligarchs] that can manipulate money and makes fools of the generation [the common man] that has worked and saved.”[14]

Smith had his chance to repudiate the theoretical and practical implications of usury in his Wealth of Nations, but instead he opened the door for all sorts of corruption when he allowed and even accepted usury.[15]
In that sense, Smith, as the father of modern economics, parted company with the Western tradition with respect to condemning usury in all its forms, and opened the door for those who wanted to build an earthly kingdom in opposition to what the Western tradition has stood for.
In short, Smith gave the Dreadful Few, most specifically Milton Friedman, the intellectual leverage to manipulate the market and corrupt the economic order of the West and arguably much of the World. There is indeed a solution (Sicut Judaeis non), but people have not gotten enough courage to carry it out.
[youtube https://www.youtube.com/watch?v=KNWPYQjXSYA?feature=oembed]

Jonas E. Alexis studied mathematics and philosophy as an undergraduate at Palm Beach Atlantic University and has a master’s degree in education from Grand Canyon University.
source »

3 thoughts on “Goldman Sachs in Libya”