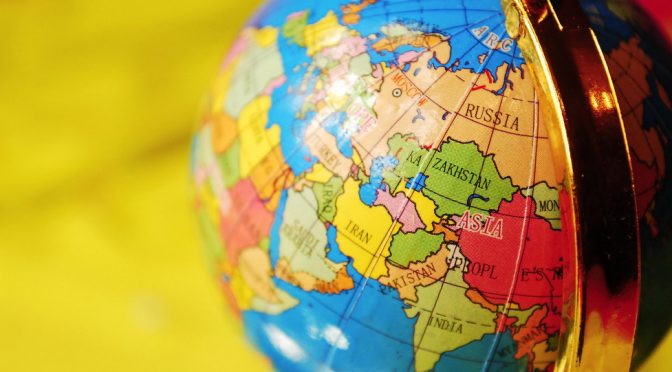 Upcoming 2015 year will be all about further moves towards the integration of Eurasia as the US is progressively squeezed out of Eurasia, Pepe Escobar believes.

BEIJING, December 31 (Sputnik) — Fasten your seatbelts; 2015 will be a whirlwind pitting China, Russia and Iran against what I have described as the Empire of Chaos. So yes – it will be all about further moves towards the integration of Eurasia as the US is progressively squeezed out of Eurasia. We will see a complex geostrategic interplay progressively undermining the hegemony of the US dollar as a reserve currency and, most of all, the petrodollar.For all the immense challenges the Chinese face, all over Beijing it’s easy to detect unmistakable signs of a self-assured, self-confident, fully emerged commercial superpower. President Xi Jinping and the current leadership will keep investing heavily in the urbanization drive and the fight against corruption, including at the highest levels of the Chinese Communist Party (CCP). Internationally, the Chinese will accelerate their overwhelming push for new ‘Silk Roads’ – both overland and maritime – which will underpin the long-term Chinese master strategy of unifying Eurasia with trade and commerce.
Global oil prices are bound to remain low. All bets are off on whether a nuclear deal will be reached by this summer between Iran and the P5+1. If sanctions (actually economic war) against Iran remain and continue to seriously hurt its economy, Tehran’s reaction will be firm, and will include even more integration with Asia, not the West.

No matter how it was engineered, the fact that stands is that the current financial/strategic oil price collapse is a direct attack against (who else?) Iran and Russia.

Washington is well-aware that a comprehensive deal with Iran cannot be reached without Russia’s help. That would be the Obama administration’s sole – and I repeat – sole foreign policy success. A return to the “Bomb Iran” hysteria would only suit the proverbial usual (neo-con) suspects. Still, by no accident, both Iran and Russia are now subject to Western sanctions. No matter how it was engineered, the fact that stands is that the current financial/strategic oil price collapse is a direct attack against (who else?) Iran and Russia.
That derivative war Now let’s take a look at Russian fundamentals. Russia’s government debt totals only 13.4% of its GDP. Its budget deficit in relation to GDP is only 0.5%.  If we assume a US GDP of $16.8 trillion (the figure for 2013), the US budget deficit totals 4% of GDP, versus 0.5% for Russia. The Fed is essentially a private corporation owned by regional US private banks, although it passes itself off as a state institution. US publicly held debt is equal to a whopping 74% of GDP in fiscal year 2014. Russia’s is only 13.4%.The declaration of economic war by the US and EU on Russia – via the run on the ruble and the oil derivative attack – was essentially a derivatives racket. Derivatives – in theory – may be multiplied to infinity. Derivative operators attacked both the ruble and oil prices in order to destroy the Russian economy. The problem is, the Russian economy is more soundly financed than America’s.
Considering that this swift move was conceived as a checkmate, Moscow’s defensive strategy was not that bad. On the key energy front, the problem remains the West’s – not Russia’s. If the EU does not buy what Gazprom has to offer, it will collapse.
Moscow’s key mistake was to allow Russia’s domestic industry to be financed by external, dollar-denominated debt. Talk about a monster debt trap  which can be easily manipulated by the West. The first step for Moscow should be to closely supervise its banks. Russian companies should borrow domestically and move to sell their assets abroad. Moscow should also consider implementing a system of currency controls so the basic interest rate can be brought down quickly.
And don’t forget that Russia can always deploy a moratorium on debt and interest, affecting over $600 billion. That would shake the entire world’s banking system to the core. Talk about an undisguised “message” forcing the US/EU economic warfare to dissolve.

And don’t forget that Russia can always deploy a moratorium on debt and interest, affecting over $600 billion.

Russia does not need to import any raw materials. Russia can easily reverse-engineer virtually any imported technology if it needs to. Most of all, Russia can generate — from the sale of raw materials – enough credit in US dollars or euros. Russia’s sale of its energy wealth — or sophisticated military gear — may decline. However, they will bring in the same amount of rubles — as the ruble has also declined.
Replacing imports with domestic Russian manufacturing makes total sense. There will be an inevitable “adjustment” phase – but that won’t take long. German car manufacturers, for instance, can no longer sell their cars in Russia due to the ruble’s decline. This means they will have to relocate their factories to Russia. If they don’t, Asia – from South Korea to China — will blow them out of the market.
Bear and dragon on the prowl

The EU’s declaration of economic war against Russia makes no sense whatsoever. Russia controls, directly or indirectly, most of the oil and natural gas between Russia and China: roughly 25% of the world’s supply. The Middle East is bound to remain a mess. Africa is unstable. The EU is doing everything it can to cut itself off from its most stable supply of hydrocarbons, prompting Moscow to redirect energy to China and the rest of Asia. What a gift for Beijing – as it minimizes the alarm about the US Navy playing with “containment” across the high seas.Still, an unspoken axiom in Beijing is that the Chinese remain extremely worried about an Empire of Chaos losing more and more control, and dictating the stormy terms of the relationship between the EU and Russia. The bottom line is that Beijing would never allow itself to be in a position where the US could interfere with China’s energy imports – as was the case with Japan in July 1941 when the US declared war by imposing an oil embargo, cutting off 92% of Japanese oil imports.
Everyone knows a key plank of China’s spectacular surge in industrial power was the requirement for manufacturers to produce in China. If Russia did the same, its economy would be growing at a rate of over 5% per year in no time. It could grow even more if bank credit was tied only to productive investment.
Now imagine Russia and China jointly investing in a new gold, oil and natural resource-backed monetary union as a crucial alternative to the failed debt “democracy” model pushed by the Masters of the Universe on Wall Street, the Western central bank cartel, and neoliberal politicians. They would be showing the Global South that financing prosperity and improved standards of living by saddling future generations with debt was never meant to work in the first place.
Until then, a storm will be threatening our very lives – today and tomorrow. The Masters of the Universe/Washington combo won’t give up their strategy to make Russia a pariah state cut off from trade, the transfer of funds, banking and Western credit markets and thus prone to regime change.
Further on down the road, if all goes according to plan, their target will be (who else) China. And Beijing knows it. Meanwhile, expect a few bombshells to shake the EU to its foundations. Time may be running out – but for the EU, not Russia. Still, the overall trend won’t be altered; the Empire of Chaos is slowly but surely being squeezed out of Eurasia.
The views expressed in this article are solely those of the author and do not reflect the official position of Sputnik.
You can buy Pepe Escobar’s latest book “Empire of Chaos” here
Follow him on Facebook
source »