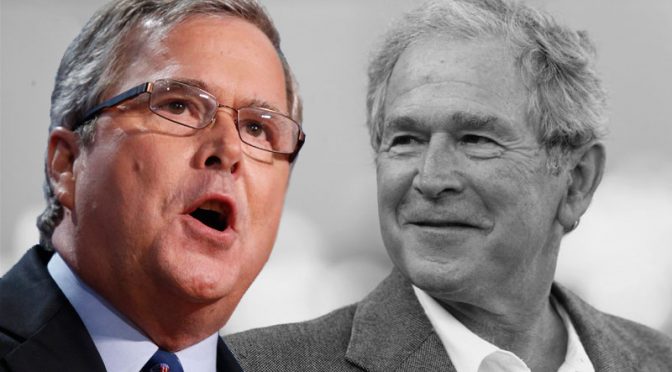 by Gordon Duff on January 1, 2015
The Hillary haters; who are they? Who do they work for and why are they so silent about their love of scumbucket Jeb Bush?
The worst possible thing that could happen to this planet is for Jeb Bush to end up in the White House.  We have more than significant evidence that the upcoming election is already over.  Florida, Ohio, Virginia, Wisconsin, Michigan and New Mexico have voting systems in place with “hacks” at the ready, all to put Bush in the White House.

The result will be an expanded medium intensity war across Africa and Central Asia, a collapse of the US economy, $5 dollar gasoline, runaway health care prices and a new “dark age” with secret societies and the cabal in Tel Aviv ruling America.
False flag terror attacks are already planned to take the US power grid down for 36 months while a total police state is instituted.  We have identified the planners, seen the studies done “defensively” that are really the plan of action and know of 25 nuclear weapons configured for EMP.

But then, everyone knows this. Many have been partially exposed to Jeb’s background, his ties to cartel banking.  Few know much of the real history of the Bush family.  Jeb’s uncle Prescott, not the grandfather but the uncle, ran the family in secret.
He was the greatest arms dealer in the world, building the Chinese was his life’s ambition.  The real partners of the Bush family are the Chinese, who have been given everything while blaming others has been the job for stooges, the press, so many around us.
Ask yourself this, if we all know Bush will end America as we know it, as his brother did in 2001, finishing us off forever, why then are so many attacking Hillary and totally oblivious to the real threat?
Let’s talk about CIA briefers for a moment.  We have among us one or two claiming to be CIA presidential briefers during the Reagan/Bush/Clinton/Bush2 era.  At that time, CIA briefings were typically unvetted trash from the Mossad, imaginary WMD’s, invented Al Qaeda, a fantasy any child could debunk.
While the CIA ran a trillion dollars in heroin and cocaine, oversaw the theft of hundreds of nuclear weapons, participated in numerous acts of false flag terrorism and lied to the president and congress continually, our “briefers,” now among us using their CIA “bully pulpit” aren’t taking credit or blame for the years they were the purveyor of the lies, the ones who covered up the nuke thefts, the chemical warfare programs, the assassinations, the secret prisons and the stolen trillions of dollars.
A “senior CIA analyst” would know it all, I have some experience with such things.  When do we hear it, “Yes, I lied every day, pushed America into war but I was a coward and afraid of losing my job and pension.”
Maybe the real answer is much worse and probably is.  Just a thought.

Back to Hillary.  I have been subjected for years to stories of Hillary killing Vince Foster with a garrote or her and Bill’s roles running the drug trade from 1980 on.
One problem here, they weren’t “anyone” then and only moved into the White House in 1993 yet the internet continually blames them for Iran Contra or stories about Mena Airport and their role in running the world.
Problem is, when you check the background of the witnesses, you find them all to be convicted felons acting as FBI informants or working directly for the now dead Richard Mellon Scaife, Karl Rove or Jerry Falwell.  Should we add “the Zionists” to this very obvious list?
There was a reason Hillary spoke of a “great conspiracy” and that the Mossad sent Monica after Bill.  He was actually doing the job, paying off the national debt and establishing a basis for the demise of the Federal Reserve System.  Gore would have taken it down as, without deficits, there is no reason to keep the Fed alive.

Remember Clinton?  There was no DHS, we had cheap gas, a rising standard of living for the last time, recovering from the Reagan “trickle down” that left 35% of America with minimum wage jobs and collapsed our manufacturing economy along with our educational base and technology sector.

138 of Reagan’s top cabinet members and advisors were convicted in Iran Contra and we had a president who claimed on the witness stand that he didn’t remember ever being president.  This is a partial list from Wikipedia:

“By the end of his term, 138 Reagan administration officials had been convicted, had been indicted, or had been the subject of official investigations for official misconduct and/or criminal violations. In terms of number of officials involved, the record of his administration was the worst ever.”
1. Lyn Nofziger–White House Press Secretary – Convicted on charges of illegal lobbying of White House in Wedtech scandal.
2. Michael Deaver, Reagan’s Chief of Staff,  received three years’ probation and was fined one hundred thousand dollars after being convicted for lying to a congressional subcommittee and a federal grand jury about his lobbying activities after leaving the White House. Same as with Lyn Nofziger.
3. James Watt, Reagan’s Secretary of the Interior was indicted on 41 felony counts for using connections at the Department of Housing and Urban Development to help his private clients seek federal funds for housing projects in Maryland, New Jersey, Massachusetts, Puerto Rico and the Virgin Islands. Watt conceded that he had received $500,000 from clients who were granted very favorable housing contracts after he had intervened on their behalf. Watt was eventually sentenced to five years in prison and 500 hours of community service.
4. John Poindexter, Reagan’s national security advisor, guilty of five criminal counts involving conspiracy to mislead Congress, obstructing congressional inquiries, lying to lawmakers, used “high national security” to mask deceit and wrong-doing…
5. Richard Secord pleaded guilty to a felony charge of lying to Congress over Iran-Contra. Appointed by William Casey to assist Oliver North.
6.  Elliott Abrams was appointed by President Reagan in 1985 to head the State Department’s Latin American Bureau. He was closely linked with ex-White House aide Lt. Col. Oliver North’s covert movement to aid the Contras. Working for North, Abrams coordinated inter-agency support for the contras and helped solicit illegal funding from foreign powers as well as domestic contributors. Abrams agreed to cooperate with Iran-Contra investigators and pled guilty to two charges reduced to misdemeanors. He was sentenced in 1991 to two years probation and 100 hours of community service but was pardoned by President George Bush…
7. Robert C. McFarlane, Reagan’s National Security Advisor, pled guilty to four misdemeanors and was sentenced to two years probation and 200 hours of community service. He was also fined $20,000. He received a blanket pardon from President George Bush…
8. Alan D. Fiers was the Chief of the Central Intelligence Agency’s Central American Task Force. Fiers pled guilty in 1991 to two counts of withholding information from congress about Oliver North’s activities and the diversion of Iran arms sale money to aid the Contras. He was sentenced to one year of probation and 100 hours of community service. Alan Fiers received a blanket pardon for his crimes from President Bush…

What is clear to anyone is that, from a standpoint of corruption or proven criminal complicity, the only “crew” that comes close to this is the Nixon gang.  They sent a Vice President and Attorney General to prison and a President who was pardoned.  The entire “Committee to Re-Elect the President” was convicted along with the White House “Plumbers.”  They only two not convicted were Henry Kissinger, Secretary of State and Chief of Staff George H.W. Bush.
Imagine those two getting off while others went to jail?
Then we look at Bush 2.  Please tell me the entire administration doesn’t belong in prison for false flag terrorism, looting the economy, war crimes and treason?
This is what brings me down to Hillary Clinton.  I just got off the phone with Stew Webb.  I don’t care if Larry Nichols says Clinton wants 200 people murdered.  Hell, I will do it myself if she asks.  What she won’t do is collapse the economy, screw veterans, start a world war, empower more Israeli run bureaucracies like Homeland Security or give what few military secrets we have to China, what, as we have pointed out so many times, is the real purpose of the Bush family through Prescott Bush and Company, the front for the Chinese Army and George H.W. Bush, former Ambassador to China and CIA Director.
Why are they doing this?  I have some ideas and we don’t want to go there.  Why give China advanced nukes, missiles, stealth aircraft, backdoors into all our military equipment and full access to all American commercial technology?
Why simply give China everything in America worth anything?  We had better ask Jeb but nobody seems concerned.  We had 12 years of Bush presidency, 8 of Reagan, the most disastrous of American history, the most criminal, the most corrupt.  I find it hard to remember who Hillary Clinton is when confronted with the overwhelming stench of the Reagan/Bush debacle.
Who would want to take America down, who hates us that much?  What we have learned is that those tasked with focusing on Hillary, the only person capable of stopping Jeb, are on the payroll of monsters.  Not all of us are blind, nor do we forget.

Gordon Duff is a Marine combat veteran of the Vietnam War.He is a disabled veteran and has worked on veterans and POW issues for decades.
Gordon Duff is an accredited diplomat and is generally accepted as one of the top global intelligence specialists.He manages the world’s largest private intelligence organization and regularly consults with governments challenged by security issues.
source »

7 thoughts on “The Painful Facts”