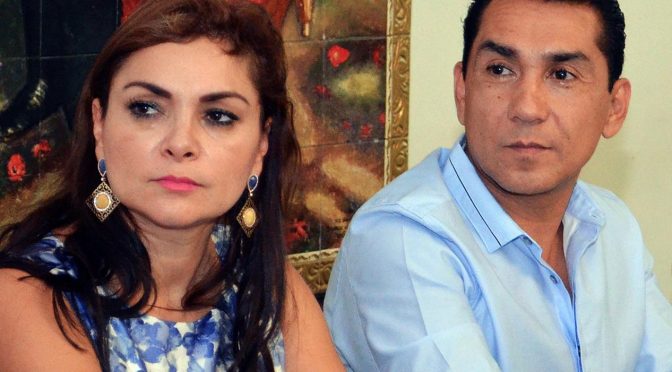 This is one way of preserving the corporate structure in the event of a major political storm, i.e. sacrifice a lower ranking stooge.

The wife of the Iguala mayor, who is accused of orchestrating the abduction and murder of 43 Mexican students last year, has been transferred to a federal jail.

Maria de los Angeles Pineda, known as Mexico’s ‘First Lady of Murder’, who founded the ‘Guerreros Unidos’ criminal cartel, faces charges of organised crime and multiple homicides.
The arrest of Mexico’s ‘imperial couple’ in a Mexico City slum was a major breakthrough in a case that once threatened to bring down Mexico’s government.
Pineda’s family have a long history of crime involvement. Both of her parents are behind bars for cooperation with the mafia, while three other siblings were murdered in incidents of gangland violence.
Despite her detention, many Mexicans still believe this is the government that should answer the tragic loss of the 43 students.
With the capture and prosecution of Mexico’s First Lady of Murder, the Mexican authorities hope to put the case of the 43 missing students to bed. Whether it will ease any of the pressure on Mexico’s government will depend on the extent to which the ‘imperial couple’ is scapegoated for the establishment’s failings.
source »