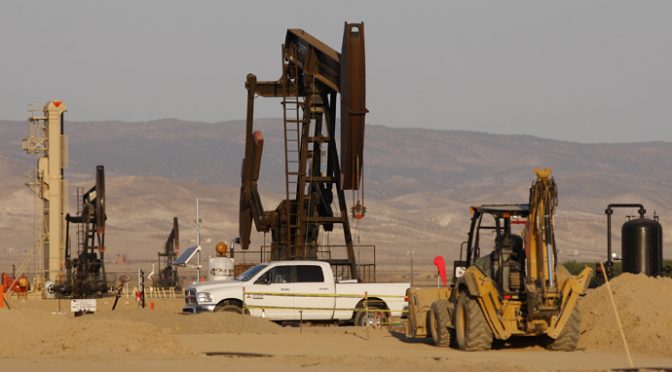 As expected, Saudi Arabia’s deliberate increases in oil production has not crippled Russia but Western energy companies only.

“There are too many ugly balance sheets,” warns one energy industry analyst, adding simply that “the group is not positioned for this downturn.” While the mainstream media continues to chant the happy-clappy side of lower oil prices, spewing various ‘statistics’ about how the down-side of low oil prices is ‘contained’ and the huge colossal massive tax cut means ‘everything is awesome’ for America, the data – and now actions – do not bear this out. Macro data has done nothing but disappoint and now, we have the first casualty of the shale oil leverage debacle as WSJ reports, on Sunday, a private company that drills in Texas, WBH Energy LP, and its partners, filed for bankruptcy protection, saying a lender refused to advance more money. There are many more to come…
In December we illustrated the problem names (in the publicly traded markets) among the most-levered energy companies in America…

And now, as The Wall Street Journal reports, the bankruptcies have begun as financing costs are not just prohibitive, there is no liquiidty available at any price for many…

American oil and gas companies have gone heavily into debt during the energy boom, increasing their borrowings by 55% since 2010, to almost $200 billion.
Their need to service that debt helps explain why U.S. producers plan to continue pumping oil even as crude trades for less than $50 a barrel, down 55% since last June.
But signs of strain are building in the oil patch, where revenue growth hasn’t kept pace with borrowing. On Sunday, a private company that drills in Texas, WBH Energy LP, and its partners, filed for bankruptcy protection, saying a lender refused to advance more money and citing debt of between $10 million and $50 million. Neither the Austin-based company nor its lawyers responded to requests for comment.
Energy analysts warn defaults could be coming. “The group is not positioned for this downturn,” said Daniel Katzenberg, an analyst at Robert W. Baird & Co. “There are too many ugly balance sheets.”
…
In 2010, U.S. companies focused on producing oil and gas had $128 billion in combined total debt, according to financial data collected by S&P Capital IQ.
As of their latest quarter, such companies had $199 billion of combined total debt.

Before crude prices began falling, U.S. oil and gas producers were able to acquire leases and drill wells even if that meant outspending their incomes. Debt was used to bridge the cash shortfall so that companies could develop oil fields in Texas, North Dakota and newer locations including Colorado.

Now that is coming back to bite.

The upshot of cash conservation and higher borrowing costs will be less money spent on producing oil and natural gas. Concho Resources Inc. said late Monday that it was cutting its capital spending budget by a third, to $2 billion.

And here is the bankruptcy filing in question in all its glory:

3 thoughts on “Bankruptcies on Energy Companies Have Begun”