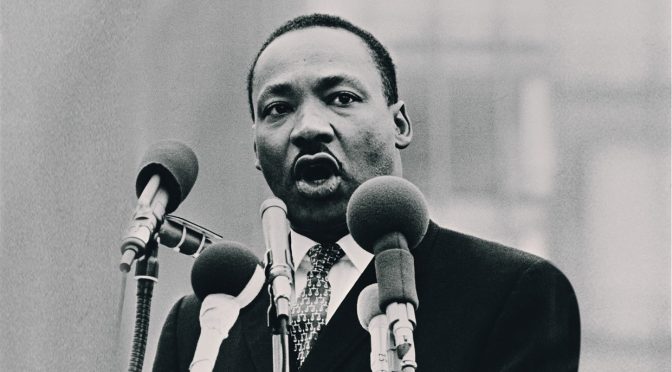 “We are now faced with the fact, my friends, that tomorrow is today. We are confronted with the fierce urgency of now. In this unfolding conundrum of life and history, there is such a thing as being too late. Procrastination is still the thief of time. Life often leaves us standing bare, naked, and dejected with a lost opportunity. The tide in the affairs of men does not remain at flood — it ebbs. We may cry out desperately for time to pause in her passage, but time is adamant to every plea and rushes on. Over the bleached bones and jumbled RESIDUES of numerous civilizations are written the pathetic words, ’Too late.’ There is an invisible book of life that faithfully records our vigilance or our neglect. Omar Khayyam is right: ’The moving finger writes, and having writ moves on.’ “We still have a choice today: nonviolent coexistence or violent coannihilation.”

Jan. 7, 2015 (EIRNS)—The Schiller Institue issued an invitation for a major conference they will be sponsoring in New York City on January 17
Today, the world is on a very short fuse to global war, instigated by the City of London and Wall Street, who are desperate to avert their own unavoidable financial-speculative collapse. The dim but nagging “gut feeling,” the realization that nothing can SAVE the dying trans-Atlantic financial empire, has produced increasing despair and desperation in large sections of the populations of Europe and in the United States.
How can peace be obtained? How can Dr. Martin Luther King, Jr.’s dream of economic justice be resurrected in today’s America? Schiller Institute chairwoman, Helga Zepp-LaRouche has emphasized that the only viable war avoidance option at this late moment is for the United States to accept the invitation extended to America recently by the nation of China, to work with the “BRICS” nations. The United States must reject the Wall Street/City of London “military-monetary complex,” and return to the system of physical production of wealth advocated by Alexander Hamilton, the first Treasury Secretary of the United States. The United States must ally itself with Brazil, Russia, India, China, and South Africa—the BRICS nations—and create a whole new, just world economic “platform”, what the Schiller Institute has termed “The World Land-Bridge.”
Forty years ago, economist Lyndon LaRouche outlined how the world could apply Alexander Hamilton’s principles of banking, production and labor to reject the depopulation policies of the Robert McNamara-era World Bank, and its then-plan to write off one billion people in what was termed the “Fourth World.” LaRouche’s 1975 plan included the role of controlled thermonuclear fusion reactions, or CTR, as the power-source for that new world economic arrangement. Then, with the fall of the Berlin Wall 25 years ago, Lyndon and Helga LaRouche invented and promoted successive economic concepts that have now, in principle, been adopted, by the BRICS nations and their allies. This includes the Chinese proposal for mining helium-3 on the Moon as a fuel source for thermonuclear fusion. This idea uniquely provides the basis for a joint China-U.S.-Russia-India collaboration in space, and an end to thermonuclear conflict forever.
Today, instead of this “Kennedy Apollo Project-Style” orientation, the United States has written off two generations of its youth. No productive jobs, no technological “New Frontier,” no real prospect for prosperity, no future. In contrast, Prime Minister Narendra Modi of India sees the 650 million young Indians, those under the age of 35, as his nation’s prime economic resource! Why has the United States turned its BACK on the American System?
Wall Street’s predatory “war monetarism,” and daily “re-assassination” of Alexander Hamilton’s U.S. Constitution, has made America invisible to itself. Our nation has become as Saturn, eating his own children, in the forclosed farms and shuttered factories, in the nation’s desolated cities, in the streets of Ferguson, Missouri, or Staten Island, New York, or the hills of West Virginia and Appalachia. New York City’s Police Commissioner has recently stated that the tragic violence and death in American cities “is about the continuing poverty rates, the continuing growing disparity between the wealthy and the poor. It’s about unemployment issues….”
This is economic injustice that Wall Street is practicing against American citizens. As Dr. Martin Luther King, Jr. often said: “injustice anywhere is a threat to justice everywhere.” The BRICS nations have now revived Dr. King’s dream of economic justice for all. The citizens of the United States have a moral obligation, under the General Welfare clause of our Constitution, to fight Wall Street’s overthrow of our republic, in the name of justice, for all the world.
Will America decide to recognize itself again? Will it decide to re-adopt the American System of economics that it has abandoned, or will it continue to be an unconscientious objector to its own American Revolution? An alliance with the BRICS nations, based on extending the General Welfare clause of the United States Constitution to all the world, is the only sure way to prevent global war through a policy of global physical-economic growth.
For more information and registration information, go to the Schiller Institue site.