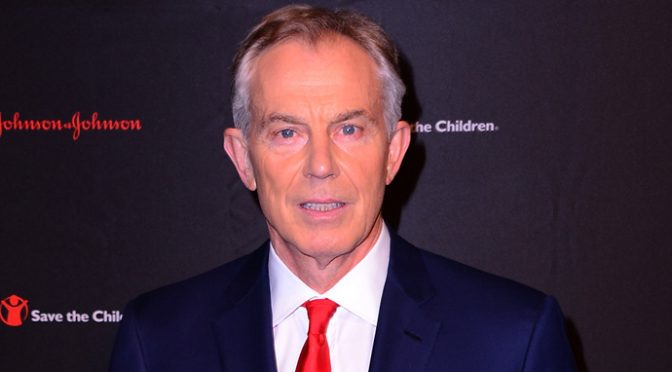 [Have you noticed the corporate logos at his back? More below…]
Tony Blair may face war crimes charges arising from the findings of a public inquiry into the role Britain played in the 2003 Iraq war, the House of Lords has been informed.

Lord Dykes of Harrow Weald, a Liberal Democrat peer, claimed the publication of the long-awaited findings of Sir John Chilcot’s inquiry into the Iraq war had been delayed to drag out the anguish of the ex-Labour Prime Minister.
Speaking in the House of Lords on Tuesday, Dykes said the continued delay of Chilcot’s report was an “utter and total disgrace.”
“More and more people think it is some kind of attempt to prolong the agony for Mr Blair facing possible war crimes charges,” he added.
At one time, Blair was one of Britain’s most popular prime ministers. But in the wake of damning allegations stemming from the 8-year war that blackened his political legacy, the former prime minister turned Middle East Envoy and business consultant is reviled by many in the UK.
Reflecting on Britain’s war in Iraq, Blair recently told Vanity Fair the invasion that he and US President George W. Bush pushed for was followed by a “long and hard and brutal and bloody” battle that was far more difficult than anyone had anticipated.
He insisted the problems that currently plague Iraq are “huge,” and denied they have been aggravated by the brutal war his administration presided over.


Lord Douglas Hurd, who held the position of Conservative foreign secretary between 1989 and 1995, warned on Tuesday the Chilcot report’s delay was no longer related to “mere negligence” and had become “a scandal.”
Addressing the House of Lords, Hurd said the delay of the report – which was originally due to be published three years ago – now held alarming national implications.

The last official public hearing relating to the Chilcot inquiry occurred in February 2011.
The primary reason for the delay in publishing the controversial probe’s findings was thought to have been related to conflict between the US State Department and Whitehall over declassifying confidential and potentially incendiary communications between Blair and then-US President Bush.
The communications in question related to the period prior to, during and after the Iraq war. On Tuesday, however, Lord Wallace of Saltaire confirmed negotiations over the publication of these conversations had come to a close.
Wallace, a government minister and Cabinet office spokesman, said if Chilcot’s report wasn’t released before the end of February, it would not be publically disclosed until after May’s general election.
He added the inquiry was independent of government and the report’s publication date was a matter for Sir John Chilcot, who headed the inquiry, to decide. Wallace emphasized it would be inappropriate for the findings of Chilcot’s inquiry to surface in the immediate run-up to the general election because Gordon Brown’s government had previously committed to allow adequate time “for substantial consultation and debate of this enormous report when it is published.”
The colossal one million-word document is expected to contain details relating to more than 200 Cabinet meeting discussions.
Lord Hurd heavily criticized the report’s extended delay, warning the British public deserves answers. “This is not something of trivial importance. It is something of which a large number of people in this country look anxiously for truth,” he said.
But Lord Wallace responded, insisting such delays were “not usual” for an inquiry of this nature.
Referencing other delays in publishing similar reports, Wallace concluded the Chilcot inquiry examined nine years of British foreign policy as well as military operations in Iraq, so its length was not surprising.

Labour former Attorney General Lord Morris of Aberavon argued ex-PM Gordon Brown, who set up the inquiry, had pledged that all UK documents, excluding those that posed a risk to national security, would be released.
Morris inquired whether Brown’s vow would be honored and demanded a concrete indication as to who would be responsible for presiding over the report’s publication parameters post May 15.
Lord Wallace said all relevant documentation had been examined as part of the probe, and discussions regarding which documents should be made public had been completed. In addition to US-UK tension over the publication of potentially inflammatory Bush-Blair conversations, a shortage of staff is thought to be central to the delay of Chilcot’s report.
Speaking in the House of Lords, Wallace said Chilcot’s team lacked sufficient manpower to sift through the enormous piles of documents required.
Draft reports of the Iraq war inquiry that surfaced in December rattled Britain’s establishment, with senior Whitehall figures battling to sanitize its findings.
One well-informed source told the Times that the report’s findings are far more scathing than expected, and have prompted a legal firestorm in the heart of the British establishment.
source »