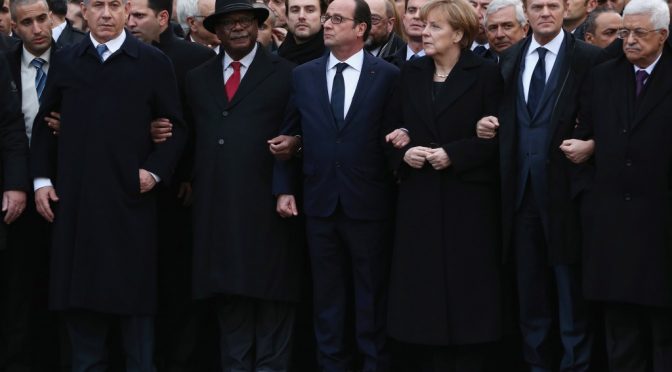 Sticking their faces on a botched false flag operation, this is probably the clearest sign that these Cabalists are in desperation and panicking of what’s to come soon.

March for Unity: Over 40 world leaders, ‘up to 3mn’ rally in Paris against extremism

Up to three million, according to local media estimates, are marching through Paris in solidarity with the 17 victims of the Charlie Hebdo attack and the three-day-long period of terror attacks. Over 40 world leaders joined the “cry for freedom” rally.
FOLLOW RT’S LIVE UPDATES

“Paris is the capital of the world today,” French President Francois Hollande said. “The whole country will rise up.”
“Fantastic France! I am told there could be as many as 1.3 million to 1.5 million of us in Paris,” Francois Lamy, the rally’s Socialist Party organizer, tweeted.
France’s Interior Ministry called the rally “unprecedented”, adding that the numbers were impossible to properly count because people veered off the officially stated route. However, French media put the number as high as 3 million, with some suggesting that there hasn’t been a march of the same level since Paris was freed from the Nazis in WW2.
The world leaders, among them German Chancellor Angela Merkel, Israeli Prime Minister Benjamin Netanyahu, and Russian Foreign Minister Sergey Lavrov, passed in silence through one of the main streets in Paris. The march began at Place de la Republique and headed towards Place de la Nation, approximately three kilometers away.

Sea of people in #Paris. #UnityMarch is about to begin soon. LIVE FEED: http://t.co/ZUlIbx54sf pic.twitter.com/4tHKsMLJIi

The relatives of the victims who were killed in the attacks headed another rally.
Security measures, in the light of recent events, have been extremely thorough, with some 2,200 security personnel watching over the route of the march.
continue reading »