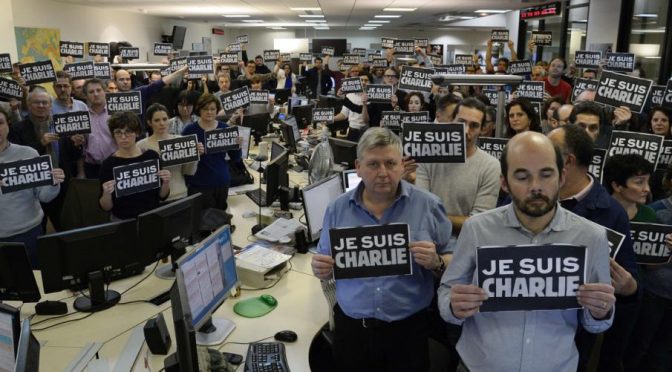 By Kevin Barrett, Veterans Today Editor
Call them sheeple. Lemmings. Zombies. New World Order mind control slaves.
Whatever you call them, the drooling dimwits chanting “we are Charlie” are the all-time greatest argument for Rockefeller-style eugenic euthanasia. (Which, incidentally, should start with the Rockefellers.)

And don’t get me started on those “world leaders” who led le défilé des idiots. These scumbag-psychopath “leaders” are the worst terrorists on earth. Take Netanyahu – please! Where are the black ski mask guys with AK-47s when we need them? Somebody call in a drone strike!
But seriously, folks, it isn’t easy being a three-digit-IQ Muslim in a world full of one-digit-IQ infidels. Frankly, I’m getting tired of trying to explain things to people who should know better…a category that includes pretty much everybody who isn’t too stupid to live.

It’s a dirty job, but somebody’s gotta do it.
First, this Charlie Hebdo thing (dramatic drum roll) is the most obvious freakin’ false flag imaginable. If inside jobs were hamburgers, this one would come with “the works” – throw-down ID in an abandoned getaway car, Police Commissioner conveniently suicided, intel-cutout patsies murdered, blatantly fake “terrorist kills cop” propaganda video…it doesn’t get any better (or should I say worse) than this.

One thought on ““#Je suis brainwashed””