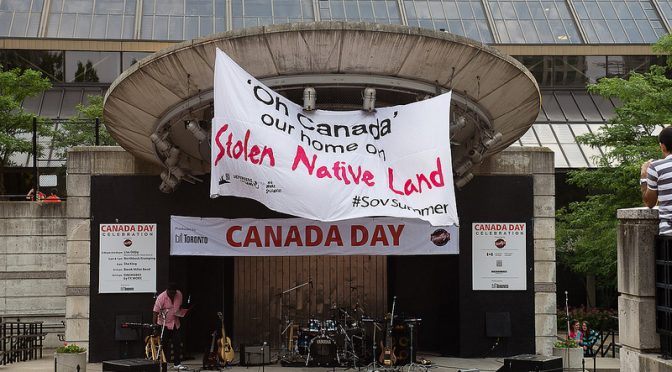 Dozens of Canadian Communities have declared Canada as a sovereign nation, and not as subject to the Crown of the Vatican or England.

http://youtu.be/Y-GWHU3rwME
The Proclamation establishing Kanata
Winnipeg:
After nearly two years of preparation, a new nation emerged today as the Republic of Kanata was publicly proclaimed in dozens of Canadian communities.
From Amherst, Nova Scotia to Port Alberni on Canada’s west coast, Republican organizers occupied town halls and court houses to proclaim Kanata.
A Proclamation of Independence and three accompanying Acts were read that have nullified ties with the British crown, established the Republic, and created a High Court of Justice to enact common law courts across Kanata.

“The corporation called Canada is null and void. As of today, the only lawful authority here is the Republic and its common law” said a representative of the Provisional Council for the Republic in Winnipeg this morning.
Nearly one thousand citizens of the new Republic are now actively establishing common law courts in every region and preparing delegations to the first General Congress of the new nation, to be held in Winnipeg from June 30 – July 3, 2015.

Thursday, January 15, 2015: The Republic is formally proclaimed and a High Court of Justice is established under common law. This provides the legal basis for common law courts and Citizen Grand Juries to operate under the new jurisdiction of Kanata.
Monday, January 19: Local common law courts and Grand Juries are established. Republican sheriffs are appointed to serve and enforce the Revocation (stand down) Orders to former crown agents.
Monday, February 16 – March 16: District Conventions are summoned to elect delegates to the first General Congress of the Republic, to be convened on Tuesday, June 30, 2015 in Winnipeg.
District One: Columbia
District Two: The Plains
District Three: Ontario
District Four: Quebec
District Five: Atlantic
District Six: The North
June 30 – July 3 , 2015: The first General Congress of the Republic convenes. The Constitution of the Republic is debated and adopted, and a Legislative and Executive branch is elected and ratified by the High Court of Justice.
Friday, July 3, 2015: The Government of the Republic of Kanata is officially established. Kanata Day is proclaimed as the first legal holiday of the Republic.
www.republicofkanata.com
Issued 9 January 2015 by the Provisional Council, Winnipeg
Colin Sullivan, Secretary

Canada is now under Common Law Jurisdiction:
A National Moratorium is declared on all Debts, Mortgages and Income Tax
A Proclamation issued under the authority of the Republic of Kanata and its High Court of Justice
LET IT BE KNOWN
That under the Proclamation of Sovereignty of January 15, 2015 that abolished ties between Canada and the Crown of England, all previous laws, statutes and regulations are nullified; all bills and notices from the former “government of Canada” are to be returned marked “Nullified by Claim of Right”; and all of the agents of the same former government have been order to stand down from their office, as their authority is now lawfully revoked.
Common law courts of the new Republic are operating in your region. Sworn sheriffs of these courts have the power to ensure the public peace.
You have the power now to take back your country. Do it by swearing loyalty to the new Republic of Kanata, and reclaiming the land, the wealth and the future for all of us.
Issued by the Provisional Congress of the Republic of Kanata in Winnipeg
www.republicofkanata.com , [email protected]

Canada is now under Common Law Jurisdiction:
“Crown” authority is revoked as a new government is established
A Proclamation issued under the authority of the Republic of Kanata and its High Court of Justice
LET IT BE KNOWN
That under the Proclamation of Sovereignty of January 15, 2015 that abolished ties between Canada and the Crown of England, all governmental authority now resides in an elected Congress and Office of the President, and other delegated bodies to be established by the Sovereign People.
All former officials of the “Crown” and the “Dominion of Canada” have been ordered to stand down, as their authority is now revoked. They will be replaced by newly elected and recallable governmental bodies in every community, based on a general franchise of every man and woman sixteen years and older.
You can ensure the establishment of this new democratic Republic by swearing loyalty to the Republic and serving as one of its officers. Common law courts and their sheriffs are active in your community to ensure the peaceful transition to the Republic of Kanata.
Issued by the Provisional Congress of the Republic of Kanata in Winnipeg www.republicofkanata.com , [email protected]

1. Kevin Annett addresses the enormous breakthroughs made by ITCCS and the common law movement during 2014; and the counter attacks launched against him and the movement by misinformers and black operators:  http://youtu.be/Iyfm8eceAm82. In this addendum to Kevin Annett’s 2015 New Year’s Message, he clarifies why the common law court record and the identity of the judges are confidential for now. Kevin points to the evidence that has been published from both common law court cases that convicted the pope and queen for crimes against humanity: http://youtu.be/9X81TmryDJw
​Issued 4 January, 2015 GMT
www.itccs.org