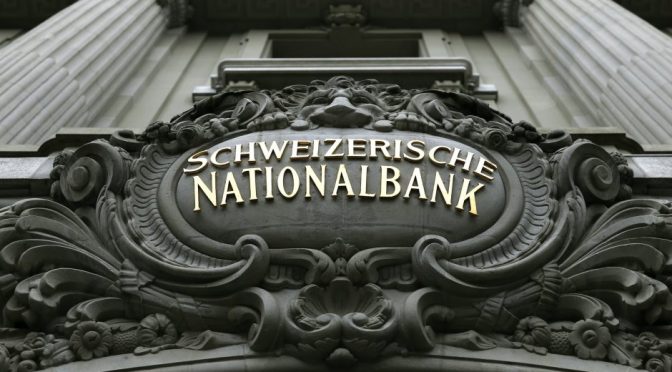 Last week, the Swiss National Bank decided to abandon the cap of its own currency, and allowed it to appreciate against the Euro. This move prompted investors to move away from the Euro in favor of gold and silver.
Interestingly, this Swiss move comes just a few days from the BRICS financiers’ meeting at the sidelines of the Davos Summit 2015.

Such a move could pave the way for the anticipated end of the EU currency. 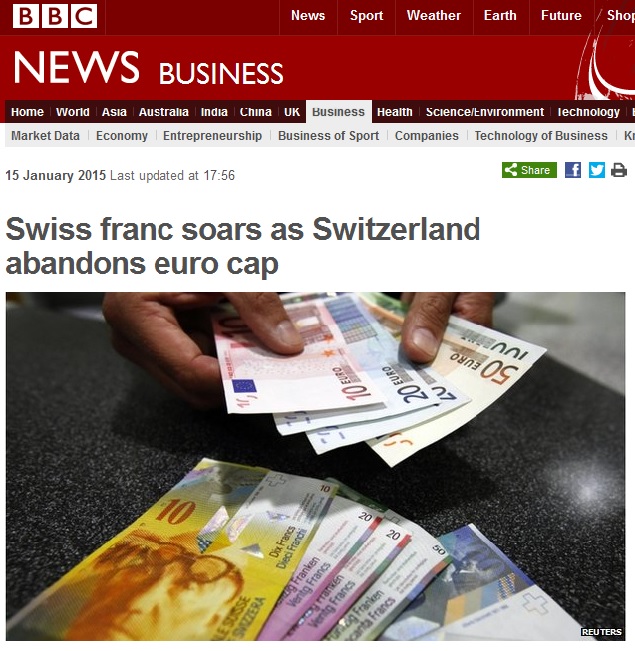 The Swiss franc soared as much as 30% in chaotic trade after the central bank abandoned the cap on the currency’s value against the euro.
The Swiss National Bank (SNB) said the cap, introduced in September 2011, was no longer justified.
It also cut a key interest rate from -0.25% to -0.75%, raising the amount investors pay to hold Swiss deposits.
The International Monetary Fund’s head, Christine Lagarde, called the move “a bit of a surprise”.
She said she was also surprised that the governor of the Swiss National Bank had not contacted her, and said she hoped he had communicated the plan to his fellow central bank governors.
Following the SNB move the euro went from buying 1.20 francs to buying just 0.8052, but it later recovered to buy 1.04.
Swiss shares closed down 9% and stock markets around Europe fell with investors buying “safe haven” assets such as gold and German bonds.
continue reading »

In the wake of the Swiss National Bank shocking the market this week de-pegging the CHF from the Euro, the Golden Jackass Jim Willie joined us over the weekend for an Exclusive Interview discussing:

One of Jim Willie’s Most Dynamic & STUNNING Interviews EVER is below:
The Doc began by asking the Golden Jackass his thoughts on the Swiss Franc de-pegging from the Euro:
– tipped off on Draghi EuroCB decision to proceed with QE bond monetization
– Currency interventions are coming to a CLIMAX!
– could be as simple as Swiss bank noticing the physical gold flows
– Swiss act as gold coordinator (see Bank For Intl Settlemt) and guide for refiners
– could anticipate German departure from common Euro currency
– could anticipate Greek Exit and huge shock waves
– numerous factors could lead to widespread European bank failures
Willie made a STUNNING prognosis for 2015- Death of the dollar and GOLD REVALUATION:
– energy trade gradually excluding USD
– key upcoming element is Saudi/OPEC acceptance of non-USD
– US losing control of USD and oil price (Petro-Dollar demise in full view)
– US oil industry at great risk ($2 trillion in shale bond all subprime)
– convergence of Brent & WTexas oil price signal in 2013
– US blocks all reset Currency & Gold market reform
– therefore East will force Gold Standard through trade channels
– Eastern capital development and asset acquisition will be done on USTBond tab
– East led by BRICS are to shun avoid reject the USD
– QE has accelerated all movements to remove the USD from trade and banking
The Doc then asked Will for his take on the upcoming Greek elections- will we see a GREXIT?
– potential for European bank runs, bail-ins
– ELA is Emergency Liquidity Assistance
– four big Greek banks ask aid
– Syriza Party seeks to abandon austerity and probably the common Euro currency
– debt default likely following EUR 240bn bailout
– EU 195bn debt owed to EU nations = 4% of EU govt budgets
Germany 56.5bn,  France 42.4bn,  Italy 37.3bn,  Spain 24.8bn,  Dutch 11.9bn
– GREXIT     will blow up EU on fiscal side
– Swiss Natl Bank                        on currency side
– USGovt sanctions                     on economic side
– Germany                                    on monetary side
– Ukraine                                      on energy side
source »