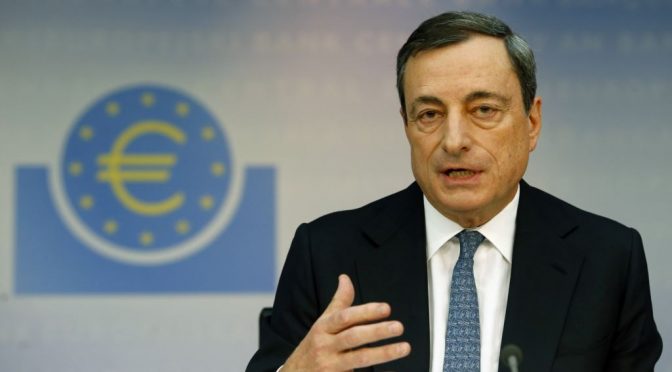 The European Central Bank President Mario Draghi has decided to flood the Eurozone with Federal Reserve type quantitative easing in the staggering amount of €1.1 Trillion!
As expected the Euro fell, and the Swiss National Bank was right when it decided to decouple the Francs away from the Euro.

The European Central Bank announced it will embark on a fully-fledged quantitative easing program from March, which will break down to €60 billion per month. The move is made to counter a triple-dip recession in the eurozone.
“Under this expanded program, the combined monthly purchases of public and private securities will amount to €60 billion, intended to be carried out to 2016,” Draghi said Thursday. The bank will buy €1.14tn ($1.3 trillion) in government debt, a decision that will inject extra money into supply, spurring a devaluation in the currency.

Draghi: Combined monthly purchases will be €60 billion, to be carried out at least until end-Sept 2016

His full statement is available on the ECB wesbite.
After the announcement, the euro fell 1.2 percent against the dollar to $1.14, an 11-year low for the currency shared by the 19 nations of the eurozone.

“All monetary measures should provide support to the euro area recovery,” Draghi said, stressing that the package will help investments and boost economic activity.
The bank is far below its target inflation rate of 2 percent, and fell into negative territory in December at -0.2 percent. Draghi said that the actions will be conducted until the bank sees a sustained adjustment in inflation.
The value of the euro has been slipping against the dollar hit an 11-year low against the greenback. At the time of the decision, the euro was trading at $1.16, not far from $1.17 it made at its debut in 1999, the year the currency union was formed.
QE alone can’t revive the battered EU economy, and it will be “up to governments to enact these monetary reforms,” the ECB chief said, adding that the decision taken unanimously by the Governing Council, in a nod to Germany, which publicly rejected the policy.
Germany, the blocs largest economy, has voiced staunch opposition to the plan, and has challenged the legality of the program.
As a sort of concession to Germany, which didn’t support QE, 20 percent of the bank’s bond purchases will be undertaken by national central banks.
Confidence in the south of the EU was shattered, as bond yields in countries like Italy and Spain fell to record lows. The president said that the bank may purchase bonds in Greece after July.

The 19-nation eurozone would be following in the steps of the US, UK, and Japan, which all have created new money to keep their economy afloat during the crisis. The US program created $4.5 trillion in government bonds in total.
Leading up to the announcement, the Swiss National Bank ditched its euro peg, as a QE program would further devalue the euro, and the Swiss franc along with it.
QEs have been largely criticized for not delivering real effect to ordinary people, since the money flows into the bond market and not into people’s direct spending power.
READ MORE: EU better off with ‘helicopter checks’ not QE
The next obstacle for the eurozone is Greece which holds a general election on January 25, where left-wing SYRIZA is poised to take control of the fragile economy that hasn’t seem a significant improvement under its EU bailout plan. In campaign speeches, SYRIZA leaders have promised to re-negotiate the austerity terms the country was forced into. Analysts worry about the political and economic effect on the continent should there be a ‘Grexit’ from the euro.
source » 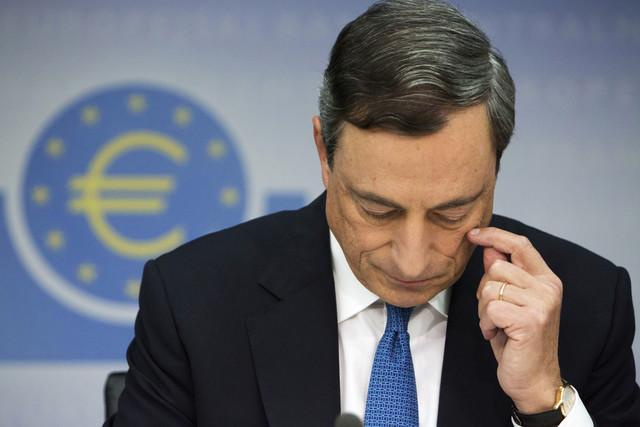 Out of media player. Press enter to return or tab to continue.

The European Central Bank (ECB) says it will inject at least €1.1 trillion into the ailing eurozone economy.

The ECB will purchase bonds worth €60bn per month until the end of September 2016 and possibly longer, in what is known as quantitative easing (QE).
The ECB has also said eurozone interest rates are being held at the record low of 0.05%, where they have been since September 2014.
ECB president Mario Draghi said the programme would begin in March.
He said the programme would be conducted “until we see a sustained adjustment in the path of inflation”, which the ECB has pledged to maintain at close to 2%.
He told a news conference the ECB would be purchasing euro-denominated investment grade securities issued by euro-area governments and agencies and European institutions.
However, “some additional eligibility criteria” would be applied in the case of countries under an EU and International Monetary Fund adjustment programme.
The value of the euro fell following Mr Draghi’s announcement, falling by more than a cent against the US dollar to $1.1472.

Earlier this month, figures showed the eurozone was suffering deflation, creating the danger that growth would stall as businesses and consumers shut their wallets, as they waited for prices to fall.
Continue reading the main story

The eurozone is flagging and the ECB is seeking ways to stimulate spending.

Lowering the cost of borrowing should encourage banks to lend and eurozone businesses and consumers to spend more.
It is a strategy that appears to have worked in the US, which undertook a huge programme of QE between 2008 and 2014.
The UK and Japan have also had sizeable bond-buying programmes.
‘Sizeable’ slack
Mr Draghi said the ECB’s own programme had been taken “to counter two unfavourable developments”.
“Inflation dynamics have continued to be weaker than expected,” he said, with most inflation indicators at or close to historical lows.
“Economic slack in the euro area remains sizeable and money and credit developments continue to be subdued,” he added.
At the same time, it was necessary to “address heightened risks of too prolonged a period of low inflation”.
Mr Draghi said there had been a “large majority” on the ECB’s governing council in favour of triggering the bond-buying programme now – “so large that we did not need to take a vote”.

What is a government bond?
Governments borrow money by selling bonds to investors. A bond is an IOU. In return for the investor’s cash, the government promises to pay a fixed rate of interest over a specific period – say 4% every year for 10 years. At the end of the period, the investor is repaid the cash they originally paid, cancelling that particular bit of government debt.
Government bonds have traditionally been seen as ultra-safe long-term investments and are held by pension funds, insurance companies and banks, as well as private investors. They are a vital way for countries to raise funds.

Up until now, the ECB has resisted QE, although Mr Draghi reassured markets in July 2012 by saying he would be prepared to do whatever it took to maintain financial stability in the eurozone, nicknamed his “big bazooka” speech.
Since then, the case for quantitative easing has been growing.
In advance of the ECB’s announcement, there had been speculation that the central bank would not actually buy any bonds itself, but would invite the central banks of eurozone member governments to do so.
In the event, Mr Draghi said only 20% of the new asset purchases would require national central banks to shoulder risks outside their own borders.
But he added: “The modalities, the amounts, the rules, the limits that you just asked me about have been decided here in Frankfurt. So the governing council is the sole decision-maker and the decisions are meant to affect monetary and financial conditions across the whole euro area.”
source »

From “whatever it takes” to OMT to “discussing” bond purchases, with European interest rates at record (incomprehensible) lows (apart from Greece) and EURUSD at 11-year lows (down 25 handles in the last 8 months), Mario Draghi looks set to unleash interventionist ‘hell’ on the investing public in Europe with EUR50 billion (plus plus) of ECB QE per month for as long as it takes.

And then there’s this:

Live Feed below (in case of error, here is a link to the source webcast):

Here are the highlights, which confirm that yesterday’s widespread rumor was a market-testing trial balloon:

Initial kneejerk reactions have started to fade but overall Europe is ‘positive’ as EURUSD is lowerand stocks higher (excepty Germany’s DAX which is at the LoD) but Sovereign spreads are higher. Initial exuberance in US equities have been entirely erased. Treasury yields are now lower as gold and silver are bid and crude and copper sold. We’re gonna need a bigger bazooka Mr.Draghi…

Gold and Silver up, Crude and Copper down…

One thought on “€1.1 Trillion QE for Eurozone Announced; Euro Falling”