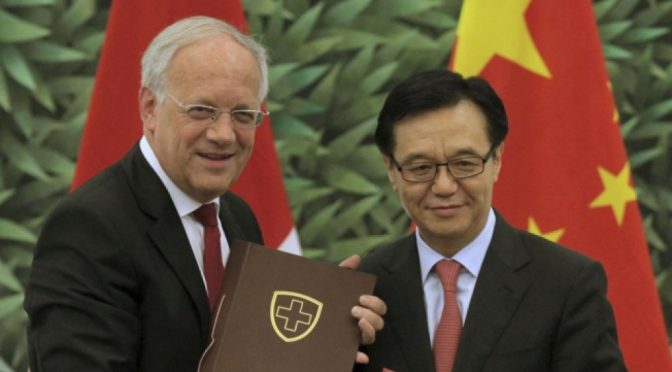 The global movement away from the dollar continues to gain traction when the Swiss central bank signed a pact with China to trade only in yuan or renminbi.
Still, the mainstream media refuse to cover this significant departure…

The central banks of China and Switzerland have signed a pact to establish a yuan trading center in Zurich. The deal is expected to increase the number of European transactions in yuan.
Switzerland’s central bank said on Wednesday it had signed the agreement with the People’s Bank of China. The deal was concluded during the visit of Chinese Prime Minister Li Keqiang to the World Economic Forum in Davos.
According to the agreement, Switzerland will receive a quota of about $8 billion (50 billion Yuan).
“It [the arrangement] will promote the use of the renminbi by enterprises and financial institutions in cross-border transactions, and promote facilitation of bilateral trade and investment,” the Swiss National Bank said in a statement.
This step comes under the framework of the QFII (Qualified Foreign Institutional Investor) program that allows foreign investment in Chinese securities using foreign currencies. Similar centers already exist in Hong Kong and London.
READ MORE: China overtakes Japan to become world’s second largest stock market
In July 2014, the central banks of China and Switzerland signed an agreement on a $24 billion (150 billion yuan) currency swap to boost bilateral trade and economic relations.
China, the world’s second largest economy, has been pushing the yuan as a rival to the dollar in the global financial system since 2010. In November 2014, the Bank of China started to operate European yuan clearing in Frankfurt.
READ MORE: Frankfurt begins first European direct settlements in Chinese yuan
The Chinese yuan is traded directly against the dollar, euro, the Japanese yen and Russian ruble among other currencies. Settlement worldwide in yuan reached $485 billion (3.01 trillion yuan) in 2013 compared to $330 billion (2.06 trillion yuan) in 2012.
source »

Countries Moving Away From Dealings With The US Dollar

The International Monetary Fund (IMF) has stated that Iraq has added 36 tons of gold bullion to its reserves. This has a value of 1.5 billion dollars. The Central Bank of Iraq (CBI) is purchasing large amounts of gold to back the Iraqi dinar currency. The CBI is doing what other countries around the world have done in the past. It is apparent that countries are moving away from the U.S. dollar. There are numerous news articles from credible news sources stating that countries around the world are moving away from the U.S. dollar.
I have shared some of the links/articles below.
In November 2010, the China Daily news organization reported that Russia and China have signed an agreement to conduct all trade in their local currencies. Appears that they are kicking the U.S. dollar to the curb.
The U.S. Federal Reserve has decreased the buying of debt from the U.S. government and China has also decreased their purchasing at the U.S Treasury office.
Russia and China are not the only two countries that have moved away from the U.S. dollar. Germany, a long time ally of the United States, has also made agreements with the Chinese government to conduct trade in yuan and euros.
In Feb 2011, the International Monetary Fund (IMF) called for a U.S. dollar alternative. The United Nations has also called for a new global currency to replace the U.S. dollar. This is all pointing to a global currency reset that the IMF leader spoke of in the past. Clearly, they want to remove the U.S. dollar as the world’s reserve currency. Also, the petro dollar will be no longer be the world’s reserve currency.
China and Brazil have signed agreements to only conduct trade in their local currencies. Moving away from the U.S. dollars.
China and Australia have signed agreements with each other. The article also mentions South Korea, Turkey and Kazakhstan. They all have agreed to conduct trade in a currency swap in their own respective currencies.
China and Japan have signed agreements to conduct trade in yuan and yen. There will be no U.S. dollars in their trade between the two countries.

China and United Arab Emirates (UAE) have currency swaps in their local currency. They will be conducting trade in yuan and dirhams.
The BRIC nations consist of Brazil, Russia, India, China and South Africa. They have all signed agreements with each other to conduct trade in their own local currency. This once again leaves the U.S. dollar out of all international transactions.
Iraq is following suit. Don’t get me wrong, they are currently still using the U.S. dollar but changes are in the works. Iraq still accepts payment for their oil and gas in U.S. dollars. However, in the future that may not be the case as they continue to back their currency with gold. It looks like they are strengthening the Iraqi dinar reserves with gold in order to move away from the U.S. dollar in the future. They recently signed agreements with India to conduct trade in both countries using local currencies. You will see Iraq conduct these type of arrangements in the future.
Coming July 2014, there will be a new law on the books. I am looking into the law and trying to do more research on this. However, some of what I am learning is that after 1 July 2014 all world wide banks have to comply and report to the Internal Revenue Service (IRS) any transactions made in U.S. dollars. Like I said,…I am still looking into this law and as soon as I get a more information I will share and post here.
Comment below on what you think about the U.S. dollar losing its position in the world.
Contact American Contractor at Email: [email protected]  Make sure to sign up to my mailing list by clicking this link.  After signing up check your email for the confirmation.
source »

The World of Energy