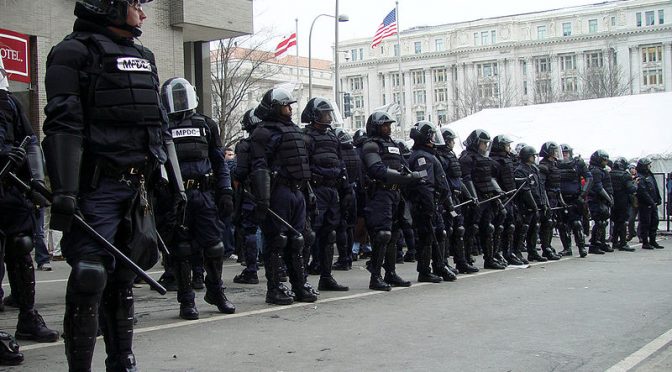 For most any government, maintaining power is the ultimate bottom line. Without a power foundation solid as a 47-story steel-frame skyscraper, a government cannot climb the stairway to tyranny—hold the aphrodisia.

by Rand Clifford
“Power is the ultimate aphrodisiac.”
—  Henry Kissinger (Nobel Peace Prize, 1975)
If a government can expand their power over the governed with such as The Patriot Act, National Defense Authorization Act, Department of Homeland Security, ,Federal Emergency Management Agency…there’s Dr. Kissinger’s aphrodisia—the Psychopathic Power Rush (PPR).
Heroin, power, cocaine, methamphetamine…“hard” drugs demand ever-increasing doses to keep the rush satisfying. Regarding the PPR, all questions lead to: How brutally can government tyrannize, how far can they push before sufficient numbers of the governed realize whose interests government actually serves? The governed are, at the very best, unsecured creditors, last in line. Banks, that’s whose interests are not only at the front of the line, banks own the line. Very little trickles past banks to serve interests behind theirs because government works for those who have a monopoly on creating “money” from nothing.
Regarding the question of how far the governed can be tyrannized before actually protecting themselves; historically, that question has sometimes been answered by: Revolution. But let’s not get hasty, tyranny has so many tentacles. And Napoleon Bonaparte might tell you:
“History is a set of lies agreed upon.”
One part of history not a set of lies….
In 1787, Alexander Tyler of the University of Edinborough wrote that all democracies go through eight stages, two hundred years being the average cycle time. The stages are:
From bondage to spiritual faith;
From spiritual faith to great courage;
From courage to liberty;
From liberty to abundance;
From abundance to complacency;
From complacency to apathy;
From apathy to dependence;
From dependence back to bondage.

Our only chance of defending ourselves is to understand our enemy. But is it even possible for people born with a conscience to understand living without a conscience? 1% of people are born without brain structure for conscience, empathy, compassion…(something a Magnetic Resonance Imaging {MRI} brain scan reveals). Just 1% illuminate the paralyzing problem of 99% having no way to relate to, even little chance of imagining, living with zero conscience. No compassion, no empathy…just, I. But to get what they want, psychopaths employ many faces.
Does power corrupt, or do the corrupt seek power? The saturation of politics by psychopaths is dragging us up the stairway to tyranny. The heavy lifting is done by people born with power lurking as the ultimate aphrodisiac. Power did not corrupt Henry Kissinger, he was born corrupt. Perhaps we should focus on keeping such people at least far enough away from power not to win a Nobel Peace Prize? Alfred Nobel invented dynamite. Psychopaths came up with “Nobel Prizes”.
Psychopaths rarely leave anyone alone. If you have something they want, they can do things normal people might never imagine to get whatever that something is. If you have liberties, any freedom…psychopaths in power target those first because when those are gone it’s easier to separate you from everything else. That’s what they want, everything desirable that anyone else has, and control of what everyone needs to survive. Khazars will always be Khazars no matter what institutionalized faith they adopt. Evil can only do evil. Our main problem is those who would rather just sleep through it, faithful of, you know: “…tomorrow’s another day”.
Psychopaths in power want that day. Commandment Number One of the “Georgia Guidestones” will explain. [14]
Perhaps enough of us will wake up in time for our vast superiority in Humanity to protect Humanity. But so blinded with faith, do we deserve to wake up?
W.C. Fields did say:
“Sleep – the most beautiful experience known to man – except drink.”
1)   http://www.informationclearinghouse.info/article20067.htm
2)  https://www.google.com/search?q=zionist+control+of+media&tbm=isch&tbo=u&source=univ&sa=X&ei=hlG4VNTuBZO1yASi2YL4Cw&ved=0CD0QsAQ&biw=1024&bih=657
3)  http://www.biblestudysite.com/factsarefacts.htm
4)  http://en.wikipedia.org/wiki/Stockholm_syndrome
5)  https://www.youtube.com/watch?v=5cFewUG3rSY
6)  https://www.youtube.com/watch?v=ltP2t9nq9fI
7)  https://www.youtube.com/watch?v=-jPzAakHPpk
8)  http://www.bj.org/Articles/examining-the-mystery-of-kol-nidre/
9)  https://www.google.com/search?q=Metzitzah+b%27peh&tbm=isch&tbo=u&source=univ&sa=X&ei=sF64VIayBob8yQTC-4CIDw&ved=0CDYQsAQ&biw=1024&bih=657
10)  https://archive.org/details/Dracula1931_938
11)  http://www.greatchange.org/ov-martin,case_for_sedition.html
12)  http://www.intrepidreport.com/archives/6020
13)  https://www.google.com/search?q=hillary+clinton+covers+mouth+situation+room+bin+laden+killing&tbm=isch&tbo=u&source=univ&sa=X&ei=r6K5VPOfBITfoAS6t4DgAw&ved=0CB8QsAQ&biw=1024&bih=657
14)  http://georgiaguidestone.blogspot.com/
Rand Clifford’s novels are published by StarChief Press. Email contact: [email protected]
source »