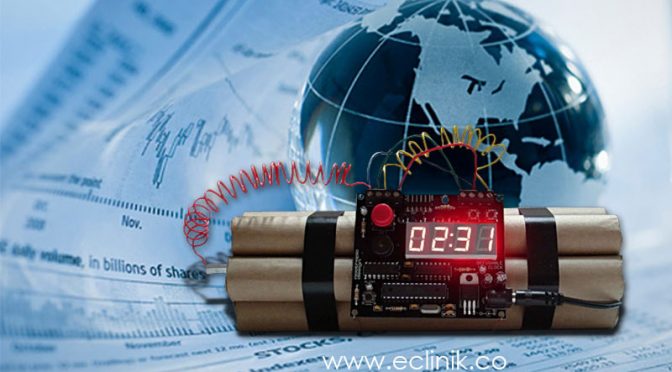 Syriza’s rise to power in Greece spells the end of the Euro and the high probability of the $100 Trillion derivatives bubble to burst. This obviously is causing sleepless nights for the Cabal.
This is probably one of the reasons why New York City must be shut down in order to give the wolves in Wall Street plenty of time to regroup.

Once Greece files for the renegotiation of its sovereign debt it will be the beginning of the end of the euro due to the fact that every country that is not happy with the bailout of their banks instead of their economy will surely follow suit.
A bailout only rescue the Banks, at the very top of which are owned only by one entity, the Vatican through its exclusive banker the Rothschilds, leaving the people in unfair austerity measures so they could collectively pay the loans through massive taxation as required by those vulture funds.

Will Greece Burst the Bond Bubble?
For over 30 years, sovereign nations, particularly in the West have been buying votes by offering social payments in the form of welfare, Medicare, social security, and the like.
When actual bills came due to fund this stuff, Governments quickly discovered that current tax revenues couldn’t cover it (see the image below)… so they issued sovereign debt to make up the difference.
And so the global bond bubble was created.
As far back as 2009, most Western nations were completely bankrupt when you consider unfunded liabilities from their social policies. But Central Banks did everything they could to paper of this fact by soaking up as much bond issuance as possible while simultaneously maintaining zero interest rates. 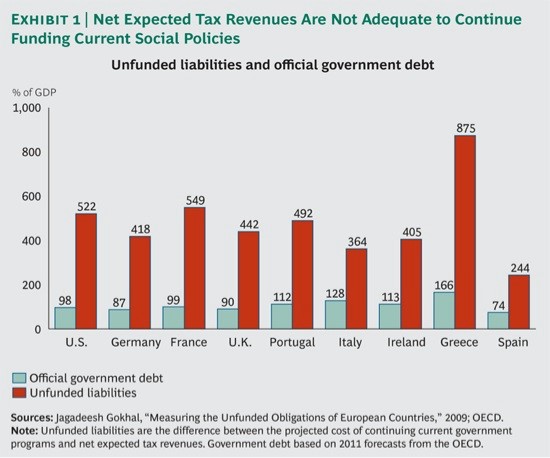 Throughout history, Central Banks have tried to inflate away debts for as long as possible. They do this right up until:
1) The debt loads are impossible to manage, or…
2) It becomes politically unsavory to print more money.
We have just reached #2 for Greece.
continue reading »

Why Are Central Banks Terrified of Debt Restructuring?

Submitted by Phoenix Capital Research on 01/30/2015 10:16 -0500
Back in 2012, Mario Draghi promised to “do whatever it takes” to hold the Euro together.
A lot of analysts interpreted this statement in a literal sense. However they are incorrect.
Draghi is willing to…
1)   Confiscate wealth by cutting interest rates to negative.
2)   Permit regulators to seize bank accounts to “bail-in” banks.
3)   Verbally intervene every time possible provided it pushes yields on EU nation sovereign bonds lower.
4)   Buy EU sovereign bonds despite the fact that this clearly violates the Maastricht Treaty (the treaty that formed the Eurozone).
However, what Draghi is NOT wiling to do is restructure ANY EU sovereign nation’s debt.
Why is this? After all, everyone knows that the whole problem for the Eurozone is TOO MUCH DEBT. And given that all of his efforts to inflate this debt away have failed miserably, a debt restricting is the only real option left.
Not to mention, debt restricting would actually reduce the leverage in the system and permit the Eurozone to return to growth.
Draghi won’t let this happen because he, like all Central Bankers in the world, is concerned about one thing: the bond bubble.
Globally, the bond bubble is $100 trillion in size. And sovereign bonds (the ones the EU doesn’t want to restructure) are used as the senior most collateral backstopping the big Eurozone banks’ derivatives portfolios.
Put another way, the €12 trillion in collected EU nation sovereign debt, is backstopping over €100 trillion in derivatives trades on the banks’ balance sheets.
Thus ANY debt restructuring in the EU would almost immediately blow up the large Eurozone banks because you’re talking about tens of trillions of Euros’ worth of trades having requiring margin calls/ new collateral arrangements.
This is particularly true because you’re not talking about just one nation restructuring its debt. All of the PIIGS would be up for debt restructuring followed eventually by France.
At that point, the entire EU banking system implodes and Mario Draghi is in the unemployment line.
You can see this line of thinking in the EU’s second bailout of Greece. If you read between the lines, you it’s obvious what really happened and what really mattered to the ECB during the Greek bailouts.
Remember:
1)   Before the second Greek bailout, the ECB swapped out all of its Greek sovereign bonds for new bonds that would not take a haircut.
2)   Some 80% of the bailout money went to EU banks that were Greek bondholders, not the Greek economy.
When the ECB swapped out its Greek bonds for new bonds that would not take a haircut during the second Greek bailout, the ECB was making sure that the Greek bonds on its balance sheet remained untouchable and as a result could still stand as high grade collateral for the banks that had lent them to the ECB.
So the ECB effectively allowed those banks that had dumped Greek sovereign bonds onto its balance sheet to avoid taking a loss… and not have to put up new collateral on their trade portfolios.
Which brings us to the other issue surrounding the second Greek bailout: the fact that 80% of the money went to EU banks that were Greek bondholders instead of the Greek economy.
Here again, the issue was about giving money to the banks that were using Greek bonds as collateral, to ensure that they had enough capital on hand.
Piecing this together, it’s clear that the Greek situation actually had nothing to do with helping Greece. Forget about Greece’s debt issues, or protests, or even the political decisions… the real story was that the bailouts were all about insuring that the EU banks that were using Greek bonds as collateral were kept whole by any means possible.
This is ALSO why the ECB doesn’t want Greece to restructure its debt today: doing so would begin to blow up the derivatives market eventually leading to the collapse of the big EU banks (the very banks Draghi has been trying to prop up at the expense of the Greeks, and other Europeans).
Draghi will do “whatever it takes” provided it doesn’t hurt the big bank. Unfortunately for him, he may no longer have a choice.
If you’ve yet to take action to prepare for the second round of the financial crisis, we offer a FREE investment report Financial Crisis “Round Two” Survival Guide that outlines easy, simple to follow strategies you can use to not only protect your portfolio from a market downturn, but actually produce profits.
You can pick up a FREE copy at:
http://www.phoenixcapitalmarketing.com/roundtwo.html
Best Regards
Phoenix Capital Research