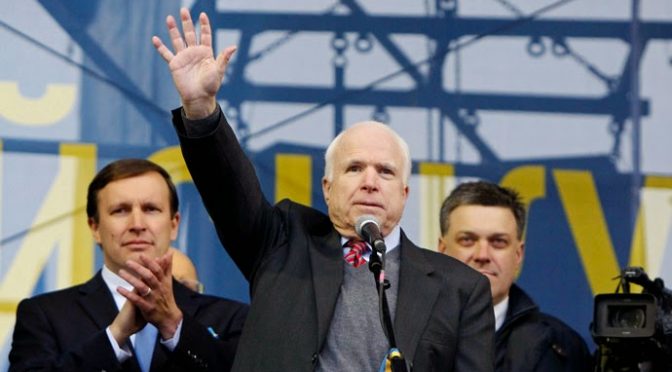 Kiev military forces are suffering from demoralization and poor logistics, and its eventual defeat is just a matter of time. But it doesn’t mean that the West has not achieved its objectives.
Just like all other countries the Nazis have laid their fingers into, Ukraine will be in perpetual turmoil in the years to come.
There is a need to eliminate the Nazis, every single one of them.

Thousands of Ukrainian troops thought to be trapped in Donbass

At least 7,000 Ukrainian troops are believed to be surrounded near the village of Debaltsevo in Donbass, as militia units cut off the only road linking the pocket to Kiev-held territory. The servicemen have been offered the chance to surrender.
The forces of the People’s Republic of Donetsk (DPR) have stormed and captured the town of Uglegorsk, a stronghold of the Ukrainian army in the east of the country used for communication and supply. It is about 10 kilometers from Debaltsevo.
continue reading »

Published time: January 28, 2015 17:13
Edited time: January 28, 2015 18:52
Ukraine’s subversive hacker group CyberBerkut has published documents allegedly exposing dreadful situation with the Kiev’s troops attacking separatist forces in the East: war crimes, tremendous loss of lives and wholesale desertion of entrapped troops.
The anti-government activists claim they have hacked personal computer of Ukraine’s Judge Advocate General and copied a number of classified documents. These documents are allegedly exposing some dark secrets of Kiev’s authorities regarding the real state of things in the zone of the so-called ‘anti-terrorist operation’ in the eastern Donetsk and Lugansk regions of the country. And Hell was following them…

But these things are beyond the scope of rational analysis. They are matters of luck.

Rostislav Ischenko, president of the Center for system analysis and forecasting, exclusively for the “Current Comments”.