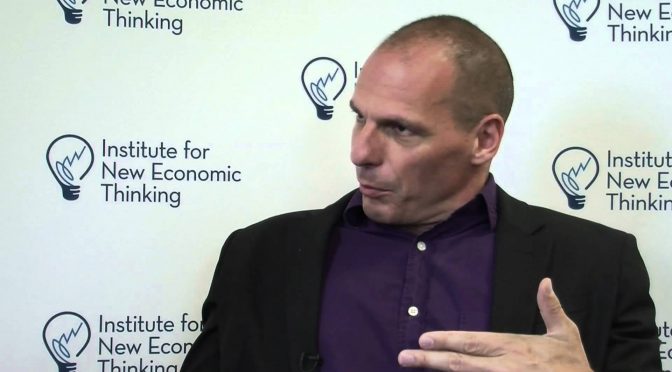 Europe’s Oligarchy has been caught off-guard by the look, style and character of the new finance minister in Greece, and they have all reasons to be.

As opposed to the high and mighty look of the kleptocracy, he projects an image of an everyday person, but more importantly, he means business.
To underscore the Greeks abhorrence to more austerity measures, he did this while on the way to meet UK’s George Osborne…

Simon Jenkins
What was going on was real life. If I were a banker and had seen Varoufakis arrive in the same dark suit as Osborne was wearing, what would I think? I would think here was a man eager to be accepted into the club. He dresses like a banker, therefore he thinks like a banker, which is how today’s finance ministers are supposed to think. I would be reassured.
We don’t want bankers to be reassured by Varoufakis just now. We want them to be terrified. Don’t mess with me, he is saying. I have a sovereign electorate behind me, and I have a bankrupt country. When your banks go bankrupt you bail them out. When your businesses go bankrupt you write off their debts and let them start again. Do the same to me. Your banks have lent my country crazy sums of money, way beyond the bounds of caution or common sense. Now you honestly think you will get it back. You can’t. Read my lips, look at my jeans, feel my stubble. You can’t. Get real.
Europe just now needs the shock of Varoufakis’s livery. It needs to be jolted out of any belief that Greeks can be made to return mostly Germany’s reckless loans by being plunged into perpetual penury. We know this is not possible. It is the economics of Little Dorrit, with Greece in the Marshalsea prison. It is exactly the mistake Europe made, ironically in handling Germany, over war reparations in 1919. Look where that led.
The eurozone, fashioned as a deutschmark zone, was a disaster waiting to happen, and not just for its poorer members. That disaster has happened.
Greece, and now all of Europe, are suffering because Europe is still being run by and for bankers who simply want their money back. This cannot continue, and Greece’s recent election is a golden opportunity to snap out of it. With luck Spain will follow and perhaps Italy, until the eurozone shrinks to a size capable of being responsibly managed.
Meanwhile Greece has a finance minister who looks like a normal human being. That is a start.
source »

Sashaying up the Downing Street catwalk like a meeting with the Chancellor was meerly an after-thought following a big night on the London tiles, Greece‘s rockstar new finance minister greeted a geekily-beaming George Osborne.
Syriza’s Yanis Varoufakis secured backing from France for his country’s bid to renegotiate its debt during discussions in Paris yesterday, where he began a whistle-stop tour, flying economy, meeting European counterparts. But German chancellor Angela Merkel has made it clear she will not allow Greece’s debts to be cancelled, insisting substantial cuts have already been made.
It was unlikely to be a meeting of minds the Government has made it clear it believes that Greece must honour its international commitments. David Cameron has offered to send British experts to help sort out Greece’s lamentable rate of tax collection, although it’s safe to say that is not exactly what Varoufakis is looking for.
Still, Osborne came out to hear what the new leftist finance minister had to say.

7 Things To Know About Yanis Varoufakis

As opposed to the History major George Osborne, Yanis does have the credentials the Greeks deserve to be served with…

He knows his economics…

Varoufakis worked as a visiting professor at both of the University of Athens and the University of Texas. The 53 year old went on to co-author “A Modest Proposal for Resolving the Eurozone Crisis” while at Texas, along with prominent left-wing economist James Galbraith. He knows the value of sleep

Writing on HuffPost last year, Varoudakis took issue with former Tory premier Margaret Thatcher for portraying sleep as a form of inefficiency.
He wrote: “It did much to establish the ‘hamsters-on-a-treadmill’ environment in government, in the City of London, in the corporations…quantity came to trump quality on every turn. It would not stretch credulity too far to say that the vast pyramids of bad quality assets, which crashed and burned in 2008, had their origins, at least in some small part, in this cultural shift.” He has a way with words…

As he demonstrated speaking to Channel 4’s John Snow this week (From 2m55), insisting that Greece would not pursue a “chicken game” with Brussels. He has previously compared austerity measures to “fiscal waterboarding“.


Will he turn up to international summits in a tie?

And being in government won’t stop him blogging…

Varoufakis revealed that he had been advised to close down his blog, but chose to ignore their advice.
He wrote on his blog, “The time to put up or shut up has, I have been told, arrived. My plan is to defy such advice. To continue blogging here even though it is normally considered irresponsible for a Finance Minister to indulge in such crass forms of communication. So, keep watching this space!”