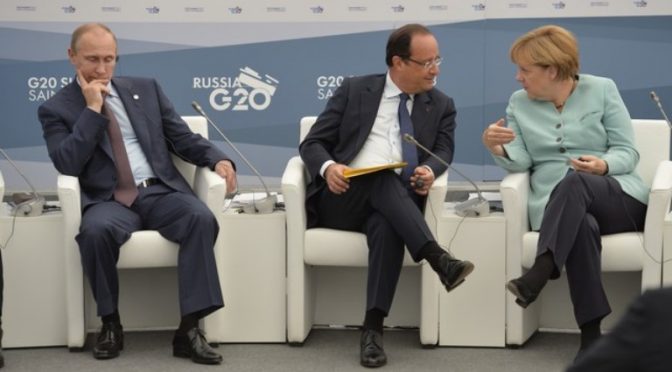 There’s an interesting report aired on CNN the other day. Obama is said to be considering beefing up “pro-US troops” in Ukraine by sending in lethal support.

Proxy wars are fought and supported covertly when possible. Is this CNN’s way of drum beating for a bigger war?
Do the CNN executives know of an agreement between Kremlin and Pentagon that the former can have its way with Saudi Arabia and Ukraine, as Fulford reported?
Do these CNN executives and their benefactors prefer an escalation rather than a peaceful resolution to the Ukrainian conflict?
We, however, would like to believe that the US is only bluffing when it said it might supply Ukraine with lethal weapons. Afterall, these military supports don’t come as entirely free of charge, and Ukraine is in no position to pay for it anytime soon.
The oil companies do have pending projects on the area. They are one of the vultures behind this move to acquire Ukraine by all means.
Another report is saying Putin has warned Merkel and Hollande that he won’t blink as far as the possibility of US arming of Ukraine is concern.

Social media is abuzz after CNN labeled Ukrainian forces involved in Kiev’s deadly military operation in the country’s southeast as “pro-US troops.” Online comments are calling it a Freudian slip, claiming it unmasks the true agenda behind the conflict.
The headline during CNN’s Monday segment, dedicated to talks between Barack Obama and German Chancellor Angela Merkel on the resolution of the Ukraine crisis, read: “Obama considers arming pro-US troops.”

READ MORE: Mission improbable: Merkel visits US to sell Ukraine peace plan
It was referring to the US president’s request to his team to consider the possibility of supplying lethal defense weapons to the Ukrainian government.
continue reading »

February 09, 19:47 UTC+3
US arms supplies to Ukraine might trigger an arms race bound to end up in Ukraine’s complete military defeat, says a Ukrainian political expert © AP Photo/Sergei Chuzavkov
KIEV, February 9. /TASS/. The United States’ statements on possible supplies of lethal weapons to Ukraine are mere bluffing seeking to exert pressure on Russian President Vladimir Putin, a Ukrainian political expert told TASS on Monday.
“It is just a kind of poker bidding up, it is a bluff, an attempt to press Putin to be more tractable,” Ruslan Bortnik, the director of the Ukrainian Institute of Policy Analysis and Management, said, commenting on statements by US top-ranking officials on the necessity to supply arms to Ukraine.
Bortnik said he is sure the Americans will not begin weapons supplies to Ukraine. “Of course not,” he said when asked. “It might trigger an arms race bound to end up in Ukraine’s complete military defeat,” he added.
“Supplies of such arms can be blocked in the United States, like in Germany. American generals are wise enough to allow for the logic of developments,” he noted.
continue reading »

A new Ministry of Foreign Affairs (MoFA) report prepared for the planned ‘Normandy Four’ meeting that may be held in the Belarus capital of Minsk as early as Wednesday, with President Putin, Ukrainian President Petro Poroshenko, German Chancellor Angela Merkel and French President Francois Hollande, warns that should this effort fail, “total war” remains the Federations only option to resolve the Ukraine crisis.
According to this report, during his 5-hour meeting Friday with Merkel and Hollande, Putin privately warned his European counterparts that he would not allow the Obama regime to arm the fascist-aligned Ukrainian government, and should the US attempt to do so in spite of the Federations warning, “total war” within a few weeks would be the result.
During a visit to Sochi on the Black Sea yesterday, this report continues, Putin further publically warned the Obama regime against their reckless actions by stating:
“There is an attempt to perturb the existing world order… with one incontestable leader [Obama] who wants to remain as such thinking he is allowed everything while others are only allowed what he allows and only in his interests. This world order will never suit Russia.”
Putin’s grim warning of “total war”, this report notes, was heeded by Merkel who warned her Western counterparts yesterday not to try to scare Russia’s leader, and by Hollande who stated, “If we don’t find not just a compromise but a lasting peace agreement, we know perfectly well what the scenario will be. It has a name, its called war.”
Adding to Putin’s growing anger against the Obama regime over the Ukrainian war, this report says, was a German intelligence document provided to him by Merkel at Friday’s meeting estimating the true total of deaths in this conflict at 50,000, ten times the officially announced figure which has repeatedly been cited in the propaganda-filled Western press.
However, as this report despairingly notes, while the current Merkel-Hollande peace bid “is the last chance to avoid all-out war” as fighting intensifies in Ukraine, the Obama regime is intent upon making it worse as US Vice President Joe Biden yesterday vowed to arm the Ukrainian government to defend itself.
Not being told to the American people about their government’s deadly plan though, this report warns, is that if the use of US weapons in the killing of ethnic Russians continues, the Kremlin has stated that it would support a large-scale military offensive from the east that would involve “taking Kiev.”
Necessitating the need for “total war” in an attempt to stop the Ukrainian conflict, this report states, is predicated upon the fact that along with ethnic Russians being under attack by Obama regime supported forces, this conflict also involves Federation citizens who have poured across the border by the thousands into this war to protect their families and relatives.
As Ukrainian President Poroshenko has lost control of the military situation in eastern Ukraine at the same time his nations currency has collapsed and his government has gone broke, this report further warns, nearly 100,000 rebel forces are currently massing for what in all terms would be the final battle that would nearly totally destroy what’s left of the Ukrainian army.
Important to note, MoFA experts in this report say, is that Ukraine currently has only around 41,000 regular combat troops plus perhaps 20,000 Ukrainian irregulars who joined volunteer battalions to fight against these nearly 100,000 rebel forces, and has lost a staggering 220 tanks, or a quarter of its total, and more than 480 armored vehicles through August of last year through combat, breakdown or capture by the rebel forces.
Also to note, this report says, is that by the beginning of this war in March 2014, Ukraine had just 6,000 troops ready for combat and only a sixth of its aircraft and anti-aircraft systems were functional and only four of the Ukrainian navy’s vessels were combat-ready prior to the conflict, and to make matters worse for them, at least 16,000 former Ukrainian military personnel in Crimea defected to the Russian armed forces when Russia annexed the territory in March.
The rest of Ukraine’s 100,000 or so troops and equipment weren’t ready for combat, this report shockingly continues, so in order to keep their forces fighting, Kiev established what are called “barrier squads” and sent them to the front lines to fire on any of their soldiers who attempted to retreat.
With US Special Forces troops already filmed being a part of this conflict, and US General. Ben Hodges, Commander of the US Army in Europe, handing out medals to wounded Ukrainian soldiers, this report also warns, the Federation is already in a de facto war with the Obama regime.
As to the outcome of these latest dire events it should be noted, and as we had previously reported on, Putin’s “Shock of March” battle plan remains a grave option on this bloodied table of war that may soon engulf us all.
February 8, 2015 © EU and US all rights reserved. Permission to use this report in its entirety is granted under the condition it is linked back to its original source at WhatDoesItMean.Com. Freebase content licensed under CC-BY and GFDL.