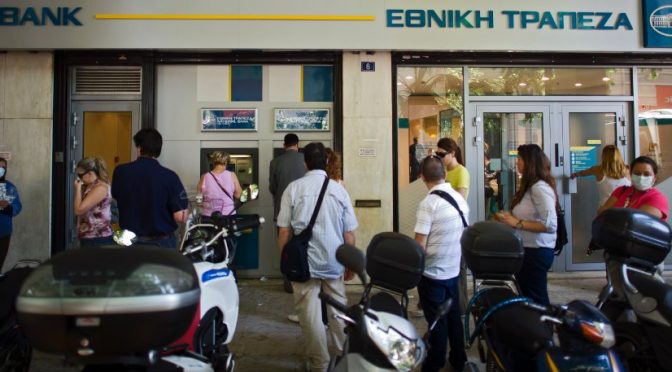 Tomorrow is Decision Day for Greece. Will it stay with the European Union or cement its crumbling economy with BRICS?

Greece is asking for a debt haircut, or a “longer bridge,” so it can ease out, as it is already doing now, the suffering of its people. But an outright debt haircut is a non-starter for Germany, and so Greece will have no choice but to look elsewhere.
Their so-called Plan B, or “Pivot to BRICS,” is already rolling.
When it happens, as all signs are pointing towards that direction, the Eurozone will fall like dominoes.


Greece warns that if informal EU leader Germany remains rigid on granting Athens a new deal, it will seek assistance elsewhere. The US, Russia and China are the possible candidates.
READ MORE: Greek PM says troika bailout failed, will not ask for extension
The warning came from new Greek Defense Minister Panos Kammenos, who assumed office after the populist Syriza party won a general election in January and its leader Alexis Tsipras took over as prime minister from Antonis Samaras.
“What we want is a deal. But if there is no deal – hopefully (there will be) – and if we see that Germany remains rigid and wants to blow apart Europe, then we have the obligation to go to Plan B. Plan B is to get funding from another source,” Kammenos told Greek television on an overnight show running into early Tuesday, as reported by Reuters.
“It could be the United States at best, it could be Russia, it could be China or other countries,” he said.
Syriza gained a plurality of votes thanks to its EU-skeptic platform and a promise to oppose austerity measures imposed on the ailing Mediterranean nation by the “Troika” of foreign creditors in exchange for a debt bailout.
Kammenos is not a member of Syriza, but comes from the Independent Greeks, an ally in the coalition government. In the program he said his party and Syriza had converging views on “80 percent of issues” and that way of dealing with the debt is among those they agree on.
READ MORE: Greeks take to the streets to support government’s anti-austerity stance
The new Greek cabinet wants part of the national debt written off, a demand that Germany has rejected. Athens also opposes some of Brussels’ policies, most notably the anti-Russian sanctions over the Ukrainian crisis, which led to a painful trade war between Russia and Europe.
In the wake of Syriza’s victory, Moscow indicated that it may consider offering a loan to Greece.
READ MORE: Russia might bailout Greece – finance minister
Greek Foreign Minister Nikos Kotzias will visit Moscow on Wednesday to meet his Russian counterpart Sergey Lavrov, the Russian embassy in Athens reported on Tuesday.
[soundcloud url=”https://api.soundcloud.com/tracks/190267043″ params=”color=ff9900″ width=”100%” height=”166″ iframe=”true” /]
source »

Submitted by Tyler Durden on 02/10/2015 22:35 -0500
There was much confusion earlier today surrounding the immediate fate of Greece, when first thing in the morning Bloomberg reported a rumor that the European Commission would grant Greece a 6 month extension, sending futures surging, and then several hours later, futures surged some more when Germany’s finance minister crushed the first rumor, saying “it was wrong” and that without a Greek program, it was “all over.”
Which means that the only relevant overnight news when stripping away the endless trial balloons and BS that Europe covers itself with before every important economic summit, was what the Greek defense minister said as reported by Reuters, namely that Greece now has a Plan B if Europe refuses to budge – the same “plan” we hinted last month:
Greek Defence Minister Panos Kammenos said that if Greece failed to get a new debt agreement with the euro zone, it could always look elsewhere for help.

“What we want is a deal. But if there is no deal – hopefully (there will be) – and if we see that Germany remains rigid and wants to blow apart Europe, then we have the obligation to go to Plan B. Plan B is to get funding from another source,” he told Greek television show that ran in to early Tuesday. “It could the United States at best, it could be Russia, it could be China or other countries,” he said.
In other words, a threat that if Europe doesn’t need Greece (as the EuroStoxx50 and S&P500 are so giddy to confirm), then Greece also doesn’t need Europe for the only reason it has needed it for the past 6 years: to provide funding.
Not only that, but Greece would also promptly default on debt held by the ECB and launch the contagion that UBS described earlier, with the only question being how quick it would spread across what is left of the European “Union” and Eurozone.
Western observers were certainly not amused at the Greek comments. As Newsweek reported, Dr Jonathan Eyal from defence and security think tank the Royal United Services Institute (RUSI) called Kammenos’ statement an “unbecoming threat from a NATO member state.”
He told Newsweek: “It’s another reminder that the Greeks have never offered the kind of solidarity to Europe that Europe has shown to Greece.”
“It’s very obvious the Russians have an opportunity to subsidise a country that can stop a consensus that is required to keep up sanctions on Russia. It’s very grave indeed. The repercussions of this could be quite serious depending on what Greece do in return.”
This would lead to the unthinkable: should Greece pivot to Russia it would permit Putin to build Russian bases on NATO soil!
Eyal was not impressed: “It’s possible although it’s a farfetched. If you were to see Russian bases in NATO territory it would obviously raise serious concerns.” Or, as Putin would call it, victory. Of course, just because on the surface this possibility appears “farfetched” is why the western punditry is refusing to completely ignore it.
We bring this all up because as everyone by now knows, tomorrow night is the emergency Eurogroup meeting when, among other things, Greece will ask for a bridging loan to cover funding needs until August, something which Germany has already suggested is a non-starter, and yet hopes remain that somehow a compromise will emerge. Furthermore, while there are future meetings in the immediate future, as a reminder Europe’s 10 day ultimatum to approve the bailout program is ticking, and runs out just in time for the next meeting, after which all bets will be off. So for all intents and purposes, tomorrow is when Greece must get some much needed clarity on what happens next: whether Europe is ready to compromise or, if not, consider Plan B.
And while most are aware of all of the above, it is the Plan B aspect which few have considered. It is here that as Kathimerini reported yesterday, things are indeed getting serious, to the point where one may be forced to even think about the “unthinkable.”
As Greek Kathimerini reported, “Greece’s Foreign Minister Nikolaos Kotzias is to visit Moscow on Wednesday to hold talks with his Russian counterpart Sergei Lavrov, Russia’s Interfax and TASS news agencies reported on Monday citing a source in the Russian Foreign Ministry.”
In other words, at precisely the same time as the FinMin is in Brussels discussing the fate, or lack thereof, of Greece in the Eurozone, the new Greek foreign minister will be in the Kremlin, getting instant updates from Brussels and perhaps discussing the fate of Greece in the Eurasian Economic Union.
Which means that as soon as tomorrow night, if the Eurozone is indeed intent on kicking Greece out as some have suggested, we may know if not Russia but Europe is who suddenly becomes more “isolated”, as one of its current member flips allegiance to the man most hated by the entire “developed” world.
Or put in the simplest of terms, tomorrow Greece will decide: Europe, or Russia.
source »

How Fast Would Contagion Spread If Greece Exits The Eurozone

Submitted by Tyler Durden on 02/10/2015 14:41 -0500
“In the case of the euro area it seems unlikely that the current, incomplete banking union and non-existent fiscal union would be sufficient to prevent the contagion of bank runs spreading to other countries in the wake of a Greek exit from the euro. The starting point is that other countries are at risk of departure in response to a Greek exit. If the political status quo is maintained, it has to be thought likely, maybe probable, that Greece will not be alone in exiting the euro. It would be irrational for depositors to gamble their life savings if they believe that there is even a 5% chance that their country could leave the Euro. A 5% chance of a 60% loss in the value of one’s savings (assuming a Greek parallel) would make the effort of withdrawing or transferring funds worthwhile. As with the deposit withdrawal within Greece, once the first spark of fear has been ignited the conflagration of contagion is likely to spread very rapidly.”
continue reading »

One thought on “Greece D-Day: Russia or Europe?”