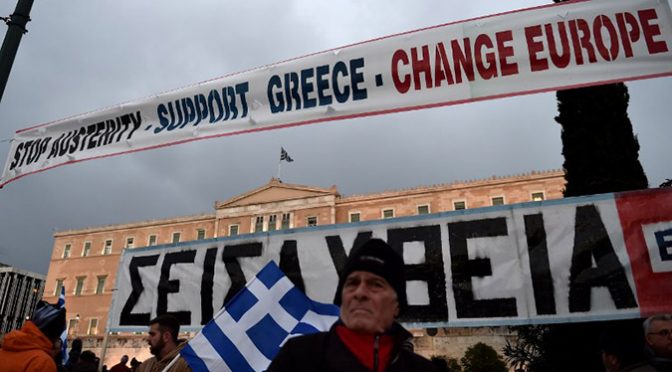 This is just the beginning of the end for globalist bankers, and they know it.
Eurogroup and Greece negotiations will continue on Monday but already a sign is emerging that the whole world won’t be bowing down to the whims of the 1% anymore.

They are showing solidarity in one way or another to the plight of the Greeks, and its EU imposed anti-austerity measures that favors heavily on Vulture Funds.
The “trickle down effect”, which is what every brainwashed economist today would love to chew and spit on you with, is not and will not be happening. It’s just a myth anchored on our presumption that the authorities are working for the Common Good, to make us wait for something that is truly not forthcoming.
The fundamental truth that we need to remind ourselves at all times is:

Nothing trickles down from Organized BloodSuckers.

The parasitical minority of this planet must be neutralized and fully eliminated for the survival of the abused majority. 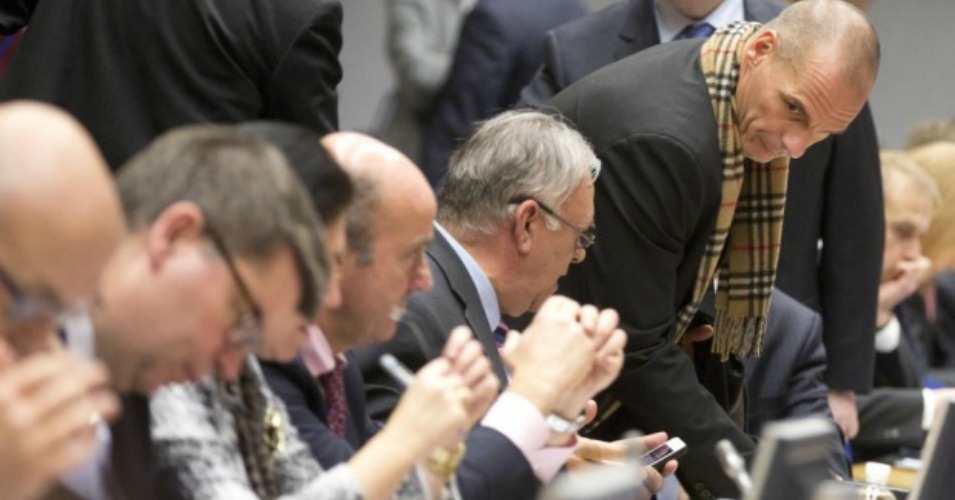 After weeks of heightened rhetoric and promises regarding Greece’s economic future, the country’s new leftist Syriza government on Wednesday at last met with European Union finance ministers in Brussels to discuss the plan to end the EU lenders’ punishing austerity regime.
Greek Prime Minister Alexis Tsipras and Financial Minister Yanis Varoufakis are attending an emergency meeting with officials from the so-called Troika—composed of the European Central Bank (ECB), the European Commission, and the International Monetary Fund—to introduce Syriza’s plan to cancel the deeply unpopular bailout program and, among other measures, tie the country’s debt repayments with future economic growth.
The newly elected Syriza government has found wide support among its countrymen. On Tuesday, the Greek parliament voted to back Tsipras’ 10-point anti-austerity plan. And as the talks commenced Wednesday, thousands of citizens physically demonstrated their approval with rallies across the country.

While Eurozone finance ministers were negotiating Greece’s future, a rush of solidarity for Greece spread around the globe… Thousands of citizens gathered in the freezing cold, warmed by their collective strength and the “Breath of Dignity”. Sources speak of 10,000 people who went to the pro-government rally organized through social media to show their support for the Greek government’s efforts at the Eurogroup meeting on Wednesday. The event, titled “Breath of Dignity”, saw thousands carrying anti-austerity banners. “Merkel leave the E.U.” was one of the slogans shouted in a rally that led to the German Embassy.

Government spokesman Gavriil Sakellaridis said that 10 mln Greek citizens are at Eurogroup and the EU summit, not just Greek officials. “Hope sent away fear,” he said.

On his Twitter account, Prime Minister Alexis Tsipras wrote: “In cities around Greece and Europe, the people are battling for negotiations!”

In Thesaloniki, thousands gathered outside the White Tower, closing downt Nikis Avenue, on the coast around the White Tower, causing traffic jams in the surrounding streets.
Hundreds of citizens also gathered at the square of Tripolis, Perivolakia at Corinth, the central square of Kalamata and other cities around the Peloponnese.

At Heraklion Crete they gathered at Freedom (Eleftheria) Square despite the chill and rain that couldn’t hold back the people of Crete from showing their support. Hundreds of citizens gathered at Chania, Crete, at the Municipal Market Square. Workers of the Greek national radio network (ERA) asked for the reoperation of the Greek Radio and Television Network (ERT).
Cities of Epirus also were flooded with people. “We are not being threatened! We will not back down! We are WINNING!” they wrote on banners.

Cyprus showed its support to Greeks with its own pro-Greek rally that began at 6 p.m., outside the House of Europe in Nicosia. The anti-austerity rally in Cyprus was organized by the Greek Citizens of Cyprus Solidarity Network that was created to support 40,000 Greek immigrants to Cyprus.

Thousands of Europeans also took to the streets with separate pro-Greek rallies in Amsterdam, Brussels, London, Edinburgh, Copenhagen, Lausanne, Rome, Lisbon, Berlin, paris, Vienna, Budapest, Madrid, Helsinki and other cities at the same time that EU finance ministers were debating Greece’s debt on Wednesday.
“Scotland is beside Greece,” noted the organizers’ website that called protestors to gather outside the Parliament of Edinburgh.
In Denmark, they said “No to blackmailing Europeans in Greece. We are on Greece’s side in the battle against austerity.”

Solidarity for Greece was felt as far as Brazil and other rallies were held in New York where humanitarian, cultural, political and unionist organizations gathered outside the EU Representation’s office and the United Nations Organization. One thought on “Greek Anti-Austerity Protests Spreading Beyond Eurozone”