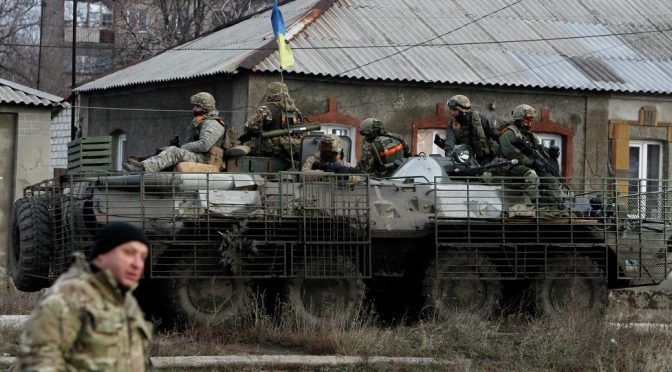 This had happened before. Last year, Poroshenko abandoned his men at the frontlines and were forced to cross the border into Russia.
Probably, the only reason why Poroshenko signed the Minsk Peace Plan 2.0 was so he could avail of the $17.5 Billion IMF assistance for Ukraine.

It doesn’t matter if this is the kind of uncivilized leadership that is being appointed in Ukraine, for as long as it serves the intended purpose of the likes of Biden and the Oiligarchy, to hell with international norms.
These Cabalist sponsors will be the actual recipients of that loan. Its military draftees are all dispensable.
That’s the United States upholding democracy and freedom beyond its own backyard. Behold!

As Debaltseve is not mentioned in the Minsk agreement and that means that Kiev “simply betrayed” 5,000 Ukrainian armed forces’ soldiers.

© REUTERS/ Gleb Garanich
Putin Instructs Military Experts to Determine if Kiev Forces Encircled in Debaltseve
DONETSK (Sputnik) – The forces of the Donetsk People’s Republic (DPR) will cease fire everywhere except for inner regions of the self-proclaimed republic, any attempts of Kiev soldiers to break out the encirclement at the town of Debaltseve will be stopped, the DPR head said Saturday.”We are ceasing fire everywhere but inner regions of DPR. Any attempt of [Kiev soldiers] to leave the ‘cauldron’ [Debaltseve encirclement] will be stopped. I have already given this order,” Alexander Zakharchenko told reporters.
“There is not a single word about Debaltseve in [Minsk] agreements. That means that Ukraine simply betrayed 5,000 people in the ‘cauldron’,” Zakharchenko said.
Debaltseve, one of Ukraine’s biggest railroad junctions, has become the site of intense fighting between Kiev and southeastern Ukrainian pro-independence fighters. Donbas Forces Ready to Cease Fire in Debaltseve Area Immediately
Earlier in the day, deputy head of the DPR forces Eduard Basurin stated that the republic was not planning to let Kiev soldiers trapped in Debaltseve leave the town until they surrender. According to Basurin, Kiev told soldiers to not surrender, as they would be taken out of Debaltseve in rotations or using OSCE help after February 15. Kiev denies claims that its soldiers are encircled in Debaltsevo.
During Thursday’s Minsk talks, the leaders of Kiev and the breakaway republics of Donetsk and Luhansk managed to sign a deal, stipulating a ceasefire from Saturday night, prisoner swaps, weaponry withdrawal and constitutional changes in Ukraine.
Donetsk forces announced readiness to cease fire and allow surrounded Kiev soldiers to leave the Debaltseve area “on respectful conditions.”
An earlier ceasefire agreement reached by the warring sides last September broke down, with clashes intensifying in recent weeks. Debaltseve, one of Ukraine’s biggest railroad junctions, has become the site of intense fighting. According to reports, up to 10,000 Ukrainian troops remain surrounded after attempting to recapture the contested town.
source: http://sputniknews.com/europe/20150214/1018270783.html#ixzz3RjC2vPwo

The Rumble in Rada: Ukrainian Lawmakers Know How to Throw Punches (VIDEO) 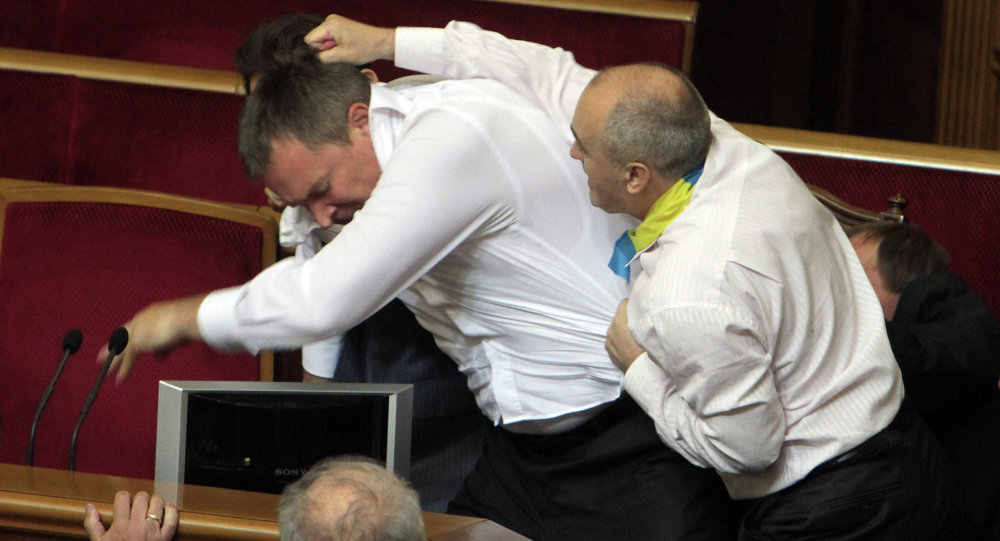 Martial art training and fight experience seem to be necessary requirements to get into Ukraine’s parliament, as it is extremely hard to get one’s point across, without throwing the right cross. Below is a compilation of most exciting fights in the Verkhovna Rada over the past few years.

Ukrainian officials may never end up winning a UFC championship belt, but they sure know how to pack a punch or two.
When things get heated in the Ukrainian parliament, lawmakers are quick to exchange punches and go for wrestling-style takedowns to settle their political differences. Below is a list of most exciting fist fights that took place in the Verkhovna Rada over the past few years.
The most recent incident took place this week, when Yegor Sobolev, a member of the Self-Reliance Party, squared up against Vadim Ivchenko from the Fatherland Party. The two had quite a fight. Ivchenko, dressed in a grey suit, showcased good boxing skills, bobbing and weaving while throwing loopy counter-punches over his opponent’s hands before flooring Sobolev with a perfectly-timed right cross.

Oleh Lyashko, the leader of Ukraine’s Radical Party, was knocked down following a heated discussion with another politician in a hallway of the Verkhovna Rada last year. He should have known better to keep his hands up to protect his chin when insulting a bigger man.

When one-on-one fights failed to settle arguments, situations got out of control and massive brawls broke out in the past. Wild, free-for-all fights, with the use of chairs, microphones and bottles occurred in Ukraine’s parliament on several occasions.

Ukrainian MPs are so tough that they will not back down from a fight with anybody, including Vitali Klitschko, a former boxing champion widely recognized as one of the greatest heavyweight boxers on the planet. Klitschko, who is the current mayor of Kiev, used his boxing skills to settle disputes in the Verkhovna Rada.

[youtube https://www.youtube.com/watch?v=jPiRV7IRHAw]
From the way it looks, martial art training and fight experience are necessary requirements to get into Ukraine’s parliament. Otherwise, it would be extremely hard to get your point across, without throwing a right cross.
source: http://sputniknews.com/art_living/20150214/1018267520.html#ixzz3RjCHpROX