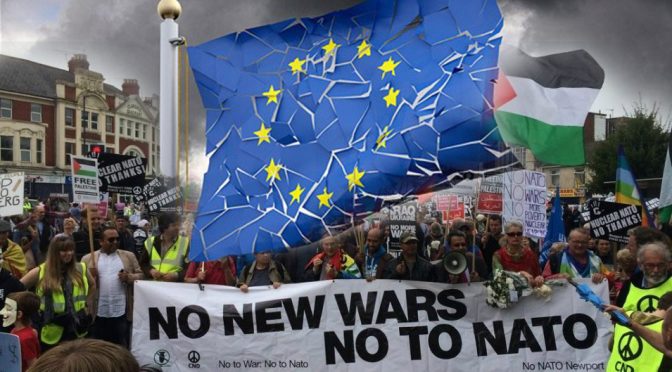 Different sources, different persuasions have all predicted that the European Union will disintegrate and NATO will fall apart.

The predictions below have been made from 2011 up to the present.

So We’re Agreed: The European Union Is Falling Apart

Margaret Bogenrief, Beautifully Complex
Sep. 6, 2011, 4:00 AM
I’ve said/written before, and I’ll say/write it again: the European Union should – and soon will – be no more. As the Wall Street Journal reports, however,  in EU Van Rompuy: Credibility Of Euro Zone At Stake Over Greece, the financial and political world(s) begs to differ– or is at least waffling in deciphering and understanding the clear warning signs that the European Union is NOT a sustainable economic and political entity (and will soon be forced to undergo, at the very least, a severe political and economic restructuring).
Read more: http://www.businessinsider.com/so-were-agreed-the-european-union-is-falling-apart-2011-9#ixzz3SBZeovF4

The European Union or European community or European economic community has been expanding at a very rapid pace. Much too rapid and it has never digested those various ways of enlargement it took in countries for political reasons to protect democracy into the East, into Eastern European former Communist countries, but these countries by no means ready not economically, not politically, not in many other terms. Dr. Armand Clesse, director of the Luxemburg Institute for European and International Studies expressed with us his opinion on the future of the EU.
Take for example Rumania and Bulgaria – but look what has happened in the last 20-24 years in those countries, 23 years. There hasn’t been any substantive progress, corruption maybe even higher than under the previous system. You have to understand this policy, this manner to become larger, but it also means the weakening in fact of the Union politically and economically. So it’s a counterproductive self-defeating policy, it seems to be somewhat even desperate. Because the EU feels that this is not much to hold it together, it is expanding while proclaiming its will to make it stronger when in fact it is dissolving.
Read more: http://sputniknews.com/voiceofrussia/2013_10_25/The-EU-is-slowly-falling-apart-5306/

The billionaire financier says in its tepid response to Russia’s Crimea land grab, the EU flubbed a key chance to breathe new life into the stale union.
George Soros, one of the world’s leading investors, has warned that the European Union is in danger of falling apart if it fails to confront Vladimir Putin’s naked aggression in Ukraine.
http://www.thedailybeast.com/articles/2014/03/14/george-soros-predicts-ukraine-could-ruin-the-eu.html

The centre is falling apart across Europe

For decades, European nations have been ruled by two-party systems. Not any more: fragmentation is the new normal as the economic crisis has led to a surge in popular, maverick parties that appeal to the young


Wednesday morning in Brussels and Beppe Grillo has brought his anti-establishment roadshow to the European parliament. The committee room is packed, standing room only for the former standup act.
Once he gets going, Grillo resembles a force of nature. He declines to sit on the parliamentary rostrum alongside the other participants. Instead he prowls the floor, spitting out a staccato torrent of abuse and grievance, unscripted, unstoppable, laugh-a-minute.
“I’m a bit over the top,” Grillo admits when he first pauses to draw breath after half an hour. “Maybe I should stop here.”
Grillo is the Mr Angry of Italian and, increasingly, European politics. His Five Star Movement is running a consistent second in the opinion polls at around 20% behind the modernising centre-left of the Democratic Centre of prime minister Matteo Renzi.
If Grillo is hammering on the establishment’s doors, across Europe upstarts, populists, mavericks, iconoclasts and grassroots movements are performing even more strongly, radically changing the face of politics, consigning 20th-century bipartisan systems to the history books, and making it ever trickier to construct stable governing majorities.
http://www.theguardian.com/world/2014/nov/16/europes-centre-cannot-hold 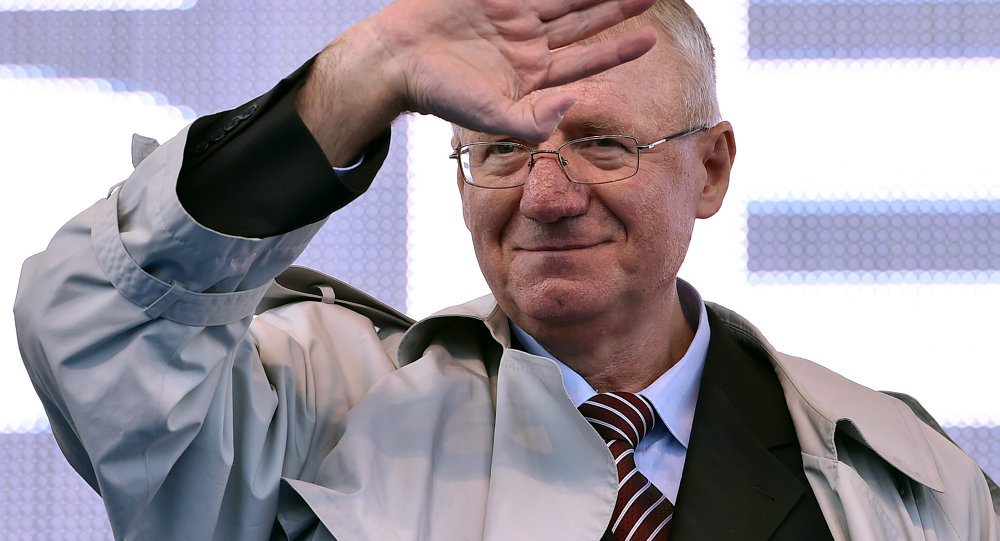 Serbia will never enter the EU because the Union will fall apart before it happens, a prominent Serbian politician believes.
© Sputnik/ Aleksander Natruskin
Serbia Rules Out Joining Sanctions Against Russia – Ambassador
According to Vojislav Seselj, a prominent Serbian politician, writer and lawyer, Serbia will never join the EU because the organization will collapse first.
Seselj, who is head of the Serbian Radical Party, made the remarks during his interview with ParlamentníListу.cz, which was released on Wednesday.
“I think that Serbia will never join the EU, because the EU will see its disintegration earlier. Secondly, we will do our best in order to topple this regime. If the Serbian Radical Party comes to power in Serbia, we will immediately stop the country’s integration into the EU,” Seselj said.
He added that Serbia could instead focus on bolstering ties with Russia.
“We see the prospect in integrating relations with Russia, which is full of energy and continues to gather strength. This is something that scared the Americans and other Western countries, which is why they decided to weaken the Kremlin by imposing sanctions, blockades and other things. They will achieve nothing because Russia is a Slavic country, which has no such ambitions as the United States wishing to rule the world, conquer and subjugate,” he said.
Separately, Seselj touched upon anti-Russian sanctions, which he claimed rode roughshod over the EU’s economic interests.
“Europe has lost an incredibly large market as the result of anti-Russian sanctions. As for Russia, it will first face problems, but it will then start to develop its own food, electronic and automotive industries so as to shore up production. Russia will seek to develop cooperation with other countries, while Europe is shooting itself in the leg,” Seselj concluded.
Although the Serbian Radical Party, which was founded by Seselj in 1991, holds no seats in Serbia’s National Assembly, it was a major force in the country’s legislature until a 2008 schism in the party over attitudes towards the European Union resulted in the creation of the Serbian Progressive Party, which currently controls the legislature.
Read more: http://sputniknews.com/europe/20150218/1018423233.html#ixzz3SBaBNM1D

Astrologer: EU will cease to exist, NATO will fall apart, world on verge of WW3

Famous Russian astrologer, Pavel Globa, had in 2009. predicted plane crashes that rocked the public in recent days, estimating the probability of the disasters. He also predicted that 2014 will be the year of increased risk, and humanity on the verge of the third world war, writes “Alo!”.
He said that in July and August there will be a wave of plane crashes, which is why he advised everyone to refrain from flying in this period. In December and January 2015 danger of earthquakes will increase.
Otherwise, the daily writes, this is astrologist who in the early eighties of the last century predicted that the Soviet Union will quickly fall apart and that the streets of Moscow will in the summer of 1991 be flooded with tanks. He predicted the disintegration of Ukraine in 2014 and claims that 85 percent of his predictions came true.
In 2009 he also predicted that the economic crisis, which will last until 2020, will redraw the geopolitical map of the world and dramatically change the distribution of power. According to Globa, The United States await hard times and Barack Obama will have the unenviable fate.
When it comes to the future of the EU, according to him, there will be several alliances instead of one, and the EU will, as an alliance, eventually live only on paper. NATO will also fall apart. Although it will grow stronger for a while, by the end of the crisis it will cease to exist. In 2014, he said, humanity will be close to the third world war.
As for the economy, US dollar will have the most difficult period from 2017 until 2018. After 2016, prices of oil will begin to increase, which will help Russia to come out of the crisis as the world leader.
Major changes in Russia will, as he claims, happen from 2014 – 2016 and will be associated with large earthquakes. The “third wave” will come in 2017 and will last until 2020, and Globa said he is very afraid of it. The world will recover from the crisis, which will be named as “the second great depression”, at the end of 2020. In 30 post-crisis years, by 2050, Russia will go through rebirth. In 2020 or 2021, a powerful new person, called “rider on a white horse”, will take over the power. He will not rule for a long time, but will leave a tremendous mark.
http://inserbia.info/today/2014/08/astrologer-eu-will-cease-to-exist-nato-will-fall-apart-world-on-verge-of-ww3/

One thought on “EU Will Cease to Exist, NATO Will Fall Apart”