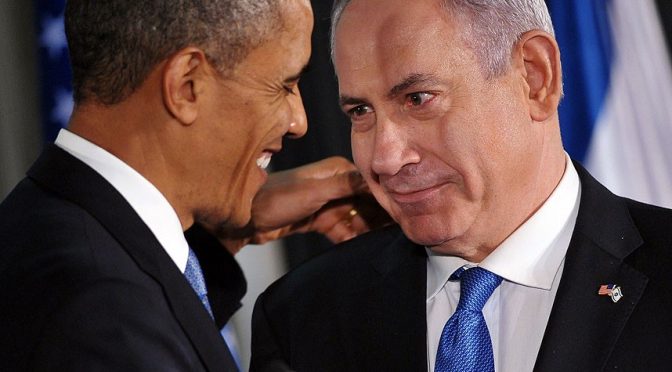 Since last year, the rift between Israel and the White House has become apparent with the latter calling the former “chickenshit”.
With the Republican dominated Congress, this rift has gotten worst with a congressional invitation to Netanyahu to continue justifying their mindless “war on terror” in the Middle East and elsewhere.
Obama has recently responded by leaking to the media the alleged 1980s report on the nuke violation Israel has committed which would disqualifies the latter from availing US military aid now amounting to at least $100 Billion.

Obama should improve security to avoid a Kennedy fate: Journalist

An American investigative journalist says it is good that US President Barack Obama is standing up to Israel but he should improve his security to avoid a John F. Kennedy fate.
In a phone interview with Press TV on Wednesday, Wayne Madsen said that the last US president who confronted the Zionist regime was assassinated on November 22, 1963.
“The relationship between [Israeli Prime Minister Benjamin] Netanyahu and Obama is quite likely the worst we have seen between a US president and an Israeli prime minster since President John F. Kennedy told then Israeli Prime Minister David Ben-Gurion that Israel would never have nuclear weapons as long as he is president,” Madsen said.
“Of course, days after his assassination, President [Lyndon B.] Johnson reversed that policy and started to provide nuclear technology from the United States to Israel,” he stated.
He added that “by and large it’s healthy that [an] American president is standing up to the Israeli prime minister; however the last time that happened it was President Kennedy,” who was shot as he rode in an open car through in Dallas, Texas.

Although official inquiries have determined Lee Harvey Oswald, a former Marine Corps veteran, was responsible for the assassination, Kennedy’s murder is still shrouded in mystery. The 46-year-old president, who had been in office only for three years, is often ranked among the country’s most revered presidents.
Madsen said he hopes the US Secret Service, charged with protecting the president, has reformed itself enough to counter any threats Obama is facing from Israel. “I would just hope that the Secret Service has reformed itself enough to not let any threats made by certain individuals [get materialized]. You know, Israel has mastered the art of false flag attacks.”
“The issue is that anytime any world leader decides to confront Israel, or Israeli propaganda, they are immediately put in danger and that includes every one since Count Folke Bernadotte, the US-Middle East peace negotiator who was gunned down by Israeli terrorists in 1948, and Dag Hammarskjold who was… [a] mediator in the Middle East and others,” he noted.
He warned that “anytime any world leader confronts Israel they have to be prepared for any type of retaliation, whether it’s political or otherwise.”
“So I believe that President Obama has to be very, very concerned right now that the Israelis don’t try to do something to harm him physically or politically,” Madsen concluded.
SB/GJH