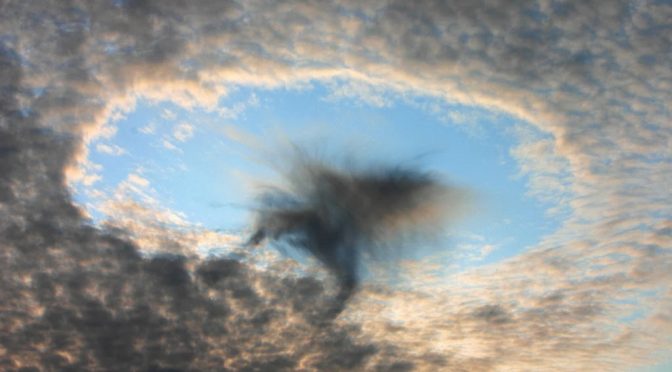 Mainstream discussion about weather weapons is starting with at least three themes.
First, the alleged CIA pan to explore the idea [as if they’re not using it already], and the possibility that Russia could be using it already causing abnormal weather patterns in the US.

The third theme is the possibility of using weather manipulation to correct “global warming”. Of course, global warming was a hoax from the very beginning. But there’s a need to interface with the mainstream mindset caught up with the lies of the 20th century.
But this third theme is wicked as it is being used to justify chemtrailing.


A senior US scientist has expressed concern that the intelligence services are funding climate change research to learn if new technologies could be used as potential weapons.
Alan Robock, a climate scientist at Rutgers University in New Jersey, has called on secretive government agencies to be open about their interest in radical work that explores how to alter the world’s climate.
Robock, who has contributed to reports for the intergovernmental panel on climate change (IPCC), uses computer models to study how stratospheric aerosols could cool the planet in the way massive volcanic eruptions do.
But he was worried about who would control such climate-altering technologies should they prove effective, he told the American Association for the Advancement of Science in San Jose.
Last week, the National Academy of Sciences published a two-volume report on different approaches to tackling climate change. One focused on means to remove carbon dioxide from the atmosphere, the other on ways to change clouds or the Earth’s surface to make them reflect more sunlight out to space.
The report concluded that while small-scale research projects were needed, the technologies were so far from being ready that reducing carbon emissions remained the most viable approach to curbing the worst extremes of climate change. A report by the Royal Society in 2009 made similar recommendations.
The $600,000 report was part-funded by the US intelligence services, but Robock said the CIA and other agencies had not fully explained their interest in the work.
“The CIA was a major funder of the National Academies report so that makes me really worried who is going to be in control,” he said. Other funders included Nasa, the US Department of Energy, and the National Oceanic and Atmospheric Administration.
The CIA established the Center on Climate Change and National Security in 2009, a decision that drew fierce criticism from some Republicans who viewed it as a distraction from more pressing terrorist concerns. The centre was closed down in 2012, but the agency said it would continue to monitor the humanitarian consequences of climate change and the impact on US economic security, albeit not from a dedicated office.
Robock said he became suspicious about the intelligence agencies’ involvement in climate change science after receiving a call from two men who claimed to be CIA consultants three years ago. “They said: ‘We are working for the CIA and we’d like to know if some other country was controlling our climate, would we be able to detect it?’ I think they were also thinking in the back of their minds: ‘If we wanted to control somebody else’s climate could they detect it?’”
continue reading » 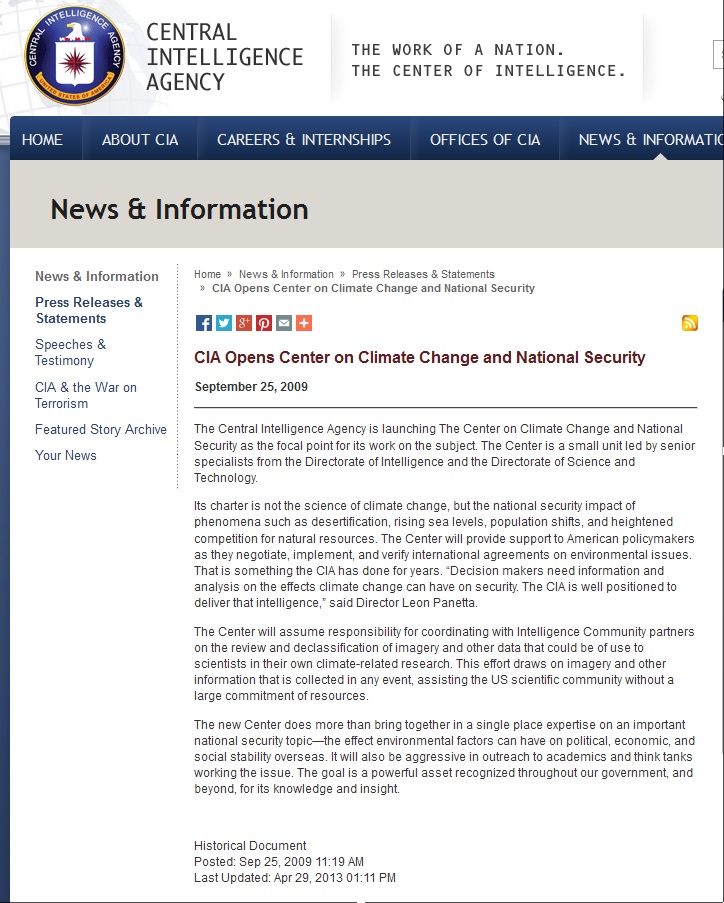 By Fiona Macrae, Science Correspondent In San Jose
Published: 00:10 GMT, 16 February 2015 | Updated: 09:11 GMT, 16 February 2015
If it seems like it never stops raining, blame the Russians. Or even the North Koreans.
CIA chiefs fear hostile nations are trying to manipulate the world’s weather, a conference heard.
A leading academic has told how he got a mysterious phone call asking whether foreign countries could be triggering droughts or flooding.
Read more: http://www.dailymail.co.uk/news/article-2954933/Can-Russia-control-weather-Climate-researcher-says-CIA-fears-hostile-nations-triggering-floods-droughts.html#ixzz3SAFmR2Xx

It is no substitute for efforts to reduce greenhouse gas emissions.

Efforts to reduce emissions of climate-disrupting greenhouse gases are moving at a pace that is, well, glacial. Human activity continues to spew tens of billions of tons of carbon dioxide into the air every year. And even though a bone-chilling cold snap has the eastern U.S. shivering this week, the globe as a whole continues to warm at a scary pace.
So it’s not surprising that some scientists, economists and politicians have begun to discuss a Plan B.
ANOTHER VIEW: One known way to cool the Earth
Variously known as solar geoengineering, radiation management or albedo modification,Plan B involves spraying particles into the atmosphere that would reflect sunlight and cool the Earth’s surface. Particle injection would be cheaper than emissions reduction and, like a volcanic eruption such as Mount Pinatubo in the Philippines in 1991, could produce relatively rapid results.
Voila! Problem solved.
Um, not so fast. As a National Academy of Sciences panel reported last week, solar geoengineering is no substitute for efforts to reduce greenhouse gas emissions and adapt to a changing climate. Here’s why:

“The nearly two years’ worth of reading and animated discussions that went into this study have convinced me more than ever that the idea of ‘fixing’ the climate by hacking the Earth’s reflection of sunlight is wildly, utterly, howlingly barking mad,” panel member Raymond Pierrehumbert, a University of Chicago geophysicist, wrote in Slate.
continue reading »
We can help bring down the Cabal and defeat the Depopulation Agenda
Big Pharma is one of the sources of funds for the Cabal. It also serves as the weapon of mass destruction via vaccine tainted with live virus it is suppose to protect us from, and the deadly chemicals use to treat our diseases that they caused through our GMO / pesticide contaminated food supply.
We can avoid using drugs, defeat any viral attack and scaremongering easily by knowing how to build our own comprehensive antiviral system. Find more about it here.