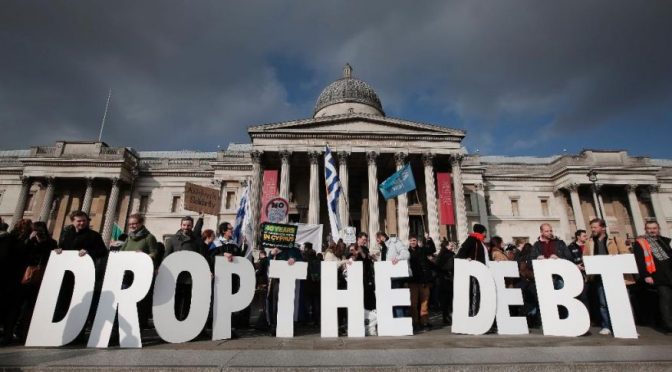 Feb. 18, 2015 (EIRNS)—What Americans need to know about Greece and “its debt,” is that the new Greek government is asking the European Union to shut down a huge Wall Street-London bank swindle and make economic growth possible again in Europe.

If that doesn’t happen, the worsening bankruptcy of the whole trans-Atlantic banking system will continue to generate desperate confrontations with major powers Russia and China, with the threat of world war.
The rest of Europe, so far, is refusing to shut that Wall Street swindle down, and today Obama’s Treasury Secretary Jack Lew backed up that refusal, including by a threatening phone call to the Greek finance minister.
What Obama, Merkel, et al. are demanding Greece do, instead of shutting down this Europe-wide swindle by the banks, is run a budget surplus of 4.5% of its annual economy, exclusively to pay the “Greek debt.” In U.S. terms? That would mean the United States running a government tax surplus of $750 billion a year, in order to pay down debt. You won’t hear Obama or Lew volunteering to try it; it is impossible.
The “Greek debt” swindle is the same one as the TARP bailout here, and the Federal Reserve’s printing of $4 trillion in new money to cover Wall Street’s debts; and its perpetrators are the same huge banks.
In the United States, the big banks took millions of subprime, unrepayable mortgages sold by their captive mortgage companies, and made them into toxic securities which blew up the financial system and the whole economy in 2008; the government bailed them out, while our living standards plunged.
In Europe, the banks bought the mortgage securities from the U.S. banks. At the same time they made millions of unrepayable subprime loans of their own—not only to homeowners, but also to governments without the means to repay them, like those of Greece, Ireland, Portugal, Hungary, and others. Big Wall Street banks were involved, particularly Goldman Sachs, which created “magic” derivatives: Take a bank loan to Greece, make it look like a mere “currency swap” rather than a debt—but turn it into a much bigger debt ten years later.
All this European subprime debt blew up on the big banks in 2009, a year after the U.S. subprime debt blew up on them. Then the European governments all superindebted themselves, to create a $1 trillion “European TARP” called by the initials EFSF. They bailed the megabanks out, with the IMF pitching in, using “only” about $600 billion to pay the unpayable “subprime government debt” part of it. $275 billion paid “Greek debt.”
This immense bank bailout got passed through the Greek, Irish, etc. governments, which passed it immediately on to the banks which had been their “subprime lenders.”
The Greek debt swindle was classic. In 2009 Greece’s debt was $300 billion. It then “got” two huge bailouts in 2010 and 2012, of about $140 billion each. Less than 10% of that $275 billion stayed in Greece and was spent by the Greek government; more than 90% went directly and immediately to Deutschebank, HSBC, JPMorgan Chase, and their fellow sharks, with small amounts crumbling to the hedge funds swimming alongside. Former Greek Economics Minister Louka Katseli has given documentation that the Greek government actually got to spend or invest just 3% of that $275 billion. The only banks which had to write off their “Greek debt” were Greek banks; all of Wall Street and the London-centered banks got their toxic debt “assets” guaranteed 100% by this European bailout swindle. This made the Greek banks so bankrupt that the Greek government then had to borrow more to bail them out with $50 billion—so Greece’s debt was increased when supposedly being reduced! A total swindle!
Then, between 2010 and today, Greece, Ireland, Portugal, etc. were ordered to pay the bill for this huge new Europe-wide bank bailout debt. They imposed a slashing domestic austerity until their people emigrated, death rates rose and birth rates fell, and clouds of wood smoke rose over modern cities whose inhabitants could no longer afford modern heat. After five years of this punishment, Greece’s $300 billion debt has become $350 billion or so—after $250 billion passed through to the banks!
And the other European countries are also on the hook for this phony debt, all of it. They guaranteed it; Greece and Ireland and the other austerity-crushed countries can’t pay it, so the rest of Europe must either agree to reorganize that debt and write it down, or their taxpayers will pay for the swindle.
This is why the new Greek government now demands that Europe shut down this global bank swindle: Write off the unpayable debt; invest in reviving economic productivity by building new economic infrastructure.
In addition, the megabanks have to be put through a Glass-Steagall reorganization and broken up.
To which Lyndon LaRouche has added,
“This thing has to be put loud and clear on every doorstep in the United States. If you want to avoid World War III, that’s what you’ll do.”
Meanwhile, in Ukraine, after the forces of the fascist Kiev regime fled under fire today from encircled Debaltseve, an actual ceasefire is now in effect, however fragile, and heavy weapons are being withdrawn from the front lines by both sides, as agreed by the leaders of the French, German, Ukrainian, and Russian governments at Minsk last week. To make it an enduring ceasefire, all we need do now, is immediately remove Nazi Victoria Nuland from the State Department.
source »
We can help bring down the Cabal and defeat the Depopulation Agenda