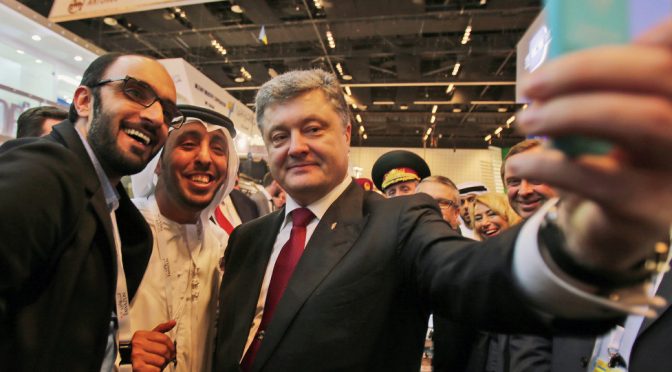 The House of Saud wants to have a proxy war with Russia and claims not afraid of WW3.
On the other hand, Abbot continues to display his stupidity in the global arena. 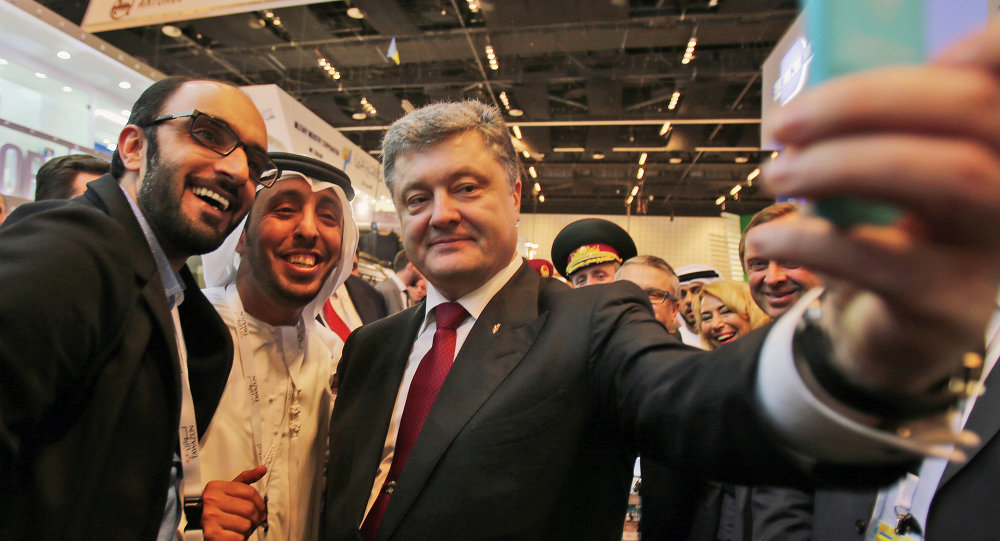 During his visit to Abu Dhabi, UAE on Tuesday, Ukrainian President Petro Poroshenko announced that he had signed a weapons deal with the Persian Gulf nation, without providing any more details.
Ukrainian President Petro Poroshenko announced the signing of a deal on military and technical cooperation with the United Arab Emirates on Tuesday, during his visit to the IDEX-2015 Arms Expo in Abu Dhabi.
The president told reporters that he had signed a “very important memorandum about military and technical cooperation” with his UAE counterparts, without providing any more information on what the agreement will entail. The deal was struck between Ukrainian officials and UAE Crown Prince and Armed Forces Deputy Supreme Commander Sheikh Mohammed bin Zayed al-Nahyan.
Further details on the deal have not been confirmed by Ukrainian or Emirati officials. After having put off Indonesians by asking them to return AUD 1 billion which had been sent in 2004 for tsunami victims, the Australian PM on Monday admitted he thought about sending Australian troops to Ukraine.
© AFP 2015/ Saeed KHAN
Abbott Urges Indonesia to Spare Two Australians, Remember Tsunami Aid
Australian Prime Minister Tony Abbott told the country’s parliament on Monday that there was truth to Australian media reports from August that he considered sending 1,000 Australian troops to Ukraine, as part of discussions with his Dutch counterparts in the days after Malaysia Airlines flight MH17 was shot down last year.
“There was talk with the Dutch about a joint operation,” said Abbott, in response to a question from the opposition. “This arose out of the most important and the most necessary discussions between the Dutch military and our own,” declared Abbott, adding that the idea was “not frivolous.” Flight MH17 crashed in Ukraine in July 2014, resulting in the death of 38 Australian citizens; the investigation is ongoing.
The PM, when challenged during parliamentary Question Time, labelled as “absolutely fanciful” a media report of a proposal he’d made during a meeting to send 3,500 Australian ground troops to Iraq in a “unilateral invasion,” an idea which came as an understandable shock to the country’s military planners. The Australian newspaper which broke the news said “We stand by the story 100 percent.”
Read more: http://sputniknews.com/asia/20150224/1018680054.html#ixzz3SgFVZmmV

Angry Indonesians have compared Tony Abbott to Shylock, the moneylender in The Merchant of Venice who demanded a pound of flesh when his rival defaulted on a loan.
“Australians need a prime minister, not a Shylock and drug dealer’s cousin,” a banner said at a protest held on car-free Sunday at Jakarta’s famous Hotel Indonesia roundabout. An Indonesian man throws money on a banner featuring Tony Abbott as part of protests in Jakarta.
Passersby scattered silver coins on banners featuring the Australian Prime Minister with red tape crossed over his mouth.
The protest is part of a campaign to “repay” the $1 billion in Australian aid given to Indonesia after the 2004 tsunami.
Mr Abbott reminded Indonesia of the donation as part of his pleas for the lives of the Bali nine duo on death row. Indonesians hold posters aimed at Tony Abbott during protests in Jakarta.
His comments were interpreted as a threat and have inflamed tensions between Australia and Indonesia with the executions of Andrew Chan and Myuran Sukumaran imminent.
“Abbott = asal bacot” (slang for Abbott is a big mouth) one sign said and another said “We don’t no Australian education” (sic).
We can help bring down the Cabal and defeat the Depopulation Agenda