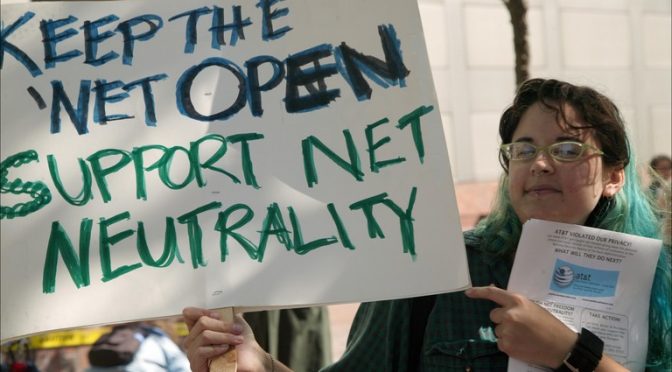 Why do we have to protest in order to make our sentiments heard?
Because that’s how democracy works.
Really?

But why can’t government officials just do the right thing by default?
They won’t.
That’s how a corporate government behave. They serve the corporate interests first before anything, well, just the corporate interests and nothing else.
The only alternative is to create a system in which all our voices are heard in real time. The template for that system is already here.
OpenSource Community.
To hell with “representative democracy.” It’s an inefficient system, wasting too much resources and energy.
It’s not even a democracy, nor is it representative of our collective will but only serving the Corporate interests of the Anglo-Roman Empire. 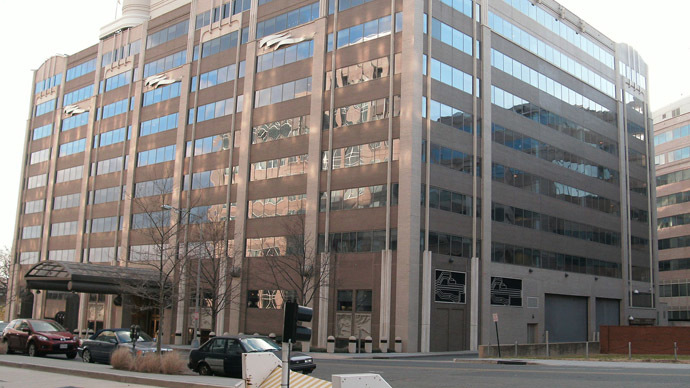 The Federal Communications Commission on Thursday voted to approve new rules endorsed by advocates of net neutrality and President Barack Obama that will prohibit internet service providers from discriminating against content producers.
As widely expected, the FCC voted 3-2 during a Thursday morning hearing in Washington, DC, moving to adopt a proposal authored by the commission’s chairman, former cable industry lobbyist Tom Wheeler.

“Today we are here to answer a few simple questions” about the internet, Commissioner Mignon Clyburn said. “Who determines how you use the internet? Who decides what content you can view and when? Should there be a single internet or fast lanes and slow lanes? Should internet service providers be left free to slow down or throttle certain applications or content as they see fit? Should your access to the internet on your mobile device have the same protections as your fixed device at home?”

Who benefits from #openinternet — citizens, communities, companies, creators,countries ? In short, everyone. #netneutrality.

By approving rules that will let the FCC regulate the internet under Title II of the Communications Act, similar to how traditional telecommunications are governed already under law, ISPs will now be prohibited from giving preferential treatment to content producers, an arrangement that net neutrality proponents feared would allow for internet “fast lanes,” in which companies could pay to have their products delivered more quickly to US consumers.
[soundcloud url=”https://api.soundcloud.com/tracks/151558240″ params=”color=00cc11″ width=”100%” height=”166″ iframe=”true” /]
“Today is a red-letter day for internet freedom,” Wheeler said in his remarks. “For consumers who want to use the internet on their terms. For innovators who want to reach consumers without the control of gatekeepers. For a future in which there are rules to protect the internet and its users.”
BREAKING: Strongest ever #NetNeutrality protections just passed by @FCC. https://t.co/ZMfHEEfjkW [+image]
— ACLU National (@ACLU) February 26, 2015
“But importantly, today is also a day that gives network operators what they require to continue to expand broadband service and competition. The rules for a fair and open internet are not old-style utility regulation, but a 21st Century set of rules for a 21st Century service,” the chairman continued. “Rate regulation, tariffing and forced unbundling have been superseded by a modernized regulatory approach that has already been demonstrated to work in encouraging investment in wireless voice networks.”
After Wheelerintroduced his proposalvia an open letter at the beginning of February, the vice president of federal regulatory for telecom giant AT&T said the company could pursue a lawsuit if plans similar to Wheeler’s were approved since the internet is an “information service.”

“When the FCC has to defend reclassification before an appellate court, it will have to grapple with these and other arguments,” AT&T’s Hank Hultquist wrote.
A court battle is expected. Other ISPs, such as Comcast, could join or sue the government separately.
“It is a defining moment, but it will be redefined by the courts, Congress and other entities including the marketplace going forward,” Gary Arlen, a research analyst, told USA Today.

Apple co-founder Steve Wozniak is in the house for the @FCC #NetNeutrality vote http://t.co/V5LAjm0Pvd pic.twitter.com/GMXrEv9eTe

Many Republicans in Congress oppose the proposal, saying that government meddling would snuff out investment in the industry. The GOP-led legislative branch could pass its own net neutrality laws, which would supersede the FCC’s regulations.
Before the commissioners voted on Wheeler’s proposal, they heard testimony in favor from Etsy CEO Chad Dickerson; television writer, producer and director Veena Sud; and founder of the internet Sir Tim Berners-Lee. Both Dickerson and Sud spoke about how net neutrality will benefit women, with the Etsy CEO saying that 88 percent of the online marketplace’s 1.2 million sellers are women, while the creator of AMC-cum-Netflix TV show ‘The Killing’ noted that “while little more than 20 percent of comedies and dramas on traditional television have a woman at the helm, almost 40 percent of the series airing on these new online platforms [like Amazon and Netflix] this season will be run by women.”

Democratic commissioners Wheeler, Clyburn and Jessica Rosenworcel voted for the order.
“This is more than a theoretical exercise,” Clyburn said in her wide-ranging comments, which covered the Founding Fathers, the Civil Rights Movement and MC Hammer. “Providers here in the United States have, in fact, blocked applications on mobile devices, which not only hampers free expression, it also restricts… innovation by allowing companies, not the consumer to pick winners and losers.”
“As many of you know, this is not my first open internet rodeo,” she added. “This is our third bite at the apple, and we must get it right.”
Rosenworcel’s remarks were brief.
“We cannot have a two-tiered internet with fast lanes that speed the privileged and leave the rest of us lagging behind. We cannot have gatekeepers who tell us what we can and cannot do and where we can and cannot go online. And we do not need blocking, throttling or paid prioritization schemes that undermine the internet as we know it,” she said. “For these reasons, I support Chairman Wheeler’s efforts and rules today.”

The FCC’s vote on #netneutrality today is victory for the world’s largest public resource: the Web. https://t.co/ozk7WSir3L

There was a moment of levity between Wheeler and the two GOP commissioners as a segue between their remarks.
“I tried to keep score on all the things I disagreed with that you said,” the FCC chairman told Commissioner Ajit Pai. “But I’ve got you on my scorecard now as undecided, but probably wavering against.”
Wheeler then called on Commissioner Mike O’Rielly, who responded, “Thank you Mr. Chairman. Look forward to my scorecard as well.”
Pai has been vehemently against Wheeler’s proposal from the start, and spent 30 minutes elaborating on his stance Thursday.
“The internet is not broken. There is no problem for the government to solve,” he said. “That the internet works, that internet freedom works, should be apparent to anyone with an Apple iPhone or Microsoft Surface, a Samsung Smart TV or Roku, a Nest thermostat or a FitBit. We live in a time where you can buy a movie from iTunes, watch a music video on YouTube, listen to a personalized playlist on Pandora, watch your favorite novel come to life on Amazon streaming video, help someone make potato salad on kickstarter, check out the latest comic on xkcd, see what Seinfeld has been up to on Crackle, navigate bad traffic with Waze, watch an eventful FCC meeting online and do literally hundreds of other things with an online connection.”

Relax, the FCC is here to help improve the Internet. pic.twitter.com/QY6E7od4ic

“For all intents and purposes, the internet as we know it didn’t exist until the private sector developed it in the 1990s. And it’s been the commercial internet that has led to the creativity, the innovation and, frankly, the engineering genius we see today,” Pai continued, calling the reports of internet fast lanes and throttling “anecdote, hypothesis and hysteria.”
O’Rielly agreed that the claims against ISPs were conjecture.
“Even after enduring three weeks of spin, it is hard for me to believe that the Commission is establishing an entire Title II/net neutrality regime to protect against hypothetical harms. There is not a shred of evidence that any aspect of this structure is necessary. The D.C. Circuit called the prior, scaled-down version a ‘prophylactic’ approach. I call it guilt by imagination,” he said before voting against the order. “There is a reason that Title II has been called the nuclear option. No matter what the FCC tries to do to limit the fallout (and it is not trying very hard to do that here) the decision will still [negatively] impact investments.”
The FCC’s strict new rules ban blocking high-bandwidth applications, throttling internet speeds or creating “fast lanes” for customers who pay a premium. In an unprecedented move, the rules will apply not just to traditional ISPs, but to mobile providers like Verizon and AT&T as well.

In a signed letter to supporters, Pres Obama thanks over 4million he says wrote the FCC urging net neutrality. pic.twitter.com/HIAOP3C7Yj