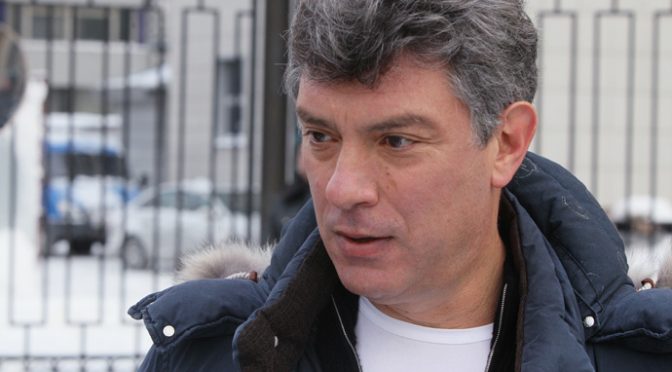 It wouldn’t surprise us should this killing be blamed on Putin. Until recently, Putin enjoys at least 80% Russian population popularity. There simply is no motivation to eliminate political enemies at this time.
He should know. He comes from the intelligence community. And so far, all he’s done is being effective at his strategies in Ukraine, Syria and Crimea.
In deep contrast, the other side is so notorious for launching false flag operations when checkmated.
Well, the Minsk Peace Talks 2.0  was another checkmate for the CIA, right?

And so it begins…
“Earlier this month, Nemtsov gave an interview in which he said he was scared that Putin would try to have him killed.” – Guardian
“”I’m afraid Putin will kill me,” he said in the article (in Russian) on 10 February. ” – BBC

Opposition politician Boris Nemtsov killed in the center of Moscow

A law enforcement source told Interfax news agency that a white vehicle approached Nemtsov, fired the shots, and rushed away.
Police have dubbed the operation to catch the killers ‘Interception.’
The Internal Affairs Ministry has confirmed the murder of Nemtsov.
“[We] confirm that the man was killed in central Moscow, documents for the name Boris Efimovich Nemtsov have been found,” Interfax quoted the ministry’s press service as saying.
According to police, Nemtsov was accompanied by a woman at the time of the murder. She is now being questioned.
“B. Nemtsov was walking on Bolshoy Moskvoretsky Bridge with a visitor from Ukraine. It was then when he was shot from a passing by car,” the ministry’s official representative, Elena Alekseeva, said, as quoted by Rossiya 24 TV channel.
“The woman who was with him is currently being interrogated in a police department,” Alekseeva said.
Earlier, Nemtsov’s colleague has confirmed his death.
“Unfortunately, I’m currently looking at the body of Nemtsov on the Zamoskvoretskiy bridge [near Vasilyevsky spusk],” a fellow member of his RPR-Parnas party, Ilya Yashin, confirmed to RIA Novosti. “I see the body, and a lot of police.”

#Nemtsov was shot dead right in front of the Kremlin. A group of men in a car stopped in front of him and fired 4 shots

Nemtsov served as Russian deputy prime minister under former President Boris Yeltsin. Though he was more involved in business than politics in recent years, Nemtsov voiced opposition to President Vladimir Putin, criticizing the government and its policies. Since 2012, he co-chaired the pro-business party RPR-PARNAS (Republican Party of Russia – People’s Freedom Party).
Nemtsov’s assassination comes just one day ahead of the Vesna (“Spring”) opposition rally slated for March 1 in Moscow.
Russian President Vladimir Putin was “immediately informed” about Nemtsov’s assassination, presidential press secretary Dmitry Peskov said.
“Putin has stressed that this brutal murder has all [the] signs of a contract murder and is extremely provocative,” Peskov said.
“The president has expressed his deep condolences to the family of tragically deceased Nemtsov,” he added.
DETAILS TO FOLLOW
We can help bring down the Cabal and defeat the Depopulation Agenda
Big Pharma is one of the sources of funds for the Cabal. It also serves as the weapon of mass destruction via vaccine tainted with live virus it is suppose to protect us from, and the deadly chemicals use to treat our diseases that they caused through our GMO / pesticide contaminated food supply.
We can avoid using drugs, defeat any viral attack and scaremongering easily by knowing how to build our own comprehensive antiviral system. Find more about it here.