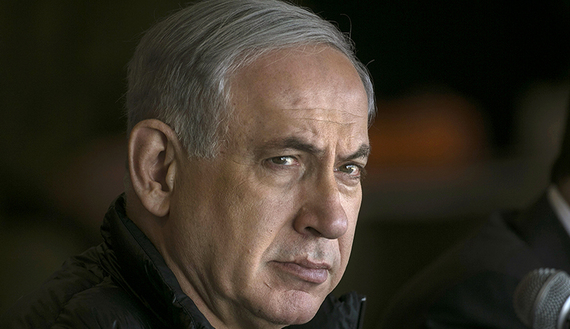 Meir Dagan says prime minister’s policies are ‘destructive to the future and security of Israel’
A former head of Israel’s foreign intelligence service Mossad is urging voters to oust Binyamin Netanyahu in the next general election, accusing the prime minister of endangering the country’s security with his stance on the Iranian nuclear programme.

Meir Dagan, a vocal critic of Netanyahu’s Iran policy since stepping down as Mossad chief four years ago, is to be a keynote speaker at a rally in Tel Aviv next weekend, calling on the public to turf the prime minister out of office on 17 March.
Netanyahu was due to fly to Washington on Friday.
In a trenchant critique of Netanyahu’s leadership, delivered in a long interview in Israel’s biggest-selling newspaper Yedioth Ahronoth, Dagan said the prime minister’s policies were “destructive to the future and security of Israel”.
Netanyahu’s planned speech has brought the already uncomfortable state of relations with the Obama administration to a new low amid suspicion that the speech – at the invitation of Republican house speaker John Boehner – was designed to enhance the Israeli prime minister’s electoral prospects.
Netanyahu has said he believes that his speech is necessary to strengthen opposition to a potential nuclear deal with Iran being negotiated by the US and key allies.
The intervention by Dagan – who ended his tenure as the head of Mossad in 2011 – is doubly significant because he shares the prime minister’s view over the risk posed by a nuclear Iran and is regarded as generally hawkish on defence and security matters.
Netanyahu has made security and the Iranian nuclear programme – and the US-led negotiations to contain it – his key election issue.
Recent days have also seen anonymous criticism of Netanyahu’s speech from serving intelligence officers as well as from former diplomats and political figures in Israel, including Isaac Herzog, the leader of the opposition.
Saying that he was aware that Israel was already “paying a high price” over the confrontation with the Obama administration – albeit in ways he could not disclose – Dagan said: “The person causing the most strategic harm to Israel on the Iranian issue is the prime minister.
“As someone who has served Israel in various security capacities for 45 years, including during the country’s most difficult hours, I feel that we are now at a critical point regarding our existence and our security.
“Our standing in the world is not brilliant right now. The question of Israel’s legitimacy is up for debate. We should not erode our relations with our most important friend. Certainly not in public, certainly not by becoming involved in its domestic politics. This is not proper behaviour for a prime minister.”
Insisting he held no personal animus towards Netanyahu, who had helped him get a liver transplant, he said: “I have no personal issue with the prime minister, his wife, his spending and the way he conducts himself. I’m talking about the country he leads.
“An Israeli prime minister who clashes with the US administration has to ask himself what the risks are. On the matter of settlements, there is no difference between the two [US] parties. And even so, they provide us with a veto umbrella. In a situation of a confrontation, this umbrella is liable to vanish, and within a short time, Israel could find itself facing international sanctions.
“The risks of such a clash are intolerable. We are already today paying a high price. Some of them I know and cannot elaborate.
“I would not have confronted the United States and its president. Netanyahu may get applause in Congress, but all the power is in the White House. What will Netanyahu gain by addressing Congress? I just don’t understand it. Is his goal to get a standing ovation? This trip to Washington is doomed to failure.”
Dagan’s intervention follows that of fellow former Mossad head Shabtai Shavit and the former head of the elite Sayeret Matkal commando unit who are among scores of former commanders involved in a video published on Facebook calling for Israel to replace Netanyahu.
Netanyahu’s determination to push on with his speech has seen unusually critical remarks from senior US administration officials in the last week who have gone out of their way to express their displeasure.
Among them was John Kerry, the secretary of state, who openly questioned Netanyahu’s judgment on the issue, and Obama’s national security adviser Susan Rice who warned that it was “destructive to the fabric” of US-Israeli relations.
Netanyahu’s plans to speak to Congress have also irritated many Democratic party members who view the speech as a partisan intervention in US politics on the side of the Republican party, prompting a number of Democrats to say they would not attend the speech.
The speech is also being snubbed by Obama and Joe Biden, his vice president.
After leaving Mossad, Dagan went public with his criticism of Netanyahu’s Iran policy, saying a military attack on Iran was “the stupidest thing I have ever heard”.
source »
We can help bring down the Cabal and defeat the Depopulation Agenda
Big Pharma is one of the sources of funds for the Cabal. It also serves as the weapon of mass destruction via vaccine tainted with live virus it is suppose to protect us from, and the deadly chemicals use to treat our diseases that they caused through our GMO / pesticide contaminated food supply.
We can avoid using drugs, defeat any viral attack and scaremongering easily by knowing how to build our own comprehensive antiviral system. Find more about it here.