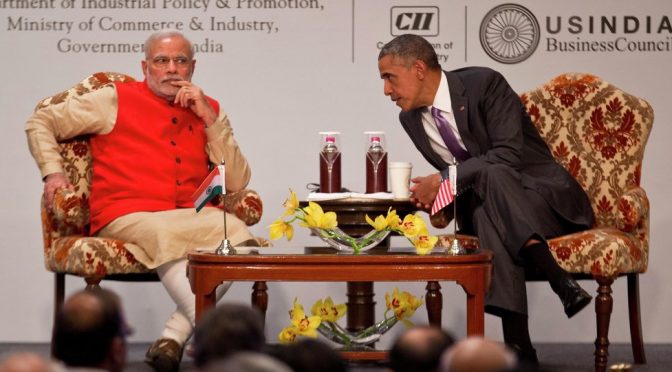 Attempts to break up the BRICS through military agreements and other “divide and conquer” methods may not work at this time.
Asia’s position is very clear: no more wars of aggression. New military installations at this time is unacceptable.

US Tries to Bully India Into Defense Cooperation Agreement

The White House is playing hardball with the government of India, pushing the Narendra Modi administration to sign three military agreements Washington is keen on but New Delhi has nixed in the past.
The Logistics Support Agreement (LSA), the Communication Interoperability and Security Memorandum Agreement (CISMOA) and the Basic Exchange and Cooperation Agreement for Geo-Spatial Cooperation (BECA) means greater cooperation between the two governments, including that each country provide logistic support, refueling and berthing facilities for each other’s warships and aircraft.


© Flickr/ Arctic Wolves
Previous Indian governments have been against the agreements, arguing that cooperating with the United States on such an extensive level militarily would undermine India’s strategic autonomy. But a new Indian government means a renewed push from Washington, and they’re turning up the heat this time around.
After a meeting earlier this week in New Delhi between Obama and Modi officials, the Times of India reported that a US official said that if India did not sign the pacts, it would become “an issue.”
One area that could be adversely affected is India’s bid to become a permanent member of the UN Security Council. President Obama visited India last month and reiterated Washington’s support for India’s Security Council spot, and White House press secretary Josh Earnest this week repeated that support.


US-India Relations From 1946 to Present Day
“As it relates to India’s membership in the security council, I know the President endorsed that…the Security Council in the context of a variety of other important reforms to the operations of the United Nations,” White House Press Secretary Josh Earnest said on Thursday.
The US says these agreements are necessary so that allies can help each other spread the burden of maintaining a robust military presence worldwide. However, India doesn’t have plans to deploy its military personnel anywhere in North America, while the US is deeply interested in expanding the Pentagon’s capabilities in Asia. Especially in light of souring relations with India’s neighbor, Pakistan, which repeatedly demanded that the US withdraw drone bases from the country and respect  Pakistan’s sovereignty.
Read more: http://sputniknews.com/world/20150227/1018858757.html#ixzz3T0L6rdlw
We can help bring down the Cabal and defeat the Depopulation Agenda
Big Pharma is one of the sources of funds for the Cabal. It also serves as the weapon of mass destruction via vaccine tainted with live virus it is suppose to protect us from, and the deadly chemicals use to treat our diseases that they caused through our GMO / pesticide contaminated food supply.
We can avoid using drugs, defeat any viral attack and scaremongering easily by knowing how to build our own comprehensive antiviral system. Find more about it here.