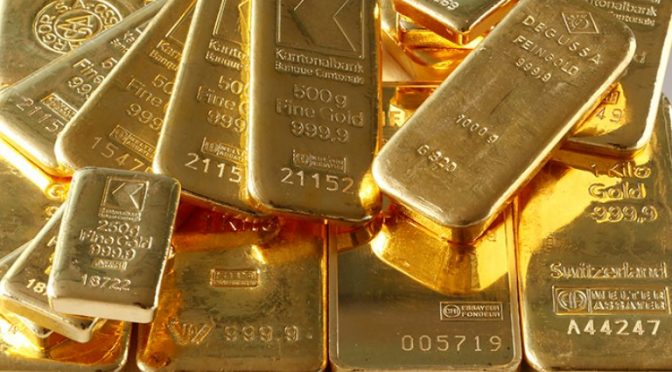 In an RT news article late last year, it said the Ukrainian Central Bank lost $300,000 in gold but gained very expensive lead. Maybe the Federal Reserve was just trying to help Poroshenko’s forces who were struggling for ammunition at the time.
All countries that were offered “democracy” by the US should have realized by now that everything, i.e. military and diplomatic assistance, extended to them were not for free.
Libya, Iraq, Afghanistan, they were all selling their sovereignty for a pittance…
21st Century Wire says…
As the dust settles in Kiev, another money trail has been revealed…
According to reports out of Kiev (see links below), the US has quietly transfers 33 tons of Ukrainian gold out of the country and back to vaults in the US. Presumably, this sovereign wealth transfer would be counted as partial “collateral” for a fresh round of IMF, US FED, and ECB paper debt that is currently being organised for dumping into the Ukraine’s economic black hole.

Multiple inquiries to US Federal Reserve administrators into the location of the Ukraine’s gold have been met with the proverbial ‘pass the buck’, making tracking and tracking the final resting place of these 33 tonnes very difficult indeed – but one can expect that the NY Fed is probably the institution who has masterminded this financial heist.

Note how gold flows into New York, but has difficulty flowing out of US private banking hands as is the case with the ‘confiscation’ of Germany’s gold. Numerous attempts by Bundesbank to repatriate its gold reserves have been met with a brick wall, and to date, Germany has only recovered a miniscule 5 tonnes directly from the NY Fed – out of the total 674 tonnes (an additional 32 tonnes were recovered via French central bank).
It’s worth pointing out here that when NATO sacked Libya in 2011, one of the first items that came into question was the gold in Libya’s state-run central bank. Prior to the NATO takeover of that country, Libya had one of the highest per capita gold reserves in the world, alongside Lebanon, giving Libya a distinct advantage should it carry out former Libyan leader Muammar Muhammad al-Gaddafi’s long-term financial transition to a gold-backed Libyan Dinar. As you can imagine, this is no longer the case in Tripoli.
Additionally, like Libya, both Syria and Iran are two of the world’s last remaining nation states who both have state-run central banks and gold reserves which fall outside of the world’s private central banking syndicate.
Needless to say, you can see an obvious pattern emerging here.
And the story continues…

The Big Lie + What Happened To Ukraine’s Gold?

By PM Fund Manager Dave Kranzler
Investment Research Dynamics
The Big Lie is that Central Banks don’t care about gold. Nothing could be further from the truth.
Ben Bernanke, more than once, claimed that he didn’t understand gold. When Ron Paul asked Bernanke in front of Congress why Central Banks own gold if it’s irrelevant, Bernanke flippantly suggested that it was out of tradition. In both cases Bernanke was lying and he knew it.
In comparison, Greenspan seemed to have some respect for the laws of economics and – at least that I can recall – never would outright state that gold was not an economic factor.   Greenspan lied as much as Bernanke did about everything else but he never committed himself to lie about gold.  Most of you have probably read Greenspan’s 1966 essay, “Gold and Economic Freedom” (linked).  I have read it several times because it explains as well as anything out there why gold works as a currency and why Government-issued fiat currency does not.
What I find amazing about The Big Lie about Central Banks and gold is that if gold really is considered to be irrelevant, the how come Central Banks – especially the Fed – are so secretive about their gold storage and trading activities?  What’s even more amazing is that no one other than Ron Paul and GATA asks them about this. Think about it. GATA spent a lot of money on legal fees attempting to get the Fed to publicly disclose its records related to the Fed’s gold activities. The Fed spent even more money denying GATA’s quest. And how come the Fed won’t submit to a public, independent audit of its gold vaults?
This brings me to the issue of the Ukraine’s gold. According to public records, the Government of Ukraine owns 33 tonnes of gold that was being safekept in Ukraine. Last week a Ukrainian newspaper reported that acting PM Arseny Yatsenyuk ordered the transfer of that gold to the United States. The actual report is here:  LINK. Jesse’s Cafe Americain provided a translated version here: LINK.
On the assumption that the report is true, and so far I have not seen any commentary or articles suggesting it is not true, the biggest question is, how come the U.S. has absolutely no problem loading up and transporting 33 tonnes of gold from Ukraine to the U.S. but seems to have difficulty loading up and transporting any of Germany’s gold from New York to Berlin? And how come the U.S. and Ukraine seem to care about that gold at all, if indeed gold is irrelevant? It would seem that it would be a lot less expensive  and logistically complicated just to have the U.S. military post a few armed guards around the gold if they’re worried about theft. On the other hand, I’m sure Putin would be happy to buy the gold from Ukraine.
What makes the story even more interesting is that GATA’s Chris Powell has spent considerable time trying to get an answer to the question of whether or not the U.S. has taken custody of Ukraine’s gold. When he queried the NY Fed, they responded with:
“A spokesman for the New York Fed said simply: “Any inquiry regarding gold accounts should be directed to the account holder. You may want to contact the National Bank of Ukraine to discuss this report” (LINK).
After trying for two days to get an answer from the U.S. State Department, they finally responded by referring him to the NY Fed (LINK).
The final piece in verifying that the report is true is deflection from Ukraine. Mr. Powell has queried the National Bank of Ukraine, the Ukrainian Embassy in DC, and the Ukrainian mission to the UN in NYC. Crickets. As Chris states the case:
“The difficulty in getting a straight answer here is pretty good evidence that the Ukrainian gold indeed has been sent to the United States.”
Unfortunately, it is likely that the citizens of Ukraine will end up paying the same price for allowing the U.S. to “safekeep” their sovereign gold. That price is the comforting knowledge that their gold has been delivered safely to vaults in China under U.S./UK bullion bank contractual delivery obligations, where it will be locked away for centuries.
All this skullduggery over a barbarous relic that has been deemed irrelevant by the U.S. Federal Reserve…
source »

One thought on “U.S. Quietly Snatches the Ukraine’s Gold Reserves”