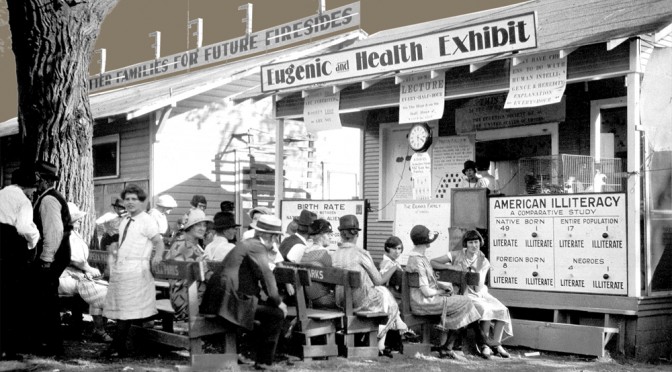 For the ordinary mortals in most of us, the reality of governments involved in deliberately reducing the population by any means at their disposal is simply unacceptable, they must plunge into the most common escape of all, i.e. self-denial.

One of the best strategies that contributed greatly to the success of the Illuminati in subduing the world to its knees is their effective conscription of the best minds in every field of the era. Not only that their controversial programs were legitimized but were also emboldened in manner that is beyond popular understanding.
Eugenics is no exception.
The Eugenics Program of the Western Oligarch is the reason for the explosion of AIDS and other cancers, and the flooding of worthless GMO foods in the market, and the deliberate carcinogenic spraying of our skies.
The World Health Organization itself is engaged, together with Baxter and Novartis, in the willful extermination of US citizens through H1N1, and has been financing bioweapons research which brought us HIV-AIDS.

The Center for Disease Control owns the patent for weaponized Ebola virus, and all of the aforementioned entities are engaged in media fear mongering campaign to force all of us to vaccinate.
Vaccines, until now are tainted with mercury, formaldehyde, human fetus and live “attenuated” viruses it is advertized to protect us from.

Due to its sheer ugliness, the disclosure on Eugenics can only be done in a gradual manner, but the neutralization  of its ardent proponent must be swift.

Steven A. Farber
In this special issue devoted to the study of pigmentation, it is only fitting that we reflect on how this trait has been utilized to promote specific political and social agendas in both the United States and Europe. It was Francis Galton, a cousin of Darwin, who coined the term “eugenics” in 1883 while advocating that society should promote the marriage of what he felt were the fittest individuals by providing monetary incentives.1 Shortly thereafter, many intellectuals and political leaders (e.g., Alexander Graham Bell, Winston Churchill, John Maynard Keynes, and Woodrow Wilson) accepted the notion that modern societies, as a matter of policy, should promote the improvement of the human race through various forms of governmental intervention. While initially this desire was manifested as the promotion of selective breeding, it ultimately contributed to the intellectual underpinnings of state-sponsored discrimination, forced sterilization, and genocide.
continue reading »
We can help bring down the Cabal and defeat the Depopulation Agenda
Big Pharma is one of the sources of funds for the Cabal. It also serves as the weapon of mass destruction via vaccine tainted with live virus it is suppose to protect us from, and the deadly chemicals use to treat our diseases that they caused through our GMO / pesticide contaminated food supply.
We can avoid using drugs, defeat any viral attack and scaremongering easily by knowing how to build our own comprehensive antiviral system. Find more about it here.