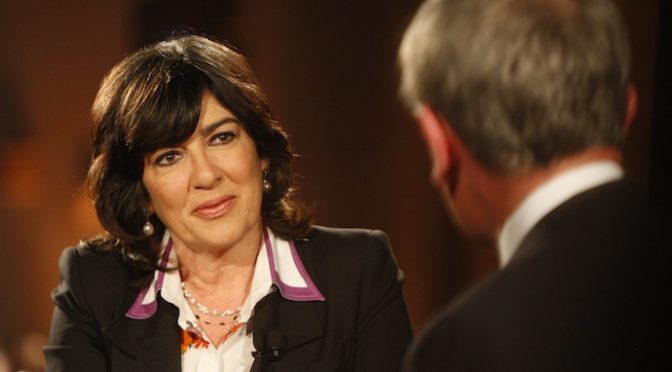 Clearly, CNN’s Christiane Amanpour hasn’t learn her lesson yet.
Previously, this lady interviewed RT ‘s Anissa Naquai regarding Russia Today’s “obvious bias towards Kremlin”, to which the latter eloquently responded with CNN’s obvious bias towards warmongers. CNN subsequently resorted to self-censorship, omitting Anissa’s stellar response. That wasn’t the only CNN’s blunders over the last few years.
She thought that by interviewing someone very close to the murdered Boris Nemtsov, she can advance her husband’s agenda and that of the Corporation.
But all she got is the real sentiment of the Russian opposition that knows exactly what game the US is playing, and some insider information about the lady companion of the victim that night of his assassination.

https://www.youtube.com/watch?v=y2qnUet9CSU&feature=youtu.be
Look how bitter she was when she closed the interview with the phrase “That’s the view from the Kremlin…” 😉
This could only signifies one thing — mainstream media lies are defeated!
We can help bring down the Cabal and defeat the Depopulation Agenda
Big Pharma is one of the sources of funds for the Cabal. It also serves as the weapon of mass destruction via vaccine tainted with live virus it is suppose to protect us from, and the deadly chemicals use to treat our diseases that they caused through our GMO / pesticide contaminated food supply.
We can avoid using drugs, defeat any viral attack and scaremongering easily by knowing how to build our own comprehensive antiviral system. Find more about it here.

3 thoughts on “CNN's Amanpour Got Slapped Again, This Time by Nemtsov's Friend”