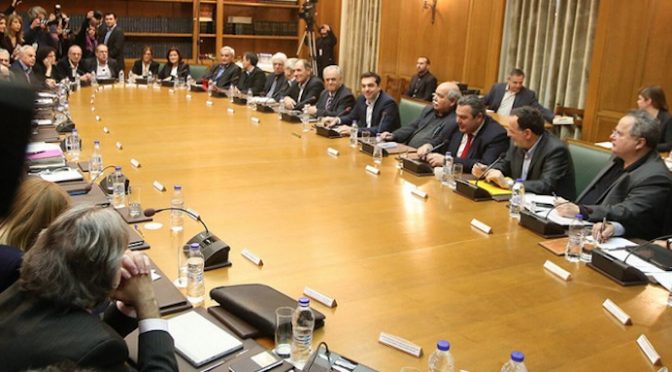 Sick minds are only capable of formulating destructive ideas producing bad results.
The financial trickery of creating wealth out of thin air, and ultimately through the sweat of the Common Man by forcing countries to suffocating cycles of debt has come from the sick notion that the world is really meant to be ruled by the few highly organized bloodlines.

Those inbred families that for centuries have made their fortunes through manipulations, strategic alliances and downright murders, are having a hard time reconciling their unscrupulous habits with the massive awakening that is threatening the forced status quo.
The new players of the world geopolitical boardgame are throwing unexpected moves, introducing unreadable strategies that the old guards are finding it hard to comprehend.
The New Greek government is walking in fine measured steps that will finally illustrate the need to leave the Euro in favor of the BRICS.
This article appears in the March 6, 2015 issue of Executive Intelligence Review.

by Dean Andromidas
[PDF version of this article]
Feb. 27—Greek Finance Minister Yanis Varoufakis deployed what he called “creative vagueness” in drafting the reforms Greece will commit itself to in return for a four-mouth “bridge agreement” with the European Union. This was enough to get past the Eurogroup of finance ministers and the German Bundestag and even to generate gossip about Greece being ready to negotiate a third bailout agreement. Nonetheless it did not please International Monetary Fund (IMF) Managing Director Christine Lagarde or European Central Bank (ECB) President Mario Draghi, who both expressed fears that it departed from previous “commitments.”
On the other hand, there was criticism among leading members of the Syriza Party, which heads Greece’s ruling coalition, as well as from Greek composer, resistance fighter, and political activist Mikis Theodorakis. The latter expressed his concern that the agreement does not clearly state that the country has reasserted its full national sovereignty over the country’s public assets and in conducting its economic and foreign policies. This was the key promise of Syriza and its coalition partner, the Independent Greeks, during the recent election campaign.
Prime Minister Alexis Tsipras helped to clear up this “vagueness” during a televised meeting of his full Cabinet on Feb. 27, where he declared: “Some have bet on a third bailout in June. I’m very sorry but once again we will disappoint them. Let them forget a third bailout. The Greek people put an end to bailouts with their vote…. What we want at the end of four months is a mutually acceptable agreement with the partners for the final release of the country from suffocating and humiliating guardianship.” He called for an agreement that will make Greece’s financial commitments socially sustainable and enable to the country to have growth and social cohesion.
What the Committee Will Do
Tsipras announced that next week his government will send to Parliament a proposal to establish a committee to investigate how the Memorandum of the so-called Troika (IMF, ECB, European Commission) was imposed on Greece four years ago. The Memorandum has caused soaring poverty and rising death rates. The committee, he said, should “investigate the circumstances and the political responsibilities of all factors at play in the country’s bankruptcy that led us to the forced loan. With responsibility and honesty, we will take this policy initiative, because the Greek people have a right to know the truth, because we are morally and politically obliged to do justice.”
Earlier on the same day, Deputy Social Insurance Minister Dimitris Stratoulis stated simply that the debt will “not be paid in full,” and “cannot be repaid because the country and our people will be brought to full enslavement.”
Parliament Speaker Zoe Konstantopoulou (Syriza) had called for such an investigative committee on Feb. 24.
Konstantouplou, following a meeting with her Cypriot counterpart Yiannakis Omirou, who is a member of the opposition Cypriot Movement for Social Democracy, said that one committee would be set up to audit Greece’s public debt and another would check the circumstances under which Greece had to sign its first bailout agreement in May 2010.
She said the investigation into how Greece’s debt, currently totaling around 175% of GDP, was accumulated would be a “tool aimed at rectifying an acute injustice against the Greek people.” Konstantopoulou then asked Omirou for the Cypriot House of Representatives to help in this search for truth and said that the Greek Parliament would assist to seek the truth about how a similar Memorandum was imposed on Cyprus.
Defense Minister Panos Kammenos, leader of the Independent Greeks, made a similar proposal the same day before his party’s parliamentary group and it was unanimously accepted.
Such an investigation will reveal facts already detailed by EIR’s exposé, “The Greek Government Is Right: The Debt Is a Swindle” (EIR, Feb. 27, 2015).
Such an investigation would provide crucial information to be presented before a European Debt Conference, as proposed by the Greek government, to demonstrate the illegitimacy of the debt. (See “Convene a European Debt Conference for 2015, EIR, Feb. 13, 2015.)
We can help bring down the Cabal and defeat the Depopulation Agenda
Big Pharma is one of the sources of funds for the Cabal. It also serves as the weapon of mass destruction via vaccine tainted with live virus it is suppose to protect us from, and the deadly chemicals use to treat our diseases that they caused through our GMO / pesticide contaminated food supply.
We can avoid using drugs, defeat any viral attack and scaremongering easily by knowing how to build our own comprehensive antiviral system. Find more about it here.