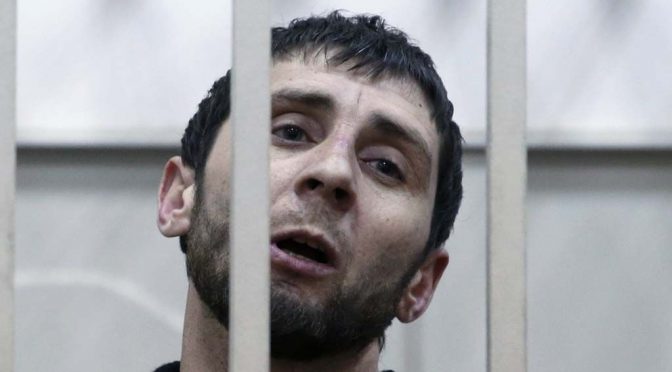 English.news.cn   2015-03-08
MOSCOW, March 8 (Xinhua) — One of the five suspects related to the murder of Russian opposition politician Boris Nemtsov has pleaded guilty, a court in Moscow said Sunday.

According to Moscow’s Basmanny District Court, Zaur Dadayev, who was detained Saturday, confessed his involvement in the murder and he will be held in custody until April 28, 2015.
Anna Fadeyeva, press secretary of the court, confirmed that apart from Anzor Gubashev and Dadayev, the other three suspects of the case have also appeared in the court. Among them, Shagid Gubashev is the younger brother of Anzor Gubashev, and the other two were only named as Eskerkhanov and Bakhayev.
Earlier in the day, the Russian Investigative Committee applied to the court for the arrest of the five suspects.
Nemtsov, former Russian deputy prime minister and an outspoken critic of President Vladimir Putin, was shot dead at about midnight on Feb. 27 near the Kremlin.
source »

Moscow’s Basmanny district court has arrested five people in connection with the murder of Boris Nemtsov, a prominent opposition figure, who was gunned down last week.
Two judges are reviewing the charges against the five people brought before the court by the prosecutors on Sunday.
Two of them are Zaur Dadaev and Anzor Gubashev, who were identified as key suspects in the killing of Nemtsov after their detention on Saturday.
The prosecutors asked the court to arrest the duo by April 28, the current deadline for the investigation, saying that otherwise they may flee or interfere with the investigation.
According to the judge, who ordered Dadaev’s arrest as requested by the prosecution, he confessed his involvement to the police. The accused didn’t comment on this during the court session.
Gubashev pleaded not guilty to the crimes he is charged with.

The other individuals, who may have had a hand in the crime, are Gubashev’s brother Shagit and two identified as Ramzat Bakhaev and Tamerlan Eskerkhanov. The request for their arrest has been reviewed separately by another judge.“The suspects denied their ties to the crime, but we have evidence of their guilt. It includes forensic evidence and eyewitness accounts,”an investigator told the court.
The trio denied their involvement, with Eskerkhanov claiming to have an alibi. But the judge ordered their arrests as well.
Eskerkhanov and Bakhaev have been remanded until May 8 and Shagit Gubashev – until May 7.
Nemtsov was killed by a gunman a few meters from the Moscow Kremlin, triggering a flurry of condemnations and calls for a swift investigation. The assassination happened two days ahead of an opposition rally, which Nemtsov helped to organize.
While political motive is considered the most likely in the killing, the investigators said they were considering other scenarios, including a business or personal conflict. Likely political motives behind the killing according to the investigators include a provocation aimed at destabilizing the situation in Russia, possibly by Ukrainian radicals, and revenge by Islamists for Nemtsov’s support of the French magazine Charlie Hebdo following an extremist attack.
source »