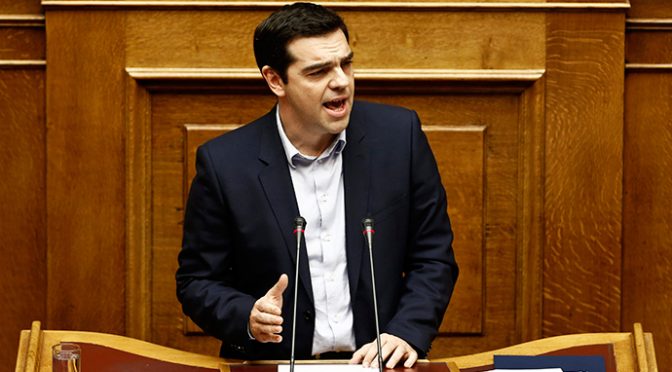 The Greek Revolution continues…
For at least two times in a row, the new Greek government were folding their cards against the EuroGroup powerplay only to stage a very uncomfortable counter-offensive against the Nazis who cannot escape from their horrid past.

Published time: March 11, 2015 09:25
Edited time: March 11, 2015 13:54
Germany says it won’t pay Greece World War 2 reparations after Greek PM Alexis Tsipras said Berlin is using legal tricks to avoid paying compensation. Germany says it’s honored its obligations, while Greece says it may start seizing German property.
Germany once again dismissed Greek demands to pay reparations for the 1941-44 Nazi occupation of Greece.
“It is our firm belief that questions of reparations and compensation have been legally and politically resolved,” said Steffen Seibert, the spokesman for German Chancellor Angela Merkel.
“We should concentrate on current issues and, hopefully, what will be a good future,” Reuters reported him as saying.
A spokesman for the finance ministry said there was no point in holding talks with the Greek government concerning the issue of reparations. The spokesman also added that the demands from Athens were just trying to distract attention away from the serious financial problems the country is facing.

With Germany refusing to budge from its position concerning the payment of war reparations, Greece’s Justice Minister said Wednesday that Athens could start seizing German assets.
Nikos Paraskevopoulos said he was “ready to approve” a Greek Supreme Court ruling in 2000 that would allow the appropriation of assets belonging to Germany’s archaeological school and the Goethe Institute. Proceeds from the property would be used to compensate the relatives of 218 civilians who were massacred by Nazi troops in a village in central Greece in June 1944.
“The law states that the minister must give the order for the Supreme Court ruling to be carried out…. I am ready to give that order,” Paraskevopoulos told Antenna TV, AFP reported.

“Germany has never properly paid reparations for the damage done to Greece by the Nazi occupation,” Prime Minister Tsipras told the Greek parliament Tuesday. “The crimes carried out by the Nazis are still vivid, and we have a moral obligation to remember what the forces did to the country.”
Greece has been trying to get Germany to pay war damages for decades, but Athens has never quantified its reparation claims. The movement to get Berlin to pay up has become stronger over the last few years as Athens experiences financial hardships following austerity measures, which were a prerequisite of being given the bailout money, to stop the country from falling into financial ruin.

Tsipras says 115mn DMarks given Greece by Germany in 1961 in no way covers forced loan and reparations for war crimes, infrastructure razed.

Tsipras says he will get a parliamentary commission to look into the matter, saying: “After the reunification of Germany in 1990, the legal and political conditions were created for this issue to be solved. But since then, German governments chose silence, legal tricks and delay.”
“And I wonder, because there is a lot of talk at the European level these days about moral issues: is this stance moral?” he said. 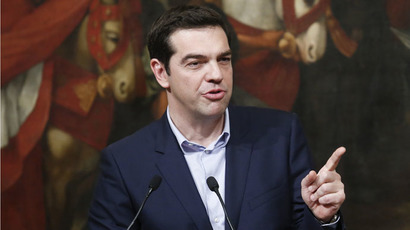 Read more​: Payback time? Greek PM seeks reparations over Nazi occupation & war-time loan
Berlin has flatly denied it owes Athens any more money, saying it has already settled its debts following German reunification in 1990. The “Two Plus Four” treaty, which involved East and West Germany, as well as the four occupying nations following the Second World War, France, the Soviet Union, the United Kingdom and the United States, saw them renounce all rights they formerly held in Germany. The document was also approved by Greece, which would effectively draw a line under any future possible claims for war reparations.
Germany says it paid Greece war damages of $25 million in the 1950s, equivalent to $220 million today, and also paid out 115 million Deutschmarks (a sum worth around $230 million today), to victims of Nazi crimes in the early 1960s.
Athens has said it always considered that money as only an initial payment and expected the rest of the money to be paid back following German reunification.
source »
We can help bring down the Cabal and defeat the Depopulation Agenda
One of the sources of funds for the Cabal is Big Pharma. It also serves as the weapon of mass destruction via vaccine tainted with live virus it is suppose to protect us from, and the deadly chemicals use to treat our diseases that they caused through our GMO / pesticide contaminated food supply.
We can avoid using drugs, defeat any viral attack and scaremongering easily by knowing how to build our own comprehensive antiviral system. Find more about it here.