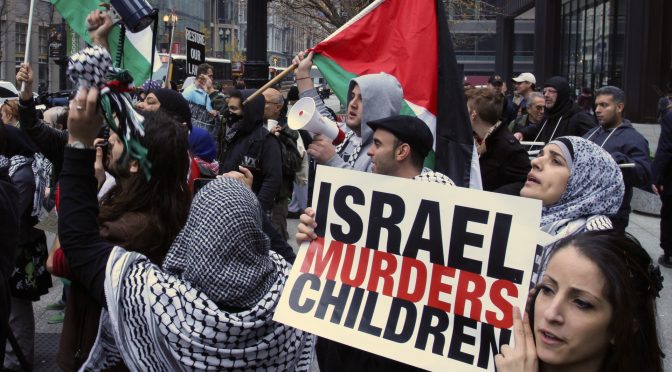 This bloodlusting Khazarian agent is feeling the pressure. Even inside Israel, people are beginning to distance themselves from him… even within his own political party.

Israeli Prime Minister Benjamin Netanyahu believes there is a “huge, worldwide effort” to make sure he does not get reelected in next week’s elections, which are expected to be extremely close.
The comments by Netanyahu to activists from his right-wing Likud party were broadcast by Army Radio on Tuesday.
“It is a very tight race,” Netanyahu said. “Nothing is guaranteed because there is a huge, worldwide effort to topple the Likud government.”
The radio interpreted the remarks as relating to advocacy groups funded from abroad pushing for a change of government.

Read more: Palestinian Authority arrests dozens of militant Islamists ahead of Israeli election
Although political parties in Israel are not allowed to accept money from foreign donors, nonprofit organizations can accept money from overseas and US consultants have advised candidates in Israeli elections for many years, Reuters reports.
Likud has said throughout the election campaign that groups such as V15, whose stated aim is to remove Netanyahu from power, are being funded by overseas donors.
But last month State Attorney Shai Nitzan did not find any connection between V15 and any particular political party, meaning that the group was not breaking Israeli laws.
V15 released its own statement after the Likud press conference after Nitzan decided not to prosecute.
“The state comptroller, attorney-general, Central Elections Committee and district court took the air out of the Likud’s spin and made a mockery out of the brown-nosing sycophants from the delusional press conference,” V15 said in a statement.
The latest poll for the Jerusalem Post found that the center-left Zionist Union would beat Likud by 24 Knesset seats to 22, although Netanyahu is seen as having a better chance of forming a governing coalition.
“Netanyahu is feeling the pressure … he is shooting in all directions,” Zionist Union leader Isaac Herzog told Israel Radio.
source »

Published time: November 04, 2014 11:22
Edited time: November 05, 2014 09:33
The largest-ever protest by Israeli top brass has taken place, with at least 105 retired generals and intelligence chiefs writing a letter to premier Benjamin Netanyahu, urging him to “initiate a diplomatic process” for peace with Palestine.
“We, the undersigned, reserve IDF commanders and retired police officers, who have fought in Israel’s military campaigns, know firsthand of the heavy and painful price exacted by wars…. Here we are again sending our children out onto the battlefield, watching them don their uniforms and combat vests and go out to fight in Operation Protective Edge,” the letter read.
A few of those who signed the letter told the state Mako-Channel 2 News that, in their opinion, Israel had the strength and means to come to a two-state roadmap to get out of the current crisis.
READ MORE: Israeli ministers pass bill jailing stone throwers for 20 years
The agreement wasn’t reached due to “weak leadership,” the country’s top brass added.
“We’re on a steep slope toward an increasingly polarized society and moral decline, due to the need to keep millions of people under occupation on claims that are presented as security-related,” reserve Major General Eyal Ben-Reuven told the channel.
“I have no doubt that the prime minister seeks Israel’s welfare, but I think he suffers from some sort of political blindness that drives him to scare himself and us,” he added, Haaretz reported.
The idea of writing the letter belonged to reserve Major General Amnon Reshef, who said in an interview he was “sick and tired of a reality of rounds of fighting every few years, instead of a genuine effort to adopt the Saudi initiative,” Ynetnews.com quoted him as saying.
He referred to the Saudi peace plan adopted in 2002 that offered full peace for Arab states and Israel. Tel Aviv, in turn, was to withdraw to borders based on the pre-1967 armistice lines.
READ MORE: ‘This is apartheid!’ Israeli minister blasts bus segregation for Palestinians
Among the signatories to the protest, 101 are IDF veterans with the rank of brigadier or major general, two are ex-chiefs of the Mossad intelligence agency and three former commanders of Israel’s National Police, Haaretz reported.
It’s not the first collective effort of the Israeli top brass to urge the country’s leadership to step up the peace drive.
For instance, almost three years ago, 52 former generals signed a petition calling for a law to make military or equivalent national service compulsory for men who practice Haredi Judaism.
And in November 2011, 19 ex-top brass urged the IDF chief of staff Benny Gantz to fight against increasing religious extremism in the military forces.
The latest letter comes a week after Prime Minister Benjamin Netanyahu announced plans for around 1,000 new settler homes to be built on occupied Palestinian land. This triggered an alarmed response from the Palestinian authorities.
source »
One of the sources of funds for the Cabal is Big Pharma. It also serves as the weapon of mass destruction via vaccine tainted with live virus it is suppose to protect us from, and the deadly chemicals use to treat our diseases that they caused through our GMO / pesticide contaminated food supply.
We can avoid using drugs, defeat any viral attack and scaremongering easily by knowing how to build our own comprehensive antiviral system. Find more about it here.