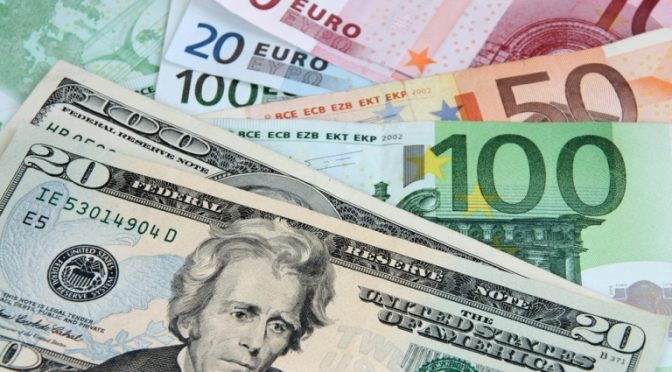 This is obviously part of the gradual global currency reset which is now beyond the control of the banksters.

Euro spirals toward 1:1 parity with USD

The euro and the dollar are nearly trading one for one, as the EU single currency continues to fall to new depths after the announcement of the ECB’s quantitative easing, the €1.1 trillion bond-buying program launched Monday.
In early trading Tuesday, the euro lost more than 1 percent against the dollar to $1.0586, its lowest since March 2003.
At the time of publication, $1 buys €1.06, whereas a year ago it bought 1.36, a more than 30 percent fall in value.
The euro has been on a steep decline since the European Central Bank announced its loose monetary policy in December. Since the start of 2015, it has lost more than 14 percent. Source: European Central Bank
“It’s the euro versus everything,” Stephen Gallo, European head of FX strategy at BMO Capital Markets in London, told Reuters.
Against the pound, the euro dropped 1.15 percent, with one euro now buying only 70.18 pence, the weakest since November 2007.
“The way these moves look is if it’s not just speculators piling into euro shorts, it’s actually a net flow of capital out of the euro,” Gallo said.
Other factors affecting the euro which is used by 19 countries, is the looming possibility Greece may again fall into a sovereign debt crisis and possibly leave the eurozone, which would send the currency sinking even further. ECB officials, along with IMF and European Commission, visit Athens Wednesday to discuss terms of a bailout extension.
Another stressor is the resurgence of the greenback after it underwent its own quantitative easing from 2008-2014. Falling oil prices also contribute to deflation, or lower prices, across Europe.
[soundcloud url=”https://api.soundcloud.com/tracks/187318079″ params=”color=00cc11″ width=”100%” height=”166″ iframe=”true” /]
The European Central Bank launched its €1.1 trillion bond-buying program on Monday. The program will pump new money into the economy via central banks buying sovereign bonds in order to jumpstart the EU economy and steer clear of deflation. Inflation is hovering close to zero and nowhere near the ECB’s 2 percent target.
source »

March 11, 2015—The European Central Bank (ECB)’s new quantitative easing program is only adding to the disaster of the Eurozone’s banking system.
The ECB is supposed to buy 1 trillion euros of European government bonds by mid-2016, trying to copy the Federal Reserve’s “success” in raising the stock and bond markets far above the heads of American households and businesses whose livings standards are sinking.
But because of the huge proportion of “toxic” securities and bonds in the European banking system, the ECB’s efforts at mass buying of “asset-backed securities” and “covered bonds” from the banks, failed from December to February. Now, the government bond-buying binge may also fail, with much worse consequences.
The ECB tried to follow its own charter, by telling European central banks to avoid buying government bonds with negative interest rates, for just two days. It switched course Wednesday morning and “purchased debt with negative yields, including that of Germany and the Netherlands,” according to Bloomberg in an article headlined “ECB Chasing Own Tail as Interest Rates Turn Negative.” This amounts to providing “fiscal support” to governments, by the ECB paying them interest money. “Fiscal support” is barred by the ECB charter.
And as the headline implies, more and more government bond interest rates are going negative across Europe as the ECB prints money and buys them directly from governments. So it either tears up the charter and buys bigger and bigger volumes of negative-interest-rate bonds—”buying losses”—or it lets the government bond-buying program fail to meet its 1 trillion euro target, which itself will shake the bond markets and the European banks.
The euro currency fell rapidly in value again today, with the ECB claiming that this was ‘deliberate’ on its part, to try to create inflation. It is indeed creating hyperinflation, but only of huge asset bubbles in the stock and bond markets, which it is driving to a crash.
source »
One of the sources of funds for the Cabal is Big Pharma. It also serves as the weapon of mass destruction via vaccine tainted with live virus it is suppose to protect us from, and the deadly chemicals use to treat our diseases that they caused through our GMO / pesticide contaminated food supply.
We can avoid using drugs, defeat any viral attack and scaremongering easily by knowing how to build our own comprehensive antiviral system. Find more about it here.