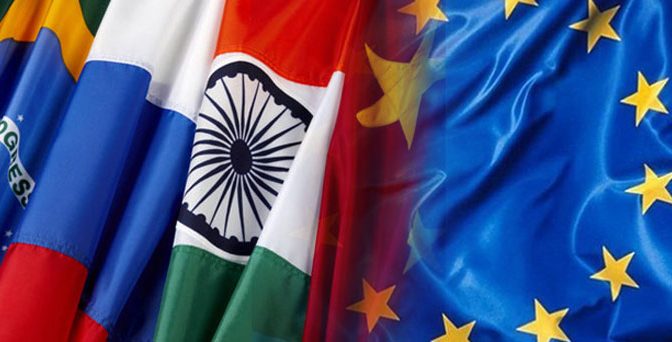 The new China-led Asian investment bank, a potential rival to institutions such as the Asian Development Bank and the World Bank, has enlisted more US allies as members after Britain decided to join last week.
The membership of the Asian Infrastructure Investment Bank (AIIB) is set to expand further, with three more European countries following Britain’s lead.


France, Germany and Italy have defied US instructions not to participate in the Bank, said UK daily, The Financial Times.
The decision of the three European countries, yet to be officially announced, came in the wake of Britain’s application last week to be a founding member of the $50 billion bank.
Meanwhile, Australian leaders have been lining up in the past few days to voice support for joining the AIIB, which marks a conspicuous U-turn from the cabinet’s previous stance.
“Our position all along has been that we are happy to be part of some thing which is a genuine multilateral institution such as the World Bank, such as the Asia Development Bank,” Prime Minister Tony Abbott said during an interview with Sky News over the weekend.
In addition, South Korea, Switzerland and Luxembourg are deliberating over the decision to participate in the infrastructure investment Bank.
In a last-ditch attempt to hinder its allies’ participation in the China-backed Bank, US Assistant Secretary of State for East Asian and Pacific Affairs Daniel Russel said in Seoul on Tuesday that there must be “unmistakable evidence” about the standards of the Bank before members join in.
“Every government can make its own decision about whether the way to achieve that goal is by joining before the articles of agreement are clarified or by waiting to see what the evidence looks like as the bank starts to operate,” the US official was quoted by Reuters.
China, with $4 trillion in foreign exchange reserves, is pushing for the growth of its own multilateral bodies, including the AIIB, the BRICS Bank and a bank for the Shanghai Cooperation Organization, but also seeking to strengthen its voice at the World Bank and the International Monetary Fund.
As regards Japan, Chinese Finance Minister Lou Jiwei said earlier this month that the chance to be an AIIB founding member is available for all Asian countries including Japan by March 31, and the ball is in Japan’s court.
“They told us they are considering. Whether Japan will join, we do not know. It is Japan’s own decision,” Lou said.
Nearly 30 countries have confirmed their participation in the AIIB, which is aimed at helping finance infrastructure projects across Asia and expected to be operational within 2015.
In response to US concerns about the standards of the AIIB, Chinese Foreign Ministry spokesman Hong Lei said last week that the AIIB’s operation and governance will be open, transparent, inclusive and responsible.
“It will draw experiences from other multilateral development banks and avoid their detours so as to be more cost-effective and efficient,” he told a press conference.
“The AIIB will complement existing multilateral development banks and support the infrastructure and economic development in Asia,” he added.
TBP and Agencies


SEOUL/BEIJING (Reuters) – A senior U.S. diplomat said it was up to individual countries whether to join a new China-led international development bank as media reports said a growing number of close U.S. allies were ignoring Washington’s pressure to stay out of the institution.
France, Germany and Italy have agreed to follow Britain’s lead and join the Asian Infrastructure Investment Bank (AIIB), the Financial Times reported, quoting European officials.
The newspaper said the decision by the four countries to become members of the AIIB was a major diplomatic setback for Washington, which has questioned if the new bank will have high standards of governance and environmental and social safeguards.
The bank is also seen as contributing to the spread of China’s “soft power” in the region, possibly at the expense of the United States.
EU parliament president Martin Schulz said he welcomed the four European nations joining the AIIB, but added the bank must conform to internationally accepted standards.
“I find it good that they join,” he told reporters while on a visit to Beijing. “If more member states would join I would find it even better.
“There is one additional element. Such new organisations must answer to the requirements of international standards. That is quite important.”
China’s state-owned Xinhua news agency said South Korea, Switzerland and Luxembourg were also considering joining.
However, Chinese foreign ministry spokesman Hong Lei would not comment on which countries had applied to join, and repeated that the bank would be “open, inclusive, transparent and responsible”.
On Tuesday, Washington’s top diplomat for east Asia signalled that concerns about the AIIB remained, but the decision on whether to join was up to individual nations.
“Our messaging to the Chinese consistently has been to welcome investment in infrastructure but to seek unmistakable evidence that this bank…takes as its starting point the high watermark of what other multilateral development banks have done in terms of governance,” U.S. Assistant Secretary of State for East Asian and Pacific Affairs Daniel Russel said in Seoul.
“Every government can make its own decision about whether the way to achieve that goal is by joining before the articles of agreement are clarified or by waiting to see what the evidence looks like as the bank starts to operate,” he told reporters.
WORLD BANK RIVAL
The AIIB was launched in Beijing last year to spur investment in Asia in transportation, energy, telecommunications and other infrastructure. It was seen as a rival to the Western-dominated World Bank and the Asian Development Bank.
China said earlier this year a total of 26 countries had been included as founder members, mostly from Asia and the Middle East. It plans to finalise the articles of agreement by the end of the year.
A finance ministry official in India, one of the countries that has joined, said the members of the AIIB would meet in Almaty, Kazakhstan, on March 29-31 to discuss the articles of agreement.
China has said March 31 is the deadline for accepting founder-members into the organisation.
Japan, Australia and South Korea remain notable regional absentees from the AIIB, although Australian Prime Minister Tony Abbott said at the weekend he would make a final decision on AIIB membership soon.
South Korea has said it is still in discussions with China and other countries about its possible participation.
Japan, China’s main regional rival, has the biggest shareholding in the Asian Development Bank (ADB) along with the United States and the Manila-based bank is headed by a Japanese, by convention.
Japan is unlikely to join the China-backed bank, but the head of the ADB, Takehiko Nakao, told the Nikkei Asian Review that the two institutions were in discussions and could cooperate.
“We’ve begun sharing our experience and know-how,” Nakao was quoted as saying.
“Once the AIIB has actually been established, it’s conceivable that we would cooperate,” he said.
(Reporting by Ju-min Park in SEOUL, Michael Martina and Ben Blanchard in BEIJING, Manoj Kumar in NEW DELHI and Leika Kihara in TOKYO; Editing by Raju Gopalakrishnan)

One of the sources of funds for the Cabal is Big Pharma. It also serves as the weapon of mass destruction via vaccine tainted with live virus it is supposed to protect us from, and the deadly chemicals used to treat our diseases that they caused through our GMO / pesticide contaminated food supply.
We can avoid using drugs, defeat any viral attack and scaremongering easily by knowing how to build our own comprehensive antiviral system. Find more about it here.